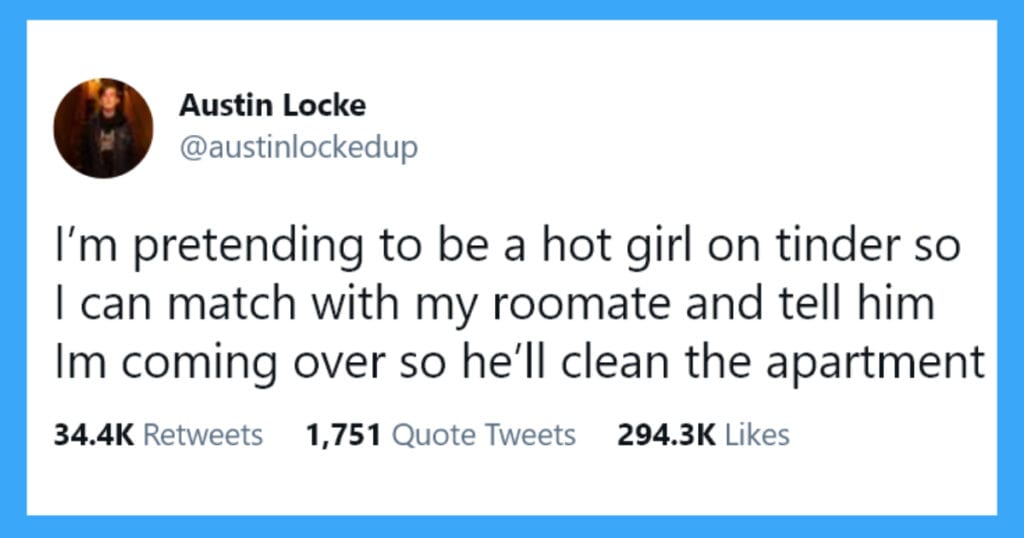 15 Life Tricks That Are So Dumb They Just Might Work

I’ll let you in on a little secret: nobody knows what’s going on in this life.

Absolutely nobody knows what they’re doing and we’re all guessing all the time.

So before you dismiss someone’s idea as stupid, stop for a moment and consider that every idea in the history of stuff was once considered such, right up until we realized it was actually working.

Here are a few new ideas, via Twitter, that you might want to consider implementing in your own life.

Because if it’s stupid and it works, then how stupid can it be?

You really can’t beat the speed.

My wife and I are sitting on the couch watching tv and I hear a text, realizing I left my phone in the kitchen, I get up, go to the kitchen to check it…

and its a text from my wife:

Please bring the chips on your way back

This would be the only way to pull it off.

Prove to me that this wouldn’t work.

Deer population is controlled by releasing wolves into an area. All problems should be solved that way. Too much pollution? Release wolves in factories. Dislike Congress? Wolves. Wanna lose weight? That's right, wolves.

12. The gifts that keep on giving

Honestly this sounds like it would be worth a shot.

tip for newlyweds: send a wedding invite to every billionaire whose address you can find because it's a 50/50 chance their assistants just send you a perfunctory gift without ever wondering who the hell you are

I cannot imagine being this motivated to have a cow rug, but go off.

Last week I duct taped two rugs together bc I don’t have $500 for a custom pink cow rug pic.twitter.com/5iziESzwNC

It’s a neat trick to avoid revealing your true stupidity.

If you can't think of a word say "I forget the English word for it". That way people will think you're bilingual instead of an idiot.

Keep that anguish where it belongs.

Pro-tip: Never be sad on a holiday/weekend. Cry on a workday. Get paid for your depression.
Don't let capitalism win.#ThursdayThoughts

@lizmiele I signed up for a zoom workout class that was too advanced so when the instructor said “do a plank and bring your knee to the opposite elbow,” I did a modified version where I turned off my computer and made pancakes

7. The bite that bites back

If you get bitten by a shark, bite it back. You’ll still probably die but the shark will be like “lol what”

6. How the tables have turned

new tinder idea: upload all my photos upside down so girls turn their phone to look at them, obviously realise am ugly and swipe left but of course that's now actually right bing bang boom match

I just saved a TON of money on Christmas presents by discussing politics on social media.

Gotta use your head. And arms, I guess.

A lot of people at the gym go and lift the big weights. But actually, the small weights are lighter and much easier to lift.

It’s all a balancing act.

always work on two projects at once. that way you can procrastinate on project A by messing around on project B, and when you get tired of project B you can waste time by working on project A. you will be twice as productive while doing nothing but procrastinate

Be sure to maintain eye contact in order to engender trust.

Don't embarrass a guy by telling him his fly is open in public.

Just be a man, walk over there, and slowly zip it up for him.

I couldn’t decide if I wanted bangs or not so I cut bangs for my daughter and she looks awful. Dodged a bullet there.

I think all those ideas are gonna work out juuuust fine.

What’s been your best idea recently?

Brainstorm with us in the comments.