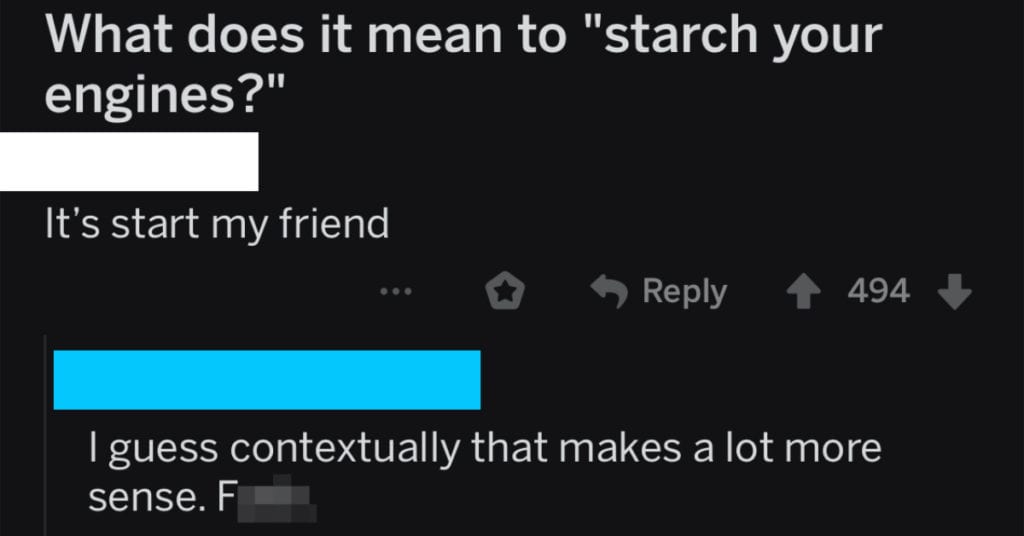 Ready to learn your word of the day? Merriam-Webster defines “Malapropism” as:

The usually unintentionally humorous misuse or distortion of a word or phrase
especially : the use of a word sounding somewhat like the one intended but ludicrously wrong in the context
“Jesus healing those leopards” is an example of malapropism.

The example they give there is pretty good – “leopards” put in place of “lepers.” But I’d argue that these 15 examples from the subreddit r/BoneAppleTea are way better. Check ’em out.

Don’t forget to iron them while you’re at it.

Starch your engines from BoneAppleTea

I’d definitely tune in for a roast of history.

Some people just have no class.

Come on man, don’t be shellfish about this.

My brain needs to take a nap after this one.

They are cinnamons! from BoneAppleTea

What did he do this time?

Eggs been a dick! from BoneAppleTea

I mean, I couldn’t pick ’em out of a lineup.

Give this man a degree in music history right now.

Steak and Snow from BoneAppleTea

They were having a perfectly good family time and you ate them? You monster.

THIS IS A REPOST from BoneAppleTea

It’s good to know that bigotry is still as stupid as ever.

Nate Of Americans is a repost. Please stop it. from BoneAppleTea

I don’t know much, but I know what I like.

I’m afraid you have a much more serious case of tomorrow boobs.

How do you go out of your way to find the n with the tilde and still not know what you’re saying?

MAY the chicken cross the road?

I too love chicken permission from BoneAppleTea

And there you have it, you learned a new word! Unless you already knew that word, in which case you still learned a bunch of hilarious new examples of it. Either way, this definitely counts as educational and you should be proud of yourself.

What’s the funniest example of this sort of thing that you’ve seen?