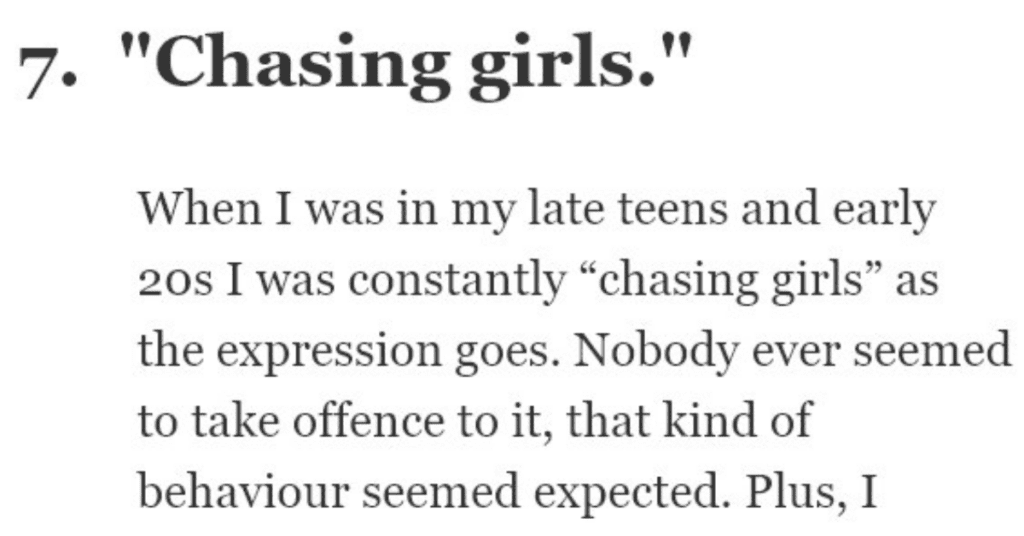 15 Ways Guys Were Forced to Face Their Creepy Behavior

There’s an old saying that goes something like, “If one person calls you a horse, they’re crazy. If ten people call you a horse, it’s time to buy a saddle.”

In other words, at a certain point if you’re being accused of something enough, you need to listen. Like, being a creep, for example.

For men who used to be "creepy" towards women and have since stopped, what was it that made you realize you were creepy that prompted you to change? from AskReddit

How are we dealing with this sort of thing? Let’s find out what Reddit has to say.

Seriously has helped me improve a lot of things

Ooooo. Man I it took me recognizing I was addicted to alcohol, tobacco, pornography, and sex. I had been aggressive toward women and objectifying them since I was a child. I think this happened because I was exposed to sex at such a young age. I thought all relationships were supposed to be how movies and shows were so I just emulated what I saw.

Once I got sober I realized how much of a monster I was and took the necessary steps to really implement change in my life. Lots of therapy. Lots of crying. Self reflection as to why i was emulating that specific behavior, and quitting my addictions. It’s been a journey, but I’m happy to say I’ve been in a loving committed relationship with proper boundaries for a year now.

3. A matter of perspective.

I didn’t have any sisters, and no female friends growing up. Girls were always this magic unknown entity, who were capable of sex. So I was always awkward around them, because I didn’t know what to do or say. I didn’t want to accidentally offend anyone or say something stupid. So I pretty much said nothing.

In my last year of high school, I spent more time around girls and realized that they really aren’t that different than my male friends. They make the same d*ck jokes and stuff. They have the same goals in life. So slowly, I learned to relax a bit and treat women like normal human beings, just like everyone else.

In middle school, I was a mid-puberty, horniness-stricken, little perv. I didn’t do a good job of concealing it either, I would always get really close to my one friend because I liked her at the time and looking back it was so wrong to do

It took me looking at what they were thinking and how my behavior affected them to really stop being creepy. Hindsight helps a lot as well.

Growing self-awareness that I wasn’t the centre of the godd*mn universe.

Went through a chasing-potential-girlfriends-too-hard phase in my earlier adult years, including mistaking simple offers of friendship and work colleague status for actual interest. It wasn’t “stalking” level and it never reached the point of discipline (or even commenting), but it was probably to the point of being a little unprofessional and uncomfortable for the girl involved.

That was decades ago and I’m now with a company that doesn’t tolerate that sort of thing.

When I was in my late teens and early 20s I was constantly “chasing girls” as the expression goes. Nobody ever seemed to take offence to it, that kind of behaviour seemed expected. Plus, I always seemed to be able to find someone who was interested in hooking up.

Then I got married so obviously I stopped. I found myself single again 10 years later and quickly reverted to my old ways. It wasn’t long before I realized that things that I could get away with at 21 no longer worked at 32. In fact, based on the reactions of a couple of women, I realized I was being creepy. Of course the women I was perusing where also older too.

I realized I had to take a more mature approach. Things went much better after that, but I still cringe to think of some of my early attempts to get back in the game.

When I broke up with my first serious girlfriend, I was totally heartbroken.

I called her all the time, cried on the phone. I even threatened to kill myself and told her so. This went on for some time.

Eventually I threatened again to kill myself and went to bed drunk. I woke up to a voicemail from her crying her eyes out begging me not to do it.

I was so ashamed about my behaviour. I realised in that message what I had become. It was absolutely her right, as it was mine, to end a relationship at any time for any reason, without being hounded and traumatised by the ex. I was evil and toxic. I apologised and promised never to do it again.

After that I left her alone. I was still heartbroken, but i found comfort in my friends, and in activities and hobbies instead. I had several failed relationships after her, but i never again treated a woman this way.

This was over fifteen years ago and now I am married. I have been tempted many times to contact her and apologise some more for my behaviour, but the truth is, she is better off without me in her life. I hope she is well.

I’m a lady (26F) who has been creeped upon and one of my old bosses (70M) would grope and kiss me during meetings and in front of other people and employees.

He didn’t stop until a CEO friend of his got “MeToo”-ed and their company went under. I guess he finally realized that could happen to him too. Even now he’ll say things that are on the fence of inappropriate and complain about how people “can’t take a joke anymore.” 🙄

Maturity finally caught up with me.

I had one particularly bad experience with a girl “A” who I think was genuinely interested in me at one point, but I was super awkward and didn’t have a clue how to act right, so I never really made a move beyond sad attempts at flirting, and so I think she eventually just thought I was a weirdo who wouldn’t leave her alone.

Then one day we were both in a big group of people just talking and a mutual friend completely out of the blue suggested that A should ask me out, and what followed was possibly the single most uncomfortable moment of my entire life to date. “A” pretty much turned white and she was out of there. I’m sure she believed that I had put our mutual friend up to it. I had not. If anything I was just as horrified.

That single event shattered my self-confidence so completely that I spent the next year and a half actively avoiding any kind of conversation or interaction with girls, because I had concluded that I must be a Creep and therefore the right thing to do was to protect girls from my Creepiness by isolating myself.

Eventually I kind of figured myself out and by my early 20s I was still awkward as h*ll but I managed to have a couple of relationships and plenty of platonic female friendships.

I have five sisters, and hearing them talk about something creepy a guy did really made me check my own actions.

Also, I think a lot of us were just hormonal teenagers with a typical, insane libido. Getting called out normally works

Being called out. Directly and specifically.

But some specific things I did were called out (touches on the arm, inappropriate topics of conversation, things like that) and I realized holy crap, I have been a total disrespectful creep.

And everyone knows it.

I don’t miss my teen years. Don’t miss ’em at all.

On the plus side, it encouraged me to strive for a life where I’m 100% genuine and don’t want anything from anyone.

My creepiness came from not knowing how to talk to girls, not anything predatory. I think a lot of guys are like that.

I wasn’t particularly creepy but I look back on some stuff I did or said that I thought was smooth or flirty but looking back at it now I’m like wow I was actually being creepy lmao.

Looking back I was like most other males born in the 70’s and did not know better. I then became friends with women and learn what women want in a person.

The coup de grace was when I was hanging out with some gay men who flipped the creepy vibe on me.

The result was a bumble date voted me the most charming man she dated.

Honestly, reading these over has brought to my mind a handful of my own now-super-embarrassing moments of creepiness or selfishness, along with the realization that there are likely many more I’m not even remembering. That feeling can be hard to deal with, but the silver lining is that if you’re regretting, that means you’re growing.