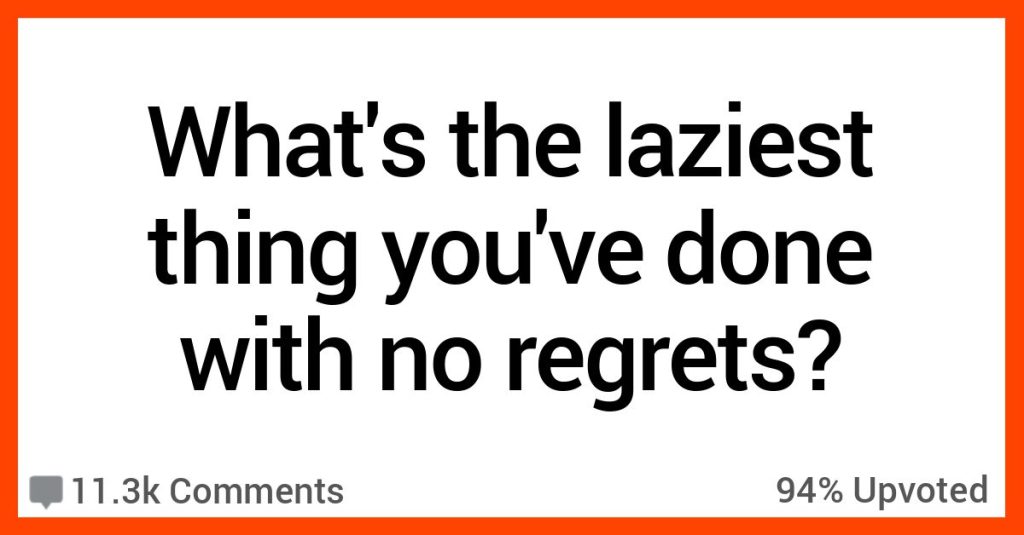 I know that for the most part, human beings are good and smart and innovative and all of that, but also, there’s a flip-side to every coin. For most of us, we have days (or a spate of days) where we’re not exactly useful and often downright lazy, because hey, we have to recharge, right?

These 30 people really took that to the extreme, though, and honestly…I’m kind of jealous.

Solution? Keep a laser pointer on my nightstand.

Once dog decides where he’s sleeping, I’ll shine the laser pointer on the door so that my cat paws it closed. It has now become a routine that my cat will wait by the door for the laser before laying down.

In order to not walk 5 feet to my bed, I decided to fall sleep on my recliner, pulling down the window shade a little extra, so I could use it as a blanket.

28. Okay now that is terrible.

Had the pizza guy deliver a pizza.

I lived above the pizzeria.

26. Sometimes you just gotta throw in the towel.

Here are a couple:

Roommate was on the other side of the apartment, maybe 20 feet away, and we’re both using our computers. Sent him an instant message to find out what he was doing and if he wanted to go grab some lunch.

Came home and tripped in the doorway, falling flat on the floor. I kicked the door shut with my foot and fell asleep for three hours.

25. Wow. Even clapping is too much work.

Used to have one of those ‘clap on, clap off’ lights in my room.

I hated clapping so I just made an audio recording of me clapping and mapped it to one of the programmable keys on my keyboard.

I was laying in bed with the light on and wanted to sleep with it off. i called my house from my cell phone and asked for myself in a disguised voice.

When my mom came in to bring me the phone i asked her to turn the light out when she left. hung up both phones and went to sleep

23. I have been this tired but rarely.

Shot ~10 nerf darts at my light switch, from bed.

Missed all of them and slept with the lights on.

Called my mom’s office line from the living room to ask her a question. She has a home office.

21. Putting together furniture is the worst.

Slept on the floor for a year instead of putting together my assembly bed.

EDIT: I put it together today. Snapped a couple photos on my dads terrible… just terrible phone. Now I have an Imgur account, too, after a year on reddit with so many great photos to share but not enough motivation to create an imgur account.

EDIT: I just flushed my gum down the toilet because the trash can was in the kitchen. Someone stop me.

EDIT: Now I know why powerusers like /u/unidan and /u/vargas enjoy and spend so much time on reddit. Its because they’re mostly replying to real people and engaging in conversation rather than “click”… “click”… ^^^…

I always heat things in the microwave for 1:11 or 2:22 because I’m too lazy to move my fingers to the 0 before I hit start.

19. The sun needs to stop bothering him.

Late to the party but this one is too good to pass up:

I was once on a US military ship, having breakfast in the wardroom (officers lounge) when the Operations Officer (OPS) walks in. This guy was the definition of NOT a morning person; he’s still half asleep, bleary eyed… basically a zombie with a bagel. He sits down across from me to eat his bagel and is just barely conscious. My back is to the outboard side of the ship, and the morning sun is blazing in one of the portholes putting a big bright-ass circle of light right on his barely conscious face. He’s squinting and chewing and basically just remembering how to be alive for today. It’s painful to watch.

But then zombie-OPS stops chewing, slowly picks up the phone, and dials the bridge. In his well-known I’m-still-totally-asleep voice, he says “heeeey. It’s OPS. Could you… shift our barpat… yeah, one six five. Thanks.” And puts the phone down. And then he just sits there. Squinting. Waiting.

And then, ever so slowly, I realize that that big blazing spot of sun has begun to slide off the zombie’s face and onto the wall behind him. After a moment it clears his face and he blinks slowly a few times and the brilliant beauty of what I’ve just witnessed begins to overwhelm me. By ordering the bridge to adjust the ship’s back-and-forth patrol by about 15 degrees, he’s changed our course just enough to reposition the sun off of his face. He’s literally just redirected thousands of tons of steel and hundreds of people so that he could get the sun out of his eyes while he eats his bagel. I am in awe.

He slowly picks up his bagel and for a moment I’m terrified at the thought that his own genius may escape him, that he may never appreciate the epic brilliance of his laziness (since he’s not going to wake up for another hour). But between his next bites he pauses, looks at me, and gives me the faintest, sly grin, before returning to gnaw slowly on his zombie bagel.

18. The secret to a happy relationship.

My roommate and I arranged our dorm room to be “lazy-capable.” One person was able to reach the mini fridge and light switch from her bed, and the other could reach the the window and AC/ heat from her bed….

I was drunk one night and decided the bathroom was to far away. So I pissed in my cats litter box.

Didn’t feel like cleaning it up in the morning so I just threw the whole litter box in the garbage.

A large didgeridoo made out of tree limb, that I bought when I was in Australia and had shipped back to the US. I cannot play it, and it just sits there.

13. Someone is ready for the apocalypse.

A broad sword and shield.

I’m not a re-enactor, these aren’t hanging on my wall… not sure why I still keep them in the garage.

The resale value on them was so poor (thanks to ridiculous new editions coming out each semester rendering these books useless for future students), that I figured it would be better to keep the texts as resources down the road.

Then the internet erupted and now all that information (and way more) is available at the click of a mouse.

I only have one shower. It’s perfectly fine. I’m still not sure why I bought it.

10. This guy is somehow winning in my book.

I was going to say “The ceramic blue bird statue that I found next to a dumpster” but then I remembered that I bought an antique brass birdcage to put said statue in. It doesn’t do anything besides hold my garbage bird and a succulent.

So, I guess my answer is “The antique brass birdcage for my garbage bird statue.”

Six or seven pillows that live on my couch. If I want to sit, or lay down, the first thing I have to do is move a bunch of pillows so I can relax in comfort.

Where do I put them? Do I have to put them back when I’m done? How much was spent on these comfort obstacles? Son of a.

In the basement, we have two fake Christmas trees. One would be useful. But we have two. In a few days I’m going to bring one upstairs and decorate it for the holiday, and the other one will sit in the storage room. I genuinely don’t know why we have two.

Edit: I can’t believe it never occurred to me to give it away/sell it for cheap to someone who can’t afford a nicer tree this Christmas. Thanks to everyone who suggested that! Also a surprising amount of people asked to buy it from me, so hopefully it will be going to a good home. I messaged the first person to message me about it, but now I wish I had trees to ship to all the people who have said things about not having a tree this year. ❤️

7. I still have my college ID.

I still have my Blockbuster card.

A bunch of sweaters and hoodies. I live on an island country and it doesn’t get cold at all.

5. Eh, being an adult is overrated.

I’ve never got rid of a broken laptop. Over the past decade or so I’ve managed to rack up five of them that I’ve somehow convinced I’ll one day do something with, as if anyone’s just waiting for me to show up with a 2008 HP with a broken keyboard and a wobbly power socket.

I moved house earlier in the year and, rather than doing the sensible adult thing and taking the opportunity to throw them out, I brought the f**kers with me.

I spent a f**king sh^t load of money on getting 2 separate master’s degrees. So them equally.

My mum, bless her, once bought me a pencil case made entirely out of zips. (So you can unzip it from every possible angle).

ETA: Oh no, my mum definitely is not useless! Weird wording!

2. Everyone has that one kitchen appliance.

“Yes! I will set it up the night before so I get fresh bread every morning!”

It lasted a week before I went back to making bread the way my Grandma taught me.

Now I’ve lost a few of its bits, and the only time I’ve touched it in 10 years was when we moved house, and it moved from the top shelf of one pantry to another.

I own a useless box.

The one with the switch that causes one side to open and a small metal arm to pop out and turn itself off.

Y’all, I think that we can all relate to these posts a little more than we’d like to!

What’s your laziest moment? What have you nabbed that turned out to be totally useless? Tell us about it in the comments!