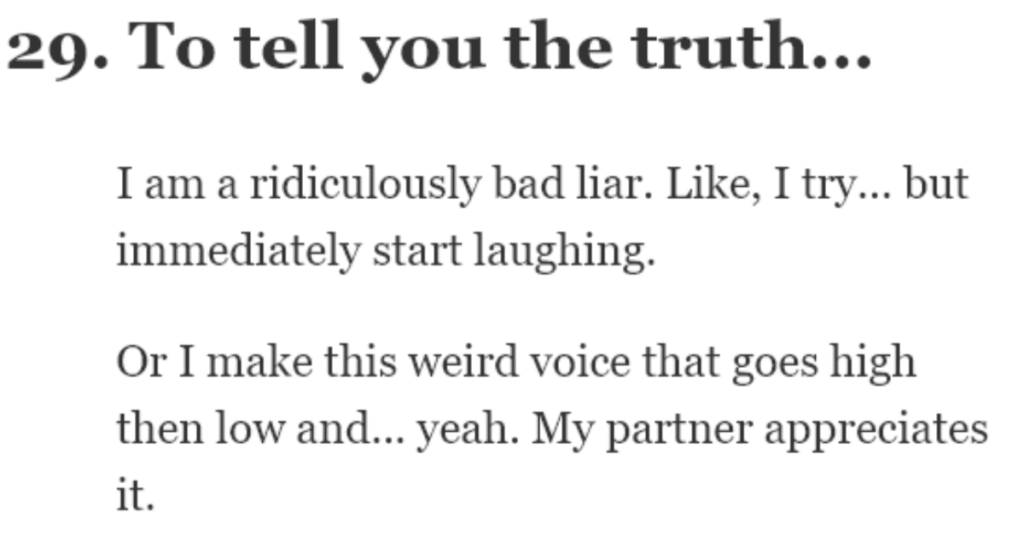 30 Things That are Really Frustrating to Be Bad At

Do you ever just get incredibly self-conscious about the little things in life that you’re bad at? Like, unreasonably worried about it? As though when you die, your eulogy will just be someone listing all the stuff you couldn’t do right?

It’s helpful to take a step back and realize that everybody sucks at something, and honestly, it’s fine. Have a laugh at it and move on. Like these folks did when they self-admitted which skills they were “hilariously bad” at.

What are you hilariously bad at? from AskReddit

There were over 13 thousand comments on Reddit. Since you’ve got stuff to do today, here are just a few, ranging from social skills to just…skills, or a lack thereof. Do any of them ring true for you?

1. It’s hard to keep these things under wraps.

Wrapping gifts. It looks like an angry drunk person’s attempt every time.

If you watched me try to parallel park, you’d be convinced I was f**king with you.

I don’t even come close. And I’m trying really hard.

My goal is to spell a word, not correctly, but correctly enough so that the predictive text can figure it out, and can show me the real spelling of the word.

I often fail even at that though, so my last resort is always Google…

Under threat of death I still wouldn’t be able to whistle.

I’ve read the tips, I’ve practiced, I’m still basically just spitting or forcefully breathing through pursed lips with no noise at all.

5. This one will get you in trouble.

Remembering dates, even my own birthday.

Winking. I CANNOT wink for the life of me.

My friends are constantly harassing me for my inability to wink. It’s awful.

Why can so many people just shut one eye?! It seems so simple, yet I just CANT.

Dancing. I genuinely cannot coordinate my body to do it

8. I can feel the panicked-pocket-pat just reading this.

Finding my keys, wallet, and phone right before I have to leave

10. This is a real neurological phenomenon, you’re not alone.

When somebody says to go left or to go right I just get a brainfart.

Friends and family just point out the way now for me.

I wrote L and R on my hands during the lessons for my drivers license.

11. The ice we skate is gettin’ pretty thin.

I literally just fall on my **s immediately.

Even with YouTube videos literally stepping me through it, I still manage to f**k things up.

13. When you’re so bad you invent a new form of spectator sport.

Golfing. I went to the drive range with my dad once, I was so terrible other people stopped playing just to watch me suck.

People who were paying to be there decided I was more entertaining than playing.

14. Some human flaws are universal.

When I smile, it looks like there’s a gun being pointed at me behind the camera.

Usually I grow a big beard once a year or so. A couple of years ago my friend had this majestic beard.

I felt that it was awesome so I decided to pump it up by growing for 5-6 months. When I shaved it of I started to laugh because I couldn’t remember how I looked.

18. This is the dating conundrum.

I am so bad at it when I’m trying. I’m such an awkward person.

I always tell the punch line too soon or b**tardize it in such a way that it’s no longer funny.

The hubs always gives me grief.

20. I’ve literally forgotten my own sister’s name before.

Remembering names. I don’t know why but I can’t remember names.

I’ve forgotten names of people I’ve known for years and talk to them regularly.

Comforting or consoling a crying friend…

23. It’s hard to put yourself out there.

24. Why are phones even called phones at this point?

Speaking on the phone.

I will stare at my phone waiting for it to go to voicemail or send me a text.

Saying hi, have a good day and how are you doing. Idk why, but It always comes out weird.

Being emotional, even towards my own family.

I can’t even say “I love you” It just makes me cringe.

Gaming, I have so many friends who want to game with me, and when I say yes they try to be polite but end up laughing at me… :,-)

28. I run late so often it’s basically a marathon.

Getting somewhere on time. I am working on it though

I am a ridiculously bad liar. Like, I try… but immediately start laughing.

Or I make this weird voice that goes high then low and… yeah. My partner appreciates it.

He already knows I’m proposing on his bday. 🙄

Seeing signals from girls who are into me.

My current girlfriend literally asked what was wrong with me and how I was so blind to it.

She showed me bikini pics to show me her tattoos, asked if I thought she was pretty, asked me out for a drink after work and I still didn’t get that she liked me.

How many of those are true for you? I got a score of 13, which isn’t great, but there are also a couple on the list that I used to be quite bad at but I got better with practice. So, yanno, don’t give up!

What was your score?