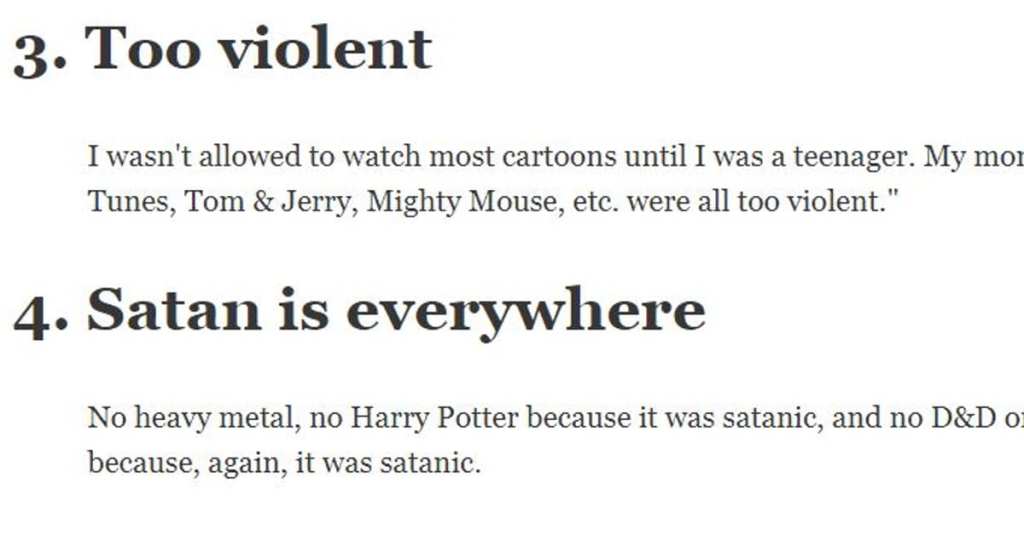 When we’re kids, we tend to accept what our parents tell us without question. We have no idea how strict certain rules may be until we start to get a little older. Then, all of the sudden, we learn that Tommy from across the gets to stay up ’til 10:30 and we flip out because how could our parents be so cruel as to make us go to bed at 9:00?

If strict curfews were your biggest worry growing up, then you had it good compared to these kids. Now that they’re all grown up, these kids with strict parents hopped on Reddit to reveal the most ridiculous rules they had to follow.

My dad wouldn’t let me use straws because he said they could cut through my tongue or cheek like a hole punch.

We were punished if my friends broke their own family rules. So Sally sneaks out or gets a tattoo without telling her mom, her mom tells my mom, and my mom grounds us.

I wasn’t allowed to watch most cartoons until I was a teenager. My mom thought Looney Tunes, Tom & Jerry, Mighty Mouse, etc. were all too violent.”

6. No talking at dinner

No talking at the dinner table other than the occasional “Do you want some (more) of ___?” Or “Please pass the ___.” We could not talk about anything at all. I make it a point now, with my kids, to chat up a storm each and every meal.

7. Even thinking of it counts

My husband wasn’t allowed to say “frigging” or “gosh” or “fudge” or “goodness” or “sugar” or even “oh, fiddlesticks!” because it meant he was thinking a swear word and “it’s the thought that counts.”

No drinking water from my bathroom. My bathroom genuinely had colder water and the best water in the house. I don’t know what she possibly thought I was doing, but I had to drink lukewarm peasant water like the rest of my family.

My mom didn’t allow the phrase “shut up.”

10. At least you got an extra hour

No saying “never” and “always” — because nothing is “never” or “always.” My parents saw these words as exaggeration. For example, if I said something like “Man, we always have chicken for dinner,” I would be reprimanded or grounded.

No texting or calling after 10 p.m. on school nights and midnight on weekends.

My friend’s parents had a rule that if they wanted too see a movie or get a game, they would have to read the book it was based on first.

I wasn’t allowed to cross the street until I was 13.