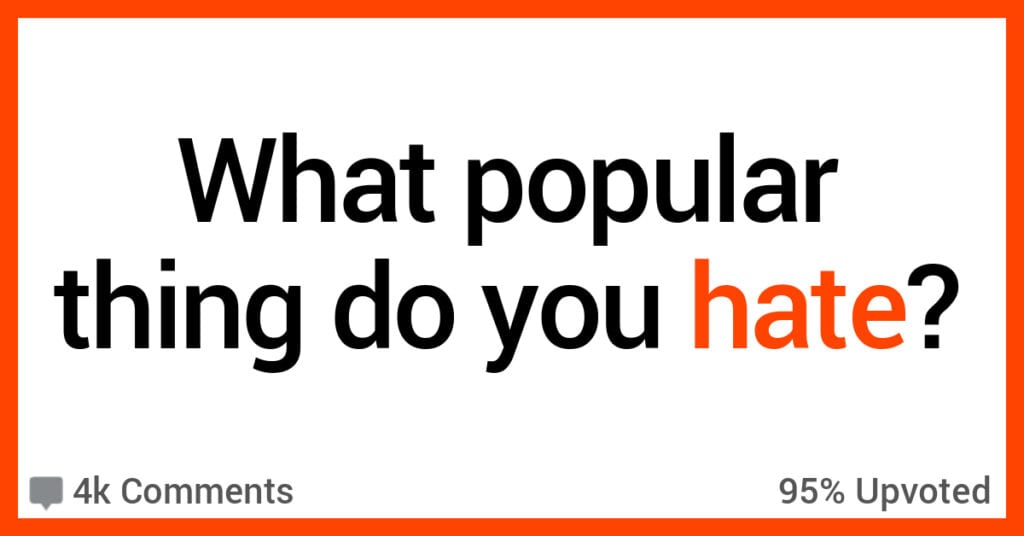 People Share the Things They Hate That Other People Love

Ready to talk about how much we all hate popular things?

What are things that everyone loves but you hate? from AskReddit

So, which thing bad, and not actually good? Let’s find out.

I have secondary embarrassment on behalf of the people who think they’re incredible but are awful.

I squirm in my seat and just flat can’t watch them.

3. The things you like aren’t ASMR, they’re white noise.

I hate most ASMR. The only ASMR that is actually soothing is pouring rain or a fireplace.

Other forms of ASMR are just people crunching or whispering which is creepy and not at all smooth like the consistency of pouring rain or a fireplace.

4. A bunch of characters.

Twitter is like a real life badly written cartoon villain who’s only evil just for the sake of being evil.

Driving a car. Not sitting in a car when someone else drives, but actually being behind the wheel.

I mean, I’m sure not everyone loves it but when we all started driving lessons when we were teens, I was the only one who couldn’t bring myself to actually finish those lessons to get my driver’s license.

Famous TikTok stars that got famous for dancing.

I don’t see anything wrong with it but what doesn’t sit right with me is that most popular creators are famous because of their appearance.

They see a pretty face and they’re just simpin like nothing. Where’s the same energy for people on the app that do so many unique and cool things?

7. They are extremely fake.

I don’t know if a lot of people love these, but those “real/live” ghost hunting shows.

They seem so fake to me.

I’ve been to several concerts, from my favorite bands, but don’t really like the sound of the live music, versus the studio version.

Couldn’t really get into it, and just stood or sat there waiting to leave, every time.

Plus, I hate crowds, so there’s that.

I don’t hate it, but traveling is just okay.

Fun and interesting, but also expensive and potentially stressful or a letdown.

I don’t think it’s a transcendental experience that changes you as a person.

Everyone should be exploring new cultures and ideas all the time, not just on vacation.

I don’t hate him, I hate the worship. Like yeah he is a cool guy but, I don’t understand the obsession for a celebrity that is humble.

The obsession for him reminds me of “professional mothers” spamming kid pics every hour on the hour.

When people say “this is the way I am”.

Why the f*** won’t you even try to be flexible with the situation?

Shortening words like “guacamole” to “guac,” and “cucumber” to “cuke.”

Are we that short on time? It’s petty and ridiculous, I know, but that’s the thing I hate that others find odd.

Balloons. What the f*ck is the point?

Telling me what to do.

I’d say the answer for me is brunch. You’ve got a free morning with no responsibilities and you want to get out of bed and drive somewhere to spend $50 on some eggs? No thanks.

What would your answer be?