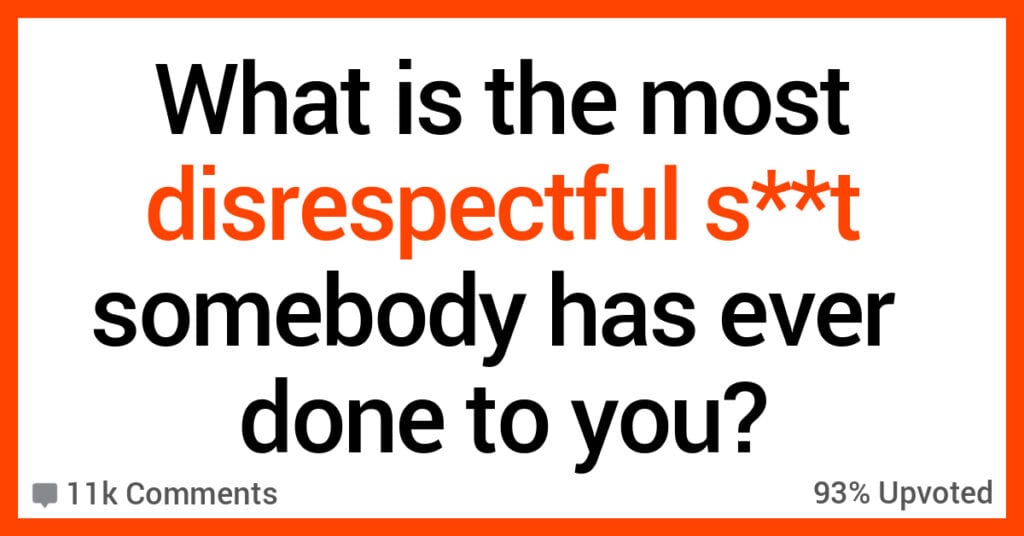 People Share the Times They Were Most Disrespected in Their Lives

R-E-S-P-E-C-T. Find out what it means to me! Spoiler: you won’t find it in any of these awful tales of workplace woe.

Reddit user MrSemiFunny got on r/AskReddit to pose this question:

What is the most disrespectful shit someone has done to you? from AskReddit

There were over 11,000 comments with people eager to vent the times they were stomped on the hardest.

One common theme was work stories, and boy were there some doozies.

Here are a few standout examples.

My first job as a photography intern, my boss posted on Facebook that he was going to fire me hours before he told me.

2. How much of a sociopath do you have to be to treat a person like a tissue?

When I worked a kiosk someone sneezed into their hand and wiped it on my back when they passed by.

when I was about 17, I was assembling a ride on train track (about 2 feet between rails) for an indoor amusement park when the owner of the company came in.

He decided to help me. I don’t know why, I didn’t ask for help and didn’t need help.

He helped me put a couple track segments together and decided that was enough work for him so he got up off the floor and wiped his greasy, dusty hands off on my jeans. With my leg in them. I was seriously incensed.

4. The customer is rarely right.

Was working at a Dairy Queen when I was 16. It was a hot summer day and a lady came in and dumped her melted blizzard upside down on my arm/hand.

In the process it covered my register, the wall and the floor.. She started yelling about how her ice cream melted and how I need to make her a new one.

She was served in the drive through….I was working the front counter inside. My coworker said she left over 20 minutes ago. I still had to make her a new one and give her a refund.

5. Good to know homophobia is still hard at work. </sarcasm>

I had someone I considered a close friend send an unprovoked email outing me to the entire staff of the place I worked.

Not only that, he took a screenshot of an online dating profile as proof and told them to keep their kids away from me. (I was a teaching professional at a country club.)

6. Some people just want to be mad.

Yesterday at my job (supermarket) I went outside with some guy to bring the handicap scooter back in. He immediately began to yell at me and curse at me about how hes handicapped and for not helping his wife unload their groceries.

I tried explaining to him that because of the current situation, we cant touch people’s groceries unless they specifically ask us. He wouldn’t even let me talk, kept interrupting and insulting me.

So I just stayed quiet and he eventually threatened to call his grandson to come kick my a**, then drove off with his wife who was also insulting me under her breath. Being an essential worker sucks…

7. The blatant disrespect is simply astounding.

Go to a meeting for work. Coworker says to opposing counsel “hey, do you want to meet GlutenbergBible?

He’s here” and gestures back at me standing in the hall with a bunch of files.

This motherf**ker looks me up and down, turns back to my coworker, and says “no.”

8. Did you know wage theft accounts for the majority of theft in the US?

Former boss owed me some back pay for a legit reason. My wife went into hospital for a month because of a complicated pregnancy, Baby was C section and then had to be NICU.

The day of the c section, boss said he wasn’t going to pay me anything.

9. This is some next-level Karen stuff right here.

I take my lunch break in my car. Always have for the last 10 years at my office. I park in a peaceful, quiet area overlooking a duck pond. I open the sun roof and get some fresh air and listen to the NPR lunchtime program with current/local events and it’s a really nice getaway from the monotony of office life.

Apparently, a coworker who historically has had beef with me started telling people I was “doing marijuana” on my lunch breaks and that’s why I never ate in the break room. She compiled a lengthy list of my behaviors that would mimic drug use. This list included things like being spaced out, being more talkative some days then others and often being tired (ya know, also signs of being an overworked adult). She also started keeping a folder of extremely petty “mistakes” I had made to prove I was high at work. These “mistakes” were such minor oversights, they affected no one at all.

She took this “proof” to not only our boss, but also to the physicians who own and run our office. She presented it as concern for my well being, but if she were truly concerned about me, wouldn’t she bring it up with me first? Luckily all my bosses knew my work is and was 100% at all times and didn’t think twice about it. I didn’t even know about any of this going down until she was fired a year later, for unrelated reasons.

Welp, joke’s on you Ashley, I’m the mf boss now and I actually DO “do marijuana” daily – but I wait until after hours because I take pride in my work.

10. It’s important to remember that big corporations do not care about you.

I worked at Dell in their sales department back in 1999. I was kicking a**. I was hired as a “part time” for an hourly wage with the promise of being hired as a ‘full time’ employee if I performed well. Full time meant commissions on sales, 401k, health insurance, etc.

I worked my a** off. 6am-7pm. I was number one in every sales category for months. Everyone hated me because I won all the prizes. (Like, who ever sells the most zip drives this week gets a $250 gift card…remember zip drives? lol)

Anyway, so after 3 or 4 months I started to ask about being moved into the regular employee team. I was making $14 an hour. If I was on commissions, I would have been making a solid $100k a year, maybe more. They kept telling me, “real soon,” “keep it up,” “I’m pushing for you…”

Anyway, so another few weeks ago by and a very high up comes in and asks to talk with me and my direct manager. I thought, “this is it, finally…”

So, they wanted to understand how my numbers were constantly so good. We had a conversation about my system– which basically relied on the volume of incoming calls. See, Dell trained their employees to spend time on each call, find out the customer’s needs, and try to upsell them on memory, or bigger hard drive, or adding a DVD (that was big then) etc. I found that most people had no f**king idea what they wanted or needed- the ones that did, I was happy to take the time working out their configuration, but for most, I took their order, maybe made a quick suggestion like, you should really go for a bigger hard drive, its only $45 more etc. So the bottom line was in the time the girl in the cube next to me sold one computer for $1200, I took 5 calls and rolled out 5 computers maybe $800-$1000 each. Volume.

They ask me to train a new team. So I did. Their first week on the floor my 8 guys were the top 8 sales people in the building. I show up Monday, Dell fired EVERYONE who was full time. They basically had me train all our replacements. The people I hired were all brought in as “temps” for $9 an hour. They never had ANY intention of hiring me they just used me to teach the temps. That day I was like, “so am I a full time now?” They said no, so I quit.

11. What do you even say to something like this?

Working in optometry and I was the most experienced person in the store by far. One time I spent 30 mins choosing the right frames for a customer, she had a difficult perception so it took some time to find something that suited her needs.

This customer seemed disconnected to what I was saying, then she finally said “I’d rather a girl help me, they are better at fashion then men”

working as a barista in Starbucks, I got a fresh, hot caramel macchiato thrown on me because there “wasn’t enough caramel on top”

when I started my last job I went in for orientation and to fill out my employment paperwork, and the head of HR told me that her daughter and I shared a name – well actually a nickname. Because though she and her husband loved my name as a nickname they wanted their daughter to have a more ‘professional’ sounding legal name.

She didn’t even seem to realize that she’d said anything I might find offensive.

14. Just because the job is prestigious doesn’t mean the people aren’t awful.

Opposing counsel in a case that we were doing pro bono once said to me, “Know your place.” He never said this to either of the men on our team. In any case, my place was to oppose him, so…

For additional flavor, this guy was easily the most obnoxious person I’ve ever met, in or out of court, and he had a history of exposing himself to minors. Not the typical caliber of opposing counsel I’m used to dealing with.

I’ve also been told by a partner at my prior firm, “For what it’s worth, I think of you as white.” Well, that’s worth nothing to me, but the fact that he thought it was a compliment was deeply unsettling.

Some random guy spat at me and called me a f**king ch*nk. I had just emerged from a courthouse in Brooklyn. If you can’t handle racial diversity, what the f**k are you doing in Brooklyn? And maybe yelling racist s**t at federal employees who have access to U.S. Marshals is not the best idea? Not that there’s any logic to this behavior, obviously.

Did I mention my law school registrar once told me graduates of my alma mater did not face racism? Apparently she felt that our school was so good that somehow race became a non-issue. Like I’m just walking around with a neon sign that tells people not to be racist because of my fancy degree, and the racists are just like, “Oh, ok.”

15. We’ve saved the most harrowing story for last…

I was happily eating a burger on my lunch break alone. I work in customer service so being able to not talk to anyone is sacred.

Some dude tried to come up to me and start playing his favorite Justin Bieber songs on his phone to me and talking about how much he is a fan.

I’m still shuddering from that last one. Approaching anyone on their lunch break should be considered a felony. Proceeding to play annoying music? From a PHONE SPEAKER? That’s essentially a war crime.

What’s the time you were most disrespected at work?