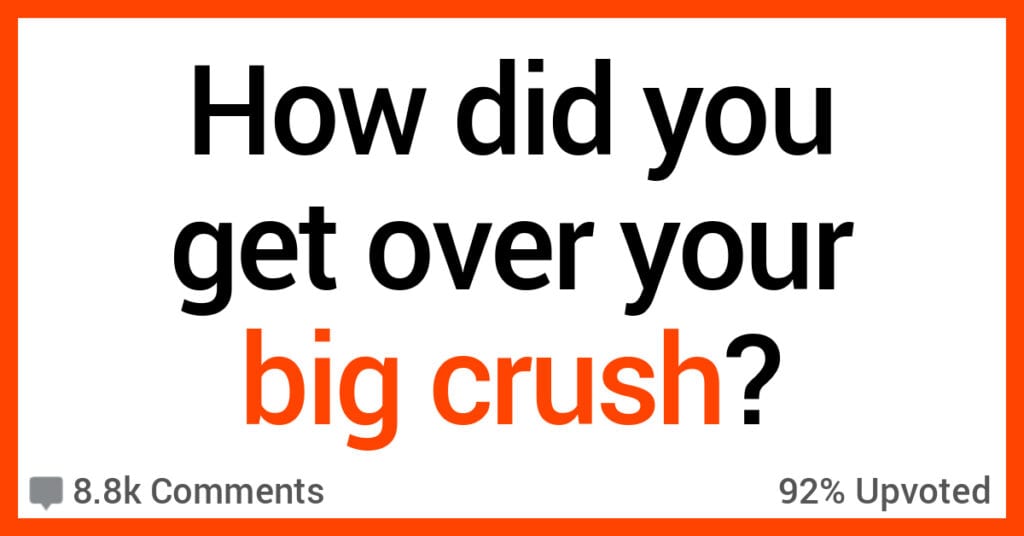 I’m not sure why the word for liking somebody a lot is “crush,” but if I had to guess, it’s because going through it just ABSOLUTELY CRUSHES YOUR SOUL.

So how do you shake a crush that’s crushing you to no benefit?

What helped you get over a crush you had for years? from AskReddit

Let us sit at the feet of Reddit and gather its wisdom.

Well, for me, I kept telling myself that I did not fall in love with her, but with the idea of her.

I had always imagined a future with her… I wouldn’t bore you with the details, but yeah in those imaginations she seemed to be so excited about my presence, I mean she was in real life too (she’s a pretty good friend of mine), but in those dreams, a little more, I guess?

But anyway the fabricated and real girl were almost pole opposites in nature. So I kept telling myself for three years that the girl I actually had a crush on never existed. I liked the girl in my imagination, and there, she liked me back too; it wasn’t the case with the real one.

So that’s what helped me move on from her.

She’s still my friend, maybe we’re not as close as we were before, maybe it’s for the best. I still sometimes get slight feelings for her, but I’m sure it will wear out with time.

The fact that I just stopped initiating the conversation and that was the last time we talked.

A lot of time.

A lot of crying and a lot of time spent on my own.

It’s so much better when the feelings are mutual.

The realization that I would probably feel lonely in a relationship with him.

He tried to stab his mom.

That was kind of a deal breaker.

Realizing she had a lack of ambition with her life, and that I was a lot more invested into maintaining the relationship than she was.

Something I always try to remember going forward is that you have to separate what the relationship used to be/what it could be vs. what it actually is.

Some things you just can’t change or work out.

I should have known it wasn’t going to turn out well when we started making out while her boyfriend was in the bathroom.

An obvious red flag now, but just the coolest, most slow motion movie scene at the time.

Crushes can make you stupid.

My feelings didn’t change when she was interested in other guys…until she actively tried to date a married guy.

COMPLETE 180 for me on that one in mere seconds. 2 year-long mega crush gone.

Turns out, he is not my type AT ALL. I only liked the idea of him.

The mystery of not knowing him was what made him attractive.

Coming in way too late, but here goes.

When I finally told her how I felt and was rejected, I asked her if she ever thought about the possibility of us together. She said “No.” It was as if I could feel my brain rewiring right there in the moment, because I realized I wasted so many years pining over someone who never once considered me in the same way.

Who knows what opportunities I missed because I was so fixated on her? Thankfully I got out of my head in my early 20’s before it impeded anymore growth on my part.

Our interests were too similar.

I liked girls, so did she.

Have you ever shaken a big crush? How did you pull it off?