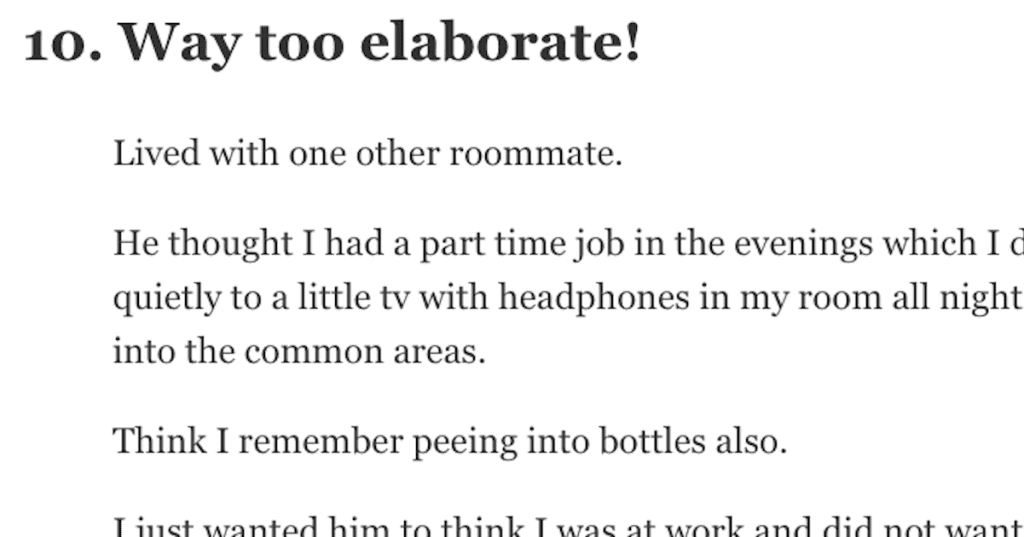 Have you ever not wanted to talk to anybody ever? Well, at least for a day or two.

If you’re a human being, the answer is inevitably “Why yes, I have felt that way!” But did you know that there are people who kind of feel that way almost every single hour of the day?

Enter reddit, where people can share their secret shame anonymously so we all get to read it and think, “Wow, glad that’s not me!”

In the latest and saddest Ask Reddit topic in a long time, one user asked, “What is one of the saddest things you’ve done to avoid socializing (such as hiding in the bathroom)?”

And yeah, wow, glad that’s not me.

1. Such a detailed plan!

I used to cross the crosswalk, go straight past a couple of small restaurants, then take a left to get to campus, but I always ended up crossing paths with my friends, so now I cross the crosswalk and weave through the back alleys of the restaurants so I don’t have to talk to them on my way to school.

Pretend to answer a phone call when approaching someone.

When I heard people come over, I’d take a shower, get dressed like I was going somewhere, get in my car, drive to go get food somewhere, then sit in the parking lot eating my food and listening to music for a few hours.

They actually used to complain I was always too busy to hang out with them.

4. Nothing wrong with avoiding drama…unless you have to eat!

I lived with a bunch of super emotional, super talkative people once.

I enjoyed their company, some of the time. However, when things got awkward, I’d hide in my room, lock the door, and just not eat or drink until I absolutely had to so I wouldn’t have to see them.

They could be quite catty.

I used to be able to make myself puke simply by eating too much cheese.

So if I didn’t want to go somewhere, I would eat a lot of cheese and have to cancel the plans.

Going to the grocery store and seeing how full the parking lot and just turning around and going back home.

I just flat out walked out of high school mid-day.

I had no plan, just wandering for 3 hours panicking over what was going to happen.

But I’d had enough.

8. To be fair, does anybody want to interact with a delivery driver?

Ask the pizza delivery boy to leave the pizza outside.

And then I paid for it under the door.

Peeing in a bottle in my bedroom.

That way I wouldn’t have to walk by the people in my living room to get to the bathroom.

I am a genius.

Lived with one other roommate.

He thought I had a part time job in the evenings which I didn’t. I used to listen quietly to a little tv with headphones in my room all night. Did not venture into the common areas.

I just wanted him to think I was at work and did not want to socialize in any way with him.

Once he went to bed I came out of my room quietly. Went to the front door made noise and pretended to ‘come home’.

11. Panic attacks are no joke.

Couple of weeks ago, had a compete and utter panic attack in a church.

Found an unoccupied room, locked the door, turned the lights out, and sat on the floor in a ball wedged between a couch and F*ke tree until I could calm down a bit and do grounding exercises.

Sometimes I panic and drive 6 hours to another state.

I always look for animals at networking events that I can socialize with instead of with people.

I look for parents with babies and ask to hold them.

I’m a babysitter of 6 years and nanny of 18 months and holding a baby is honestly the best excuse to just hang out quietly in a dark corner.

If they fall asleep you can just sit down and hold them and if anyone tries to talk to you, you can just tell them to be quiet so they don’t wake up the baby!

15. How to avoid talking in the South…

Learned just enough sign language that if anybody tried to talk to me i could just sign some random words/phrases and they’d leave me alone.

I then became terrified of running into someone who actuAlly knew ASL and them calling my bluff.

To be clear at no point did i ever claim to be deaf or mute, I live in the south were strangers are way to friendly and will talk to anyone no matter how uncomfortable they are and wanted a way out

many years ago my childhood best friend and I had a huge falling out. She had been living with me and I asked her to leave.

The day she came to get her things, I couldn’t stand to face her, so I hid in the back closet while she and another of her friends gathered her things.

Think I was in there about half and hour, waiting until I couldn’t hear them anymore.

I will literally physically go out of my way not to talk to people that i know will try to start a conversation with me. Some examples…

Whenever I’m about to leave work at the same time the guy next to me is, ill just sit there pretending to work on something until he is gone so we dont walk out together.

If i see someone just far enough behind me to miss the elevator if i call it and spam the close door button, ill start fast-walking as soon as i tur nthe corner to the elevator and do just that. If there’s not enough distance between us, ill walk the 3 flights of stairs instead. Quickly.

If im going down the stairs to leave and hear the door on the floor below me open (someone else leaving), ill stop on the stairs and let them get down a flight so we dont have to say hello in the stairwell.

If i see the car of the receptionist who likes to talk to me in the parking lot, ill walk around the building and enter through the facility’s side door instead of passing by her desk in the main lobby.

If someone is already at the printer that i need to use, i will pass by and act like im on the way to a meeting until i hear their print job stop. Then I’ll turn around and print (instead of the BS small talk at the printer. Hur dur, how many trees you killing? Hur dur).

Hard to believe i have ANY friends, isn’t it?

I’m officially shook at what lengths people will go to avoid contact with the people who live with them.

I wonder if any of my former roommates ever did this to me!?