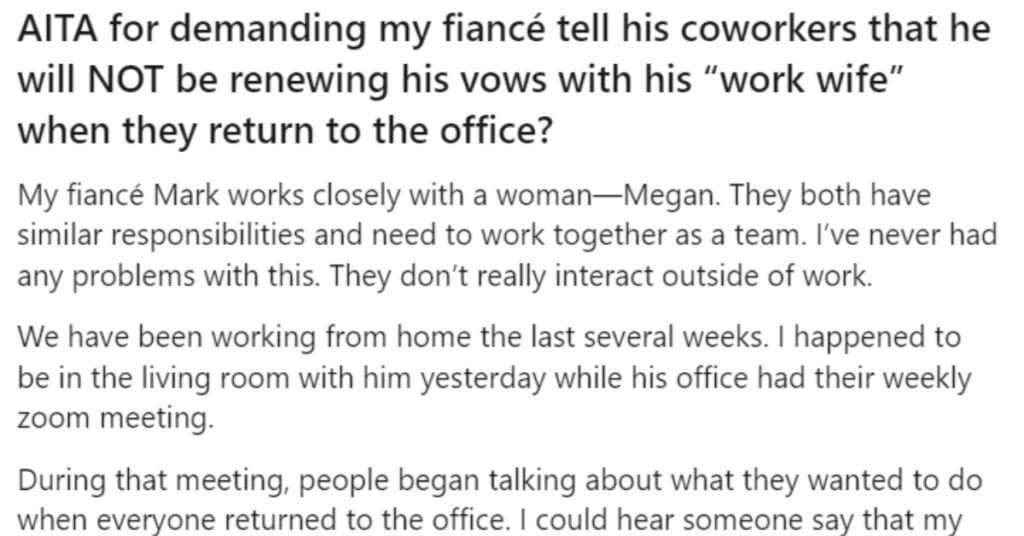 Ever heard the term “work wife” or “work husband” before? Here’s how Wikipedia defines it:

“Work spouse” is a phrase, mostly in American English, referring to a co-worker, usually of the opposite sex, with whom one shares a special relationship, having bonds similar to those of a marriage.

Urban Dictionary adds a little spice with this prediction:

You will eventually develop a huge crush on her, but will think you’ve kept it hidden. You haven’t -everyone at work will think it’s obvious.

So, depending on a few variables, including, I guess, how bored you are, a work spouse might be a serious emotional conflict or a jokey way to describe someone you get along with on the job. It’s not an issue that often causes much controversy, except for the time someone took to Reddit with the this predicament:

AITA for demanding my fiancé tell his coworkers that he will NOT be renewing his vows with his “work wife” when they return to the office? from AmItheAsshole

The thread was posted on r/AmITheAssHole, a place where people come together to pass judgement on who is and is not the asshole in a given story. Often times, these threads are pretty one-sided, but this time, the takes were a little more varied.

1. Many were firmly in the “ESH (Everyone Sucks Here)” camp. 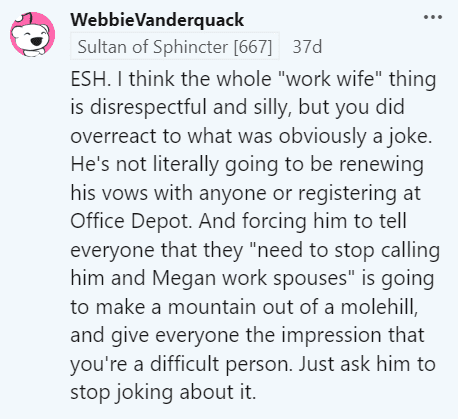 2. But many didn’t like OP, for a variety of reasons, telling her “YTA (You’re the Asshole).” 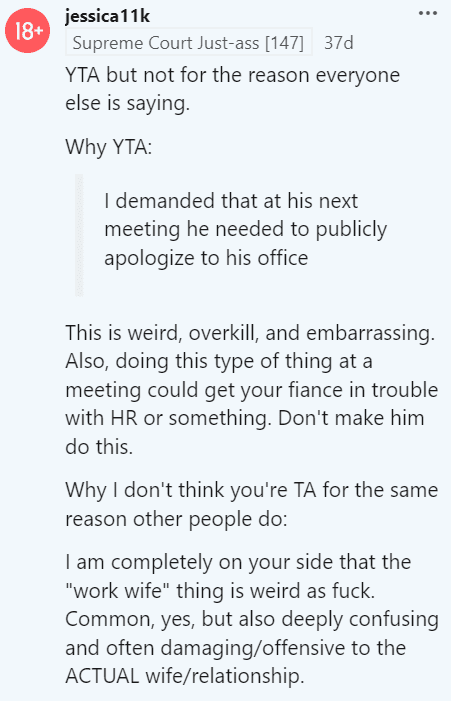 3. The entire situation does reek of cringe. 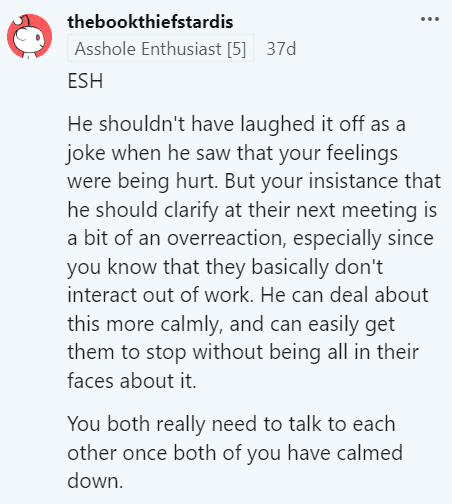 4. Most people just didn’t appreciate the drama of it all. 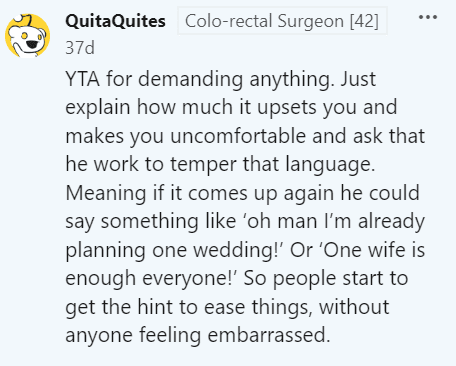 5. Is it possible that this is going to cause more problems than is solves? 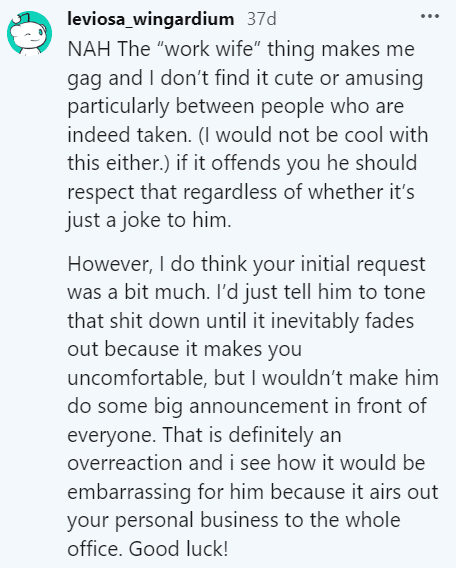 7. Maybe the “work wife” term should be retired.

8. For some, it really is not at all trivial. 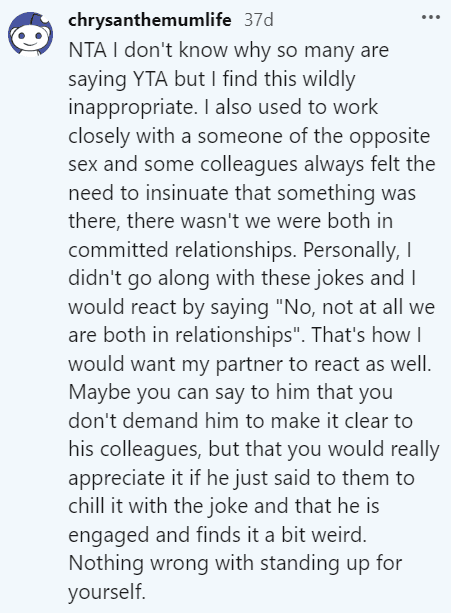 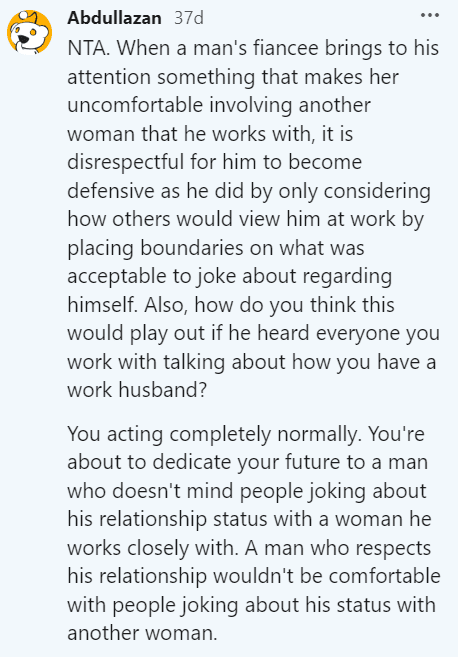 10. But is there something beneath the surface here? 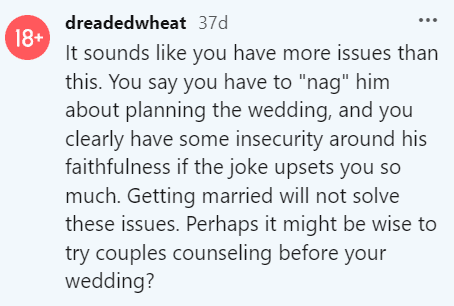 11. Marriage is a big step…you should be sure you’re ready. 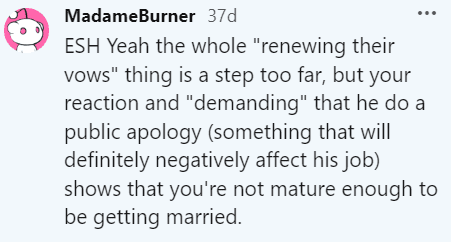 12. Something about all of this just feels sort of…childish. 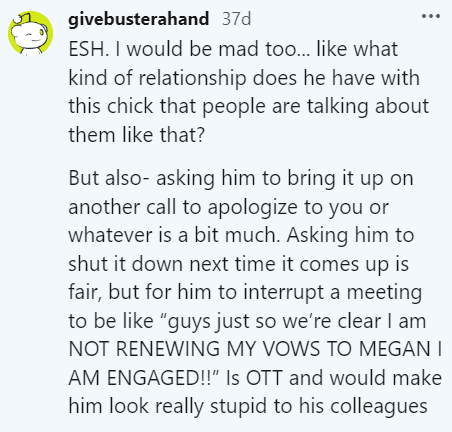 13. The comments section really could not come to a consensus. 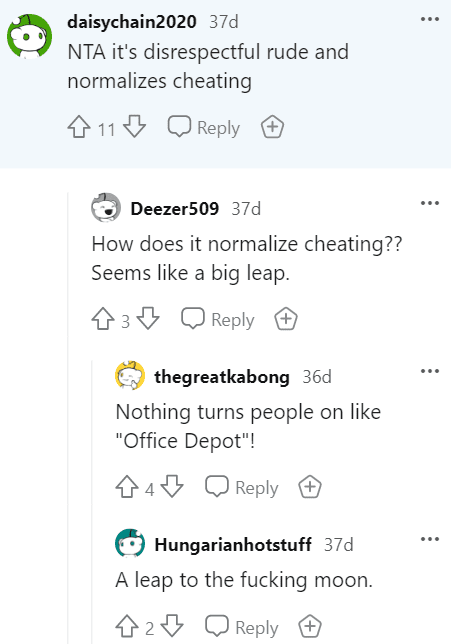 14. But if OP was looking for support, she certainly did get some.

15. If any kind of agreement was reached, it was along the lines of “everybody chill.”

What’s acceptable and not acceptable varies from relationship to relationship; it’s important to keep an open and honest line of communication with your partner. And if that fails, ask Reddit what to do, I guess?

What are your thoughts on this whole situation? Who’s in the wrong?