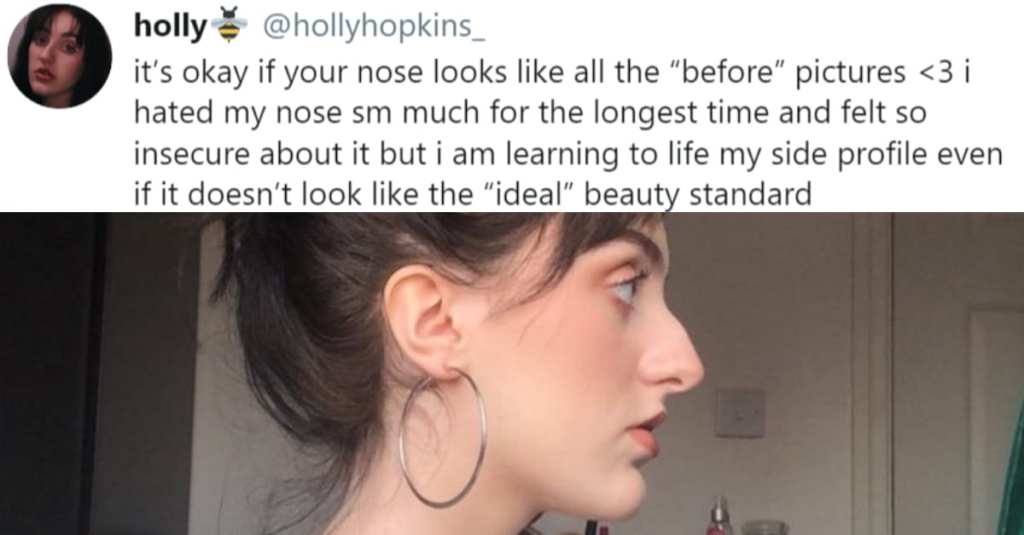 They say that beauty is in the eye of the beholder. But beauty is all over the place, really. In a good sense and a not so good sense. On the negative side, beauty STANDARDS are all over the place, and what we’re expected to conform our appearance to varies all the time. Self-imposed, often near impossible strictures find their way into our psyches and make us feel lesser. On the other hand, beauty is all over the place. As in, it’s really all around us. And if we can step away for a moment from the mindset that says it only exists within a few prescribed boxes, we can find a better world to live in.

That’s the kind of message that hit the hearts of so many when twitter user @hollyhopkins_ made this statement about her “before” nose.

it’s okay if your nose looks like all the “before” pictures <3 i hated my nose sm much for the longest time and felt so insecure about it but i am learning to life my side profile even if it doesn’t look like the “ideal” beauty standard pic.twitter.com/3GFcIBCGxk

Despite a moderate following on Holly’s account the tweet quickly gained traction with over 15 thousand retweets and 3 thousand comments, most of which were others who’d felt insecure about their looks, standing in solidarity.

I see what you did there with the knows thing. Well done.

anyone who knows (haha) me, knows i’ve always been deeply self conscious about my nose and have been teased about it since i was a kid. i’m learning to accept it more and more; fuck the eurocentric beauty standard. unique noses are cool too pic.twitter.com/cAfoAO4MHb

Dude I’ve never looked that good during a hangover.

I’m laying in bed hungover af but I wanted to join this beautiful thread too! pic.twitter.com/IO76LHN2NC

She does look pretty happy about it.

The nose of Hatshepsut, a female pharaoh. You’re in good company. ??? pic.twitter.com/HCmTHBL02Y

(Rhinoplasty = cosmetic surgery for your nose, if anyone was wondering.)

I was really uncomfortable with my side profile for the longest time & considered rhinoplasty but I’m so glad I never went through with it! pic.twitter.com/1a0K6bZBfm

I love how the bird is into it too.

i used to hate my nose but now i think she’s kinda cute ✨ pic.twitter.com/fWcfe6BRbz

9. All over the world

This tweet taught me an interesting fact that also made me sad.

Irani Jew here. Iran is the number one country when it comes to nose job cases. It’s part of our culture at this point. I grew wanting a nose job my entire life. Now I make my living as a an online sex worker. Folks pay to look at this beautiful nose! ? pic.twitter.com/5dTYRsAaNc

Look at that smile.

i am living for this thread!! i used to hate my nose so much but now i would never change it ? big nosed gals rise up! pic.twitter.com/ApiZ1PBduC

I think you both look wonderful.

yes yes THIS THANK YOU. i’ve always struggled to accept my nose, but after getting our wedding pics back i finally decided she kinda cute. pic.twitter.com/4dOEFFA9Ex

Learning to love yourself is a big part of growing.

My nose has been my biggest insecurity throughout my life. But now I’m starting to love it as well ❤️ pic.twitter.com/zDFuZj2wmd

4. Still working on it

It doesn’t happen over night.

you’re all so pretty n i want to join in too ? hate my nose, haven’t felt comfortable even glimpsing at myself from the side in years (this is the closes I’ll get) , one day I want to change that pic.twitter.com/VAyw3Lt3b3

3. Look at this photograph

I love the fashion you’re rockin’ in the second picture as well.

I had a hard time loving my nose for the longest time, but I see these photos and I think it’s beautiful. pic.twitter.com/skY8QGqgdv

there are some truly beautiful noses in this thread and I love each and every one of them! I figured I might as well add my own

I hated mine growing up while the trend was petite button noses (and there’s nothing wrong with them either!)

That doggo is CLEARLY here for you and so are we.

I still struggle to accept my nose but I’m getting there! ? pic.twitter.com/pl4cAslneC

What’s the moral of the story? No one knows what nose you’re suppose to grows because no nose knows yo nose but those you chose to know. Which is my attempt at a clever way of saying, you’re perfect the way you are. And anybody who can’t see that don’t nose nothin’. 🙂

What’s the thing you’re most insecure about? Are you learning to embrace it?