Somewhere around 3/4 of the population of the United States identifies as some category of Christian. It’s such a cultural norm that generally, no one bats an eye at each others’ professions of faith.

But every once in a while, someone comes along who is so intensely and bizarrely devout that everyone, believer and otherwise, turns to them and goes “…what?”

That’s the case in this incredible letter passed graciously to the internet by twitter user @isaactweeting. He says:

One of my best and oldest friends broke up with his high school girlfriend over a decade ago. Today, his wife of 7 years found this absolute ornament in their mailbox.

Just…stop what you're doing and read…🤯🤯🤯 pic.twitter.com/QnvDUkROu4

Attached to the tweet are photos of a two page letter with names and addresses redacted for privacy. The subject of the letter? “Demand For Restitution For Stealing My Daughter’s Honor.”

What can we say but yikes.

On the first page, the father in question explains that he’s still very, very upset at this guy for having had sex with his daughter while they were dating 10 years ago. “Since you have not raised a daughter,” he writes, “you cannot imagine the emotions and feelings I have endured without relief since then.” So, he’s apparently been obsessing over his daughter’s sex life for the last decade. Yanno. Like ya do. 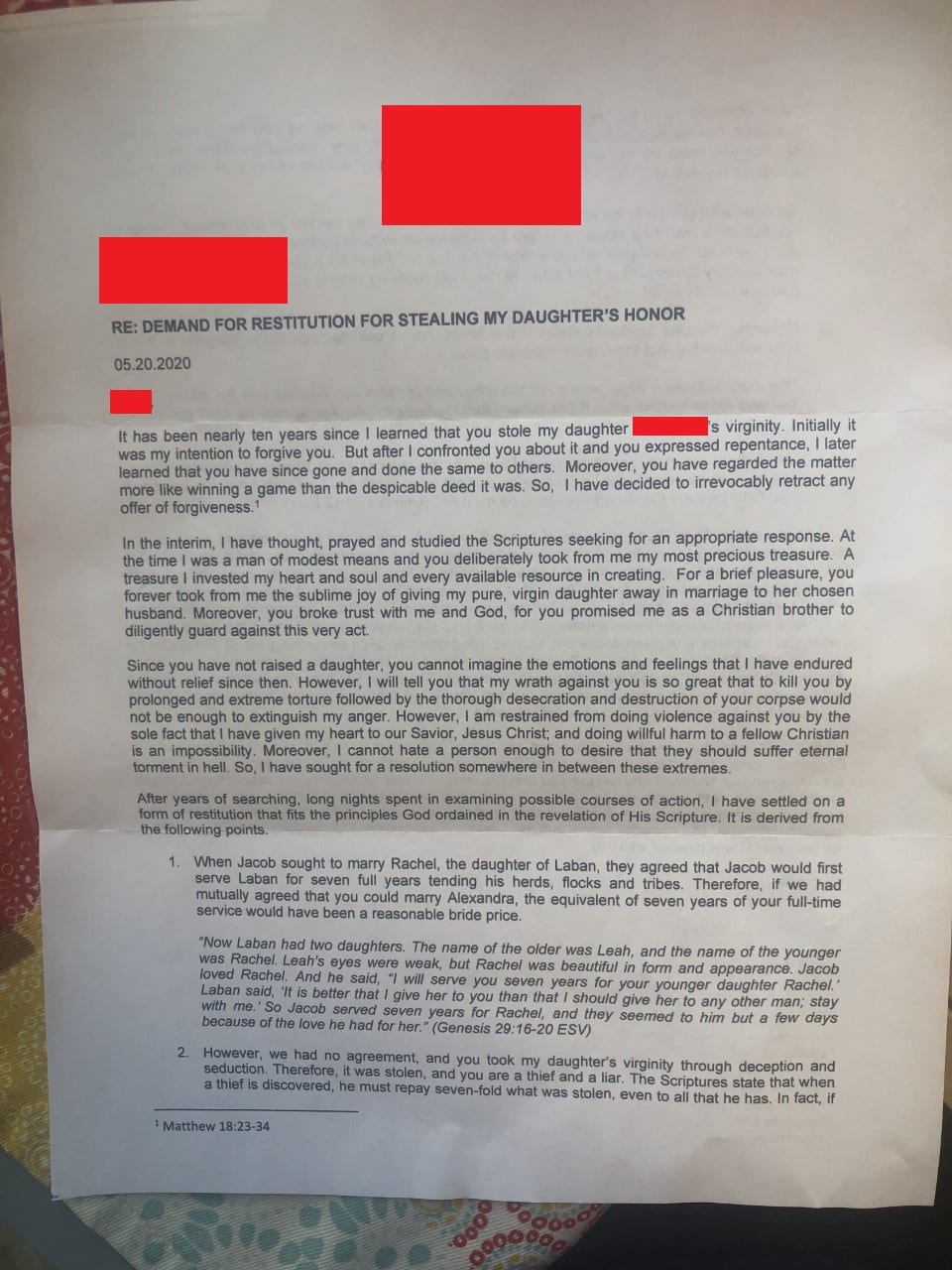 Now that he’s laid out in very formal language how much he would like to torture someone to death for doing the sex, this definitely-not-a-psychopath-asshole dad lays out how he plans to deal with the situation. Whatever you’re thinking he’s about to say, I promise you you’re wrong. You will never see this twist coming. 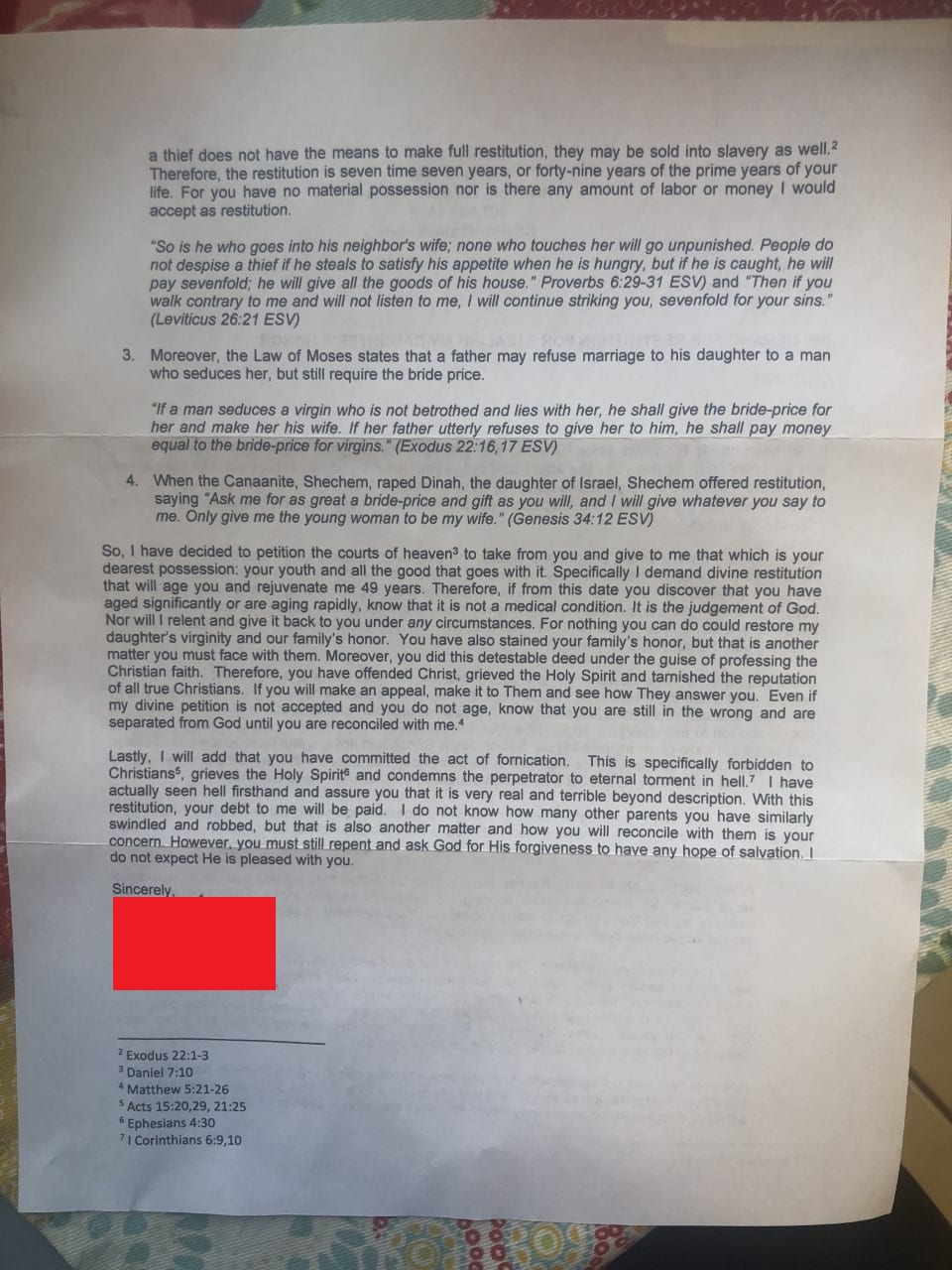 So, his plan is to zap the guy of his youth. Amazing.

But what about the poor daughter in this situation? Well, she did have one important thing to say:

So…the internet did it’s thing and the ex gf has demanded I set the record straight: she, in fact, broke up with him 🤷‍♂️

Apparently she’s about as done as she can be with all this.

She lives in a different country now, if that tells you anything

Watch out Isaac, he’ll turn you into an old. Don’t test him! He’ll do it!

Ol Dad deleted me on Facebook. I am devastated pic.twitter.com/tvWp1v8kRe

By all accounts, the letter is real, and the man behind it, unstable as he may be, doesn’t deserve much sympathy.

100%. This guy was unhinged and abusive when I knew him. I’m both shocked and completely unsurprised.

There are so few words with which you can properly respond to a thing this absurd, but @sci_phi did pretty well:

Gotta be honest, I grew up devoutly Christian and I do not remember magic ageing spells in the Bible. He must have the extended cut or something.

In my years of seminary we never got to the youth stealing part of the Bible. Very upset

For all this guy’s intensive Bible study, he seems to have missed a spot:

“He who uses scripture as justification to seek compensation has taken the lord’s name in vain.

He has blasphemed beyond all others.

Whatever he has sought to gain through exploiting the lord, he must instead pay to the other party.”

The tradition of fathers being weirdly possessive of their daughter’s sexuality is a creepy relic that needs to go away. This is a particularly insane instance of it, but there are more banal examples all over the place that constitute a trend in thinking. It’s gross, it’s weird, it’s backward, and it makes me feel like I need to go wash my brain out with soap.

What do you think of all this?