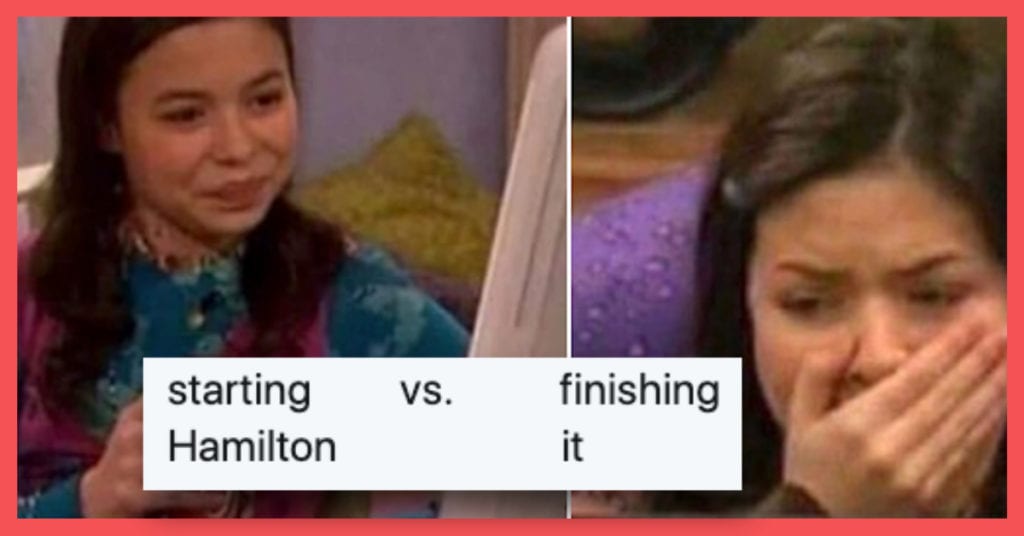 10 Reactions From People Watching “Hamilton” for the First Time

You can only experience a phenomenon for the first time once. That means you have to soak it all in, give yourself permission to freak out and obsess, and yeah, realize that you’re going to have a lot to talk about for awhile.

Luckily, there aren’t many people who haven’t seen Hamilton now that it’s available on Disney+, so people like these 10 – who have a lot of feelings right now – have plenty of folks willing to squeal with them all over again.

Watching Hamilton, and begging Alexander Hamilton to be a good husband to Eliza even (1) single time.

9. This is super accurate.

But also it totally worked somehow?

All of the founding fathers are problematic. That doesn’t mean they also didn’t do great things.

anyway if you watched hamilton and see the man literally cheat on his wife, fail his allies, send his own son to his death, have an emotional affair w his sister in law, be a dick to everyone around him and think it glorifies the founding fathers, not sure what to tell you

7. You think you know how you’re supposed to feel and then…

Or they could just be shocked and awed and the spinning stage and backward choreo.

6. When you realize you need an entire musical about the Schuyler sisters.

5. Somehow, we can all relate.

And yeah, we’re all still jamming out to the soundtrack.

LET ME TELL YOU SOMETHING I WISH I’D KNOWN WHEN I WAS YOUNG AND DREAMED OF GLORY YOU HAVE NO CONTROL WHO LIVES, WHO DIES, WHO TELLS YOUR STORY#Hamilton #HamiltonFilm pic.twitter.com/tjTGGglbrM

4. He must have been getting his popcorn at the beginning.

Or during his American History class in high school.

just watched @HamiltonMusical with my dad and burr shoots hamilton and he goes “wow i didn’t expect that” ???? sorry what ??? @Lin_Manuel @leslieodomjr

2. The Reynold’s Pamphlet will forever be a d%ck move.

You can root for them and also think this, I promise.

Eliza Hamilton was pregnant with her sixth child when her husband published the Reynolds Pamphlet, let THat sink in

He definitely didn’t deserve her.

#Hamilton
Eliza: “Look at where you are, look at where you started, the fact that you’re alive is a miracle; just stay alive that would be enough.”
ME: pic.twitter.com/HGh6Nmrxyu

I am someone who didn’t get to see it until recently, and I couldn’t love it more.

What was your first reaction to seeing Hamilton? Tell us in the comments!