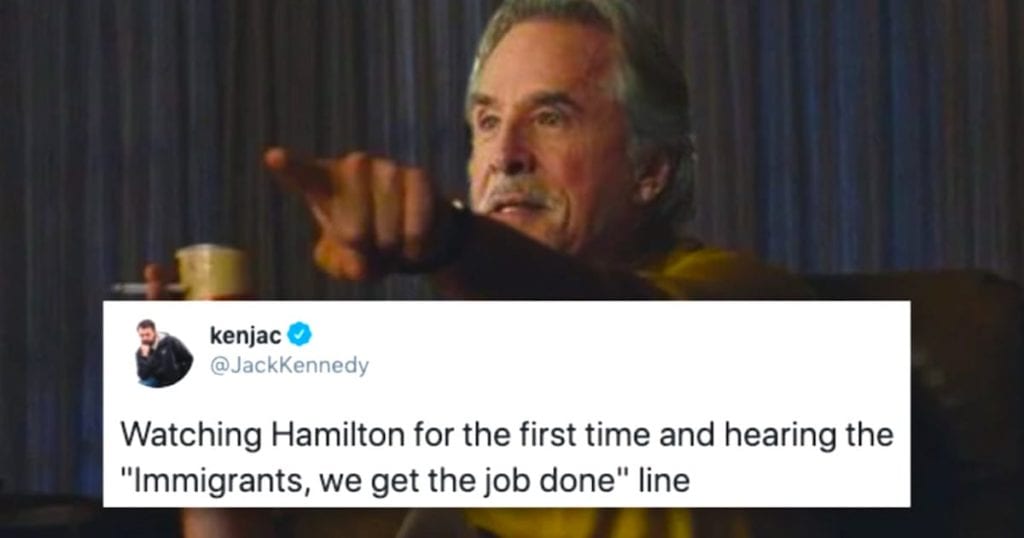 11 Great Tweets From People Seeing ‘Hamilton’ for the First Time

I am one of those people who hadn’t had a chance to see Hamilton before it came to Disney+. I knew what it was about and I’d heard some of the songs (I honestly don’t know how big of a rock you’d have to have been living under to not), but seeing it in person had eluded me.

Because there’s not a dry eye in the house.

10. There’s no preparing for which bit you’ll be humming on any given day.

But it will be a Hamilton lyric.

The Hamilton lyric "your perfume smells like your daddy's got money" is the one stuck in my head today. I fear that like many of my thoughts tweeting it is the only way to excise it.

I feel like a lazy pos every time I think about it, you?

8. They were done with your crap the first time you opened your mouth.

Especially Angelica, look at that face.

The Schuyler Sisters want to say that they're done with your crap #Hamilton pic.twitter.com/XaTzPnFwv2

7. Most of the time the whole dueling thing seems terrible.

Watching #Hamilton with my daughter and she turns to me. “Someone should challenge Mike Pence to a duel.” pic.twitter.com/wvV1bC6A6l

6. This is an accurate representation.

But also he deserves to congratulate himself there.

Alexander when he’s chosen for the Constitutional Convention #Hamilton pic.twitter.com/WwyLBMtvVR

5. Exactly what happened at our house.

Me while watching #Hamilton : It’s definitely good but I don’t see why everyone was so obsessed…

Me as soon as it ends with the album on repeat: pic.twitter.com/07sqHNZ85d

4. Yeah this musical giveth, so it must taketh away.

– Kanye after watching Hamilton for the 12th time

3. I am in this tweet but didn’t approve it.

Burr: How does a bastard, orphan, son of a whore…
Me:#Hamilton pic.twitter.com/yE4wFYPf0W

2. It’s a moment worth waiting for.

And a moment that should make everyone cheer.

Watching Hamilton for the first time and hearing the "Immigrants, we get the job done" line pic.twitter.com/3ifnjHEPPw

1. We’ve all been the “and Peggy” at some point in our lives.

Just one more reason to relate.

Not a single person:

I’m a history buff/nerd, so I knew I would love Hamilton, but I wasn’t prepared for how much!

What were your thoughts after seeing it for the first time? Tell us in the comments!