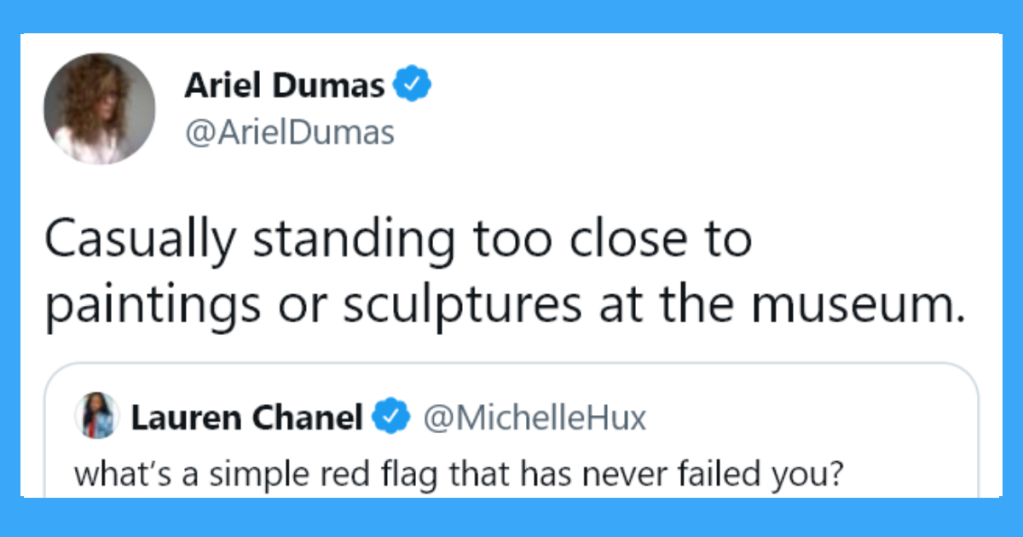 13 Red Flags That Will Never Fail You

So, guess what time it is? Yep… time to spot some red flags!

Lauren Chanel took to Twitter to bring up an interesting question:

what’s a simple red flag that has never failed you? something small like a person quoting 48 laws of power.

She makes reference to the 48 laws of power, a weird little book beloved largely by people who maybe take their own domination and manipulation of the world around them a touch too far. Thus, likely a red flag.

But there are plenty more where that came from, aren’t there, Twitter?

Oh so you wanted to come out and have a nice time but you can’t spare a tiny bit extra?

For real, cults do this stuff.

Being “love-bombed”. You shouldn’t want to spend your every waking moment wanting to talk to me or be around me.

It’s a form of control, so whether friend or romantic relationship, this has never failed to foretell problems. https://t.co/Pm82o2BTDS

There is something inherently dehumanizing about it.

Any man who uses ‘female’ when talking about women. As a Francophone, this is a no brainer because female is only used for female animals in French. https://t.co/vdxwPKMGGy

Don’t be the litter bug – that’s the worst kind of bug.

Littering-so, you think someone should clean up after you or you just don’t give a fuck about the environment?

9. Bringing it back to me

It demonstrates often that you can’t think of people outside of yourself.

Someone who always has to relate to what you’ve said with an anecdote about themselves. Like, I believed you could understand what I was trying to say, but then you brushed me off and emphasized your own experience about it, so now I think you’re a narcissist

That almost makes me suspicious of me.

when someone says they don’t usually find women interesting/attractive/smart/funny/whatever, but they think *I’M* great. No need to devalue others to tell me you like me! And if you don’t like most women or most other people, I probably won’t like you???

That’s all of us, Greg, calm down.

“Taxpayers.” Anyone who refers to the rights of taxpayers is probably ignoring the rights of a whole lot of human beings. Humans are more than the money they pay into their government.

You’re thinking of doin’ it aren’t ya?

Casually standing too close to paintings or sculptures at the museum. https://t.co/TEmJdNppRp

Maybe the problem is actually you?

Took me an embarrassingly long time ti learn that if someone is always the victim in the stories of their life, they are going to be a really difficult partner https://t.co/74WGrixUXj

Let’s keep this all about me, please.

not asking me any questions on a date https://t.co/O0u11sGYB0

Who is John Galt?
Who the heck cares.

From a creative point of view: a dude who can't/won't list a woman (and preferably more than one) as a significant creative influence and/or as a creative peer. Equally flag-worthy: when the one woman they consider an influence is Ayn Rand. https://t.co/BZxdnXzeyZ

If you take the time to curate and broadcast every waking instant of your life, there might be something going on there.

It’s a neat way to toss out your completely uncaring opinion without revealing it as your own.

Imma stop you right there https://t.co/fU228KiMOT

Man, I am definitely seeing red.

What are some others we’ve missed here?