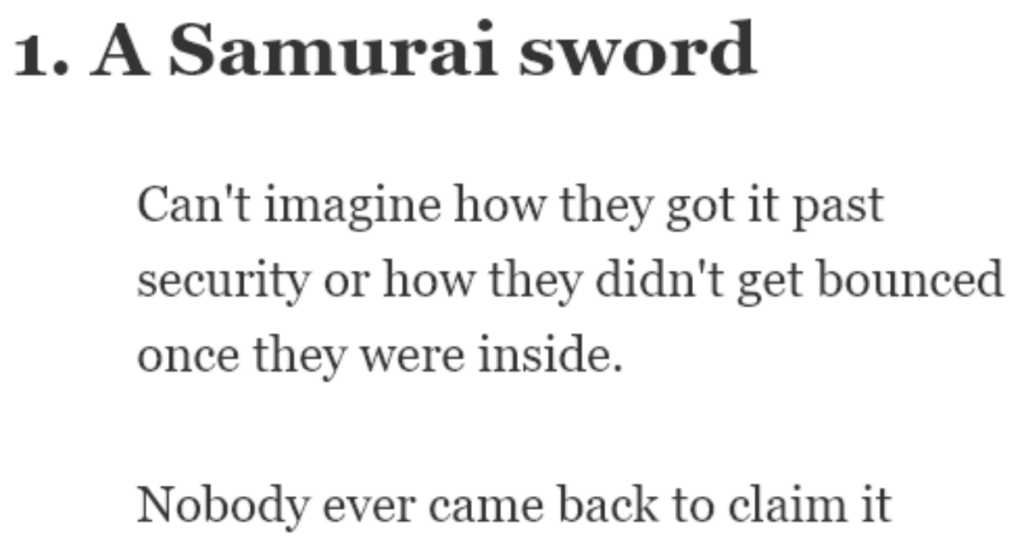 Hey – clean up after yourself.

It’s really not that hard of a concept.

Or at least, it shouldn’t be.

But for people who go to concerts and festivals, it’s apparently rocket science.

People who clean up after festivals, what have you found? from AskReddit

Here are just a few of the wild things people of Reddit have found left behind.

Can’t imagine how they got it past security or how they didn’t get bounced once they were inside.

Nobody ever came back to claim it either.

Back in the 90s there was a Rock Fest that was nicknamed Mud Fest due to the heavy rains turning the entire area into a mud pit.

Someone asked about lost and found, and the radio station said that for the first time in Rock Fest history there was nothing in the lost and found, because anything left behind was under a food to mud by closing time.

I volunteered to clean up after a local festival and we got a locally famous rich family show up. They left a purse with £350 cash inside and as their name was on the inside, we phoned them up to collect it.

They told us they couldn’t be bothered to come get it and we could keep it! The four of us working kept a tenner each then gave the rest to a local homeless shelter. Ended up getting paid for a volunteering job!!

When I was in high school I was involved in the local youth group. We went to a Christian music festival called Ichthus, and we got a discount if we helped clean up after. Our group was assigned to tear down the women’s shower building that was set up temporarily for the festival.

There were used tampons galore, a couple bags of human s**t, and everything was soaked in pee. That’s when I realized women were just as disgusting as men, possibly worse.

I once found a big white fridge!

It was connected to a car battery, but it wasn’t running (anymore at least).

Can’t believe the effort it must’ve required to get it there. No cars were allowed on the camping area.

Not someone that cleans up but I found a huge bag of what was obviously crystal meth at a festival once.

The funniest part was about an hour later I saw a bunch of guys frantically going through their pockets repeatedly while running around looking at all of the trash on the ground.

Every now and then one of them would get extremely excited and go sprinting over to a random piece of plastic on the ground then pick it up and look extremely disappointed when they realised it was just trash.

Many wallets, a lot of condoms and drugs, passports, cash, notebooks, keys from houses and cars and loads of clothes.

Also once I found the ticket for another festival that was just straight after. Also loads tent stuff which I have some of in my house, such as some mattresses and tent bags.

I used to work a burger van at Leeds festival every year and every year we had people asking if they could pay with an assortment of random stuff.

Mostly drugs, once a pair of flip flops, but I had some guy wanting to swap a packet of ramen for a burger, a single shoe for some fries, etc.

I was cleaning seats and i found a knife. Turns out a guy was trying to murder his best friend (i dont know why or how).

Police were investigating that one for sometime.

I used to work at an amusement park doing theatre tech work- there was a special event one night and we worked overnight to strike a series of temporary stages that had been brought in for the event.

My coworkers went to the bathroom and evidently found it just covered in cocaine. Thankfully, our job was just to strike the stage and equipment, but I feel bad for the guys who had to clean up

I found so many glowsticks once, even though the festival ended way before dark.

I’m sure people bought them for their kids to take home, but it still confuses me for some reason.

After the Canada day celebrations at the legislature grounds in Edmonton.

Me and my friends would walk around after and one time we found a Camera, A grinder full of weed and a cooler half full of beer and a bottle of booze.

Quite the find for some junior high kids.

Not a major festival, but a celebration for a nearby church that was celebrating 50 years of being a church.

Found a diaper (completely soiled) under the stage as we were taking it apart. Which would explain why people distanced themselves from the stage. Also found a vape pen under one of bounce houses.

I also found a larger bag of unknown pills on the walk back to the car when leaving the venue .

We were successful on getting the iPhones back to their owners rather quickly . Both rang within minutes of finding them .

Bottles of urine at numerous locations. In one instance a pile of bottles filled with urine. I’ve been to Roo four times and 100% empathize with anyone not wanting to walk all the way to a porta potty. But you can’t dump it out in the morning or before leaving? C’mon

The most annoying thing was those hydro bead things. The volunteer supervisors said everything that wasn’t grass or dirt had to be picked up. Those little things are obnoxious.

It’s shocking how much of this is volunteer work. We salute you, brave souls.