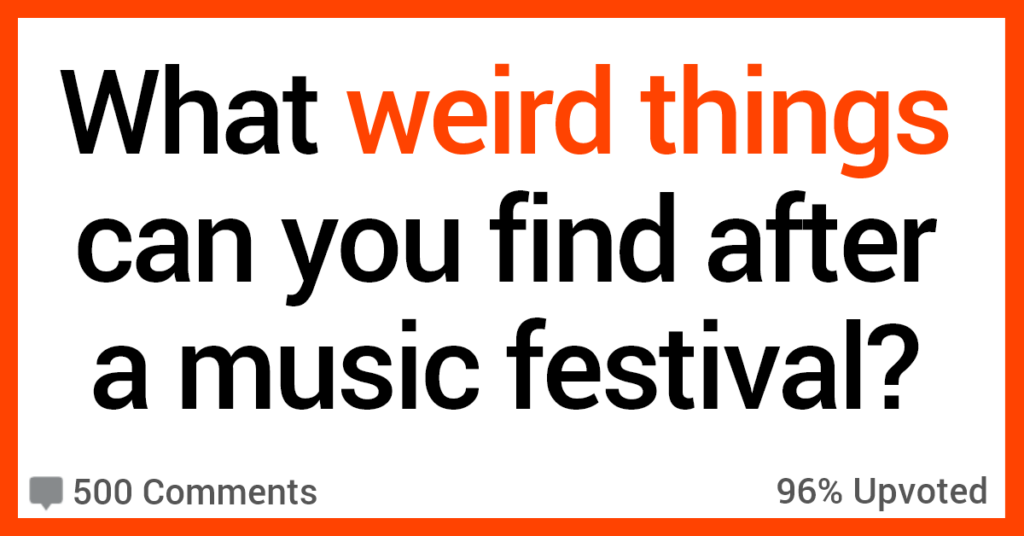 If you’ve ever been to a concert or a festival but have never been part of the WORK CREW for that kind of thing…say a prayer for them.

And also, for the love of god, clean up after yourself.

People who clean up after festivals, what have you found? from AskReddit

A surprising number of Redditors have experienced this. The four MOST common themes were drugs, booze, tampons, and condoms. But there’s a little variety to be found nonetheless.

We found some marijuana, quite a lot of money (something like $100) and the first year we swiped some rather expensive lightweight tents that were left behind, which we cleaned and used for years afterwards.

A few nice sleeping packs, too.

Found too many pairs of panties, lots of flip flops (eww), many pairs of sunglasses (including some sweet aviators), lots of cannabis (legal in Canada) and almost as much cocaine. Condoms both in and out of packages.

Probably most disturbing was a single baby shoe. Post festival cleanups are always very much a “lose faith in humanity” sort of experience.

Loads upon loads of drugs. It was turned in to the police. Mostly.

Expensive a** tents that easily went for $300 once cleaned.

Lots of phones, wallets and some lose cash.

A cat (?!), it did have a microchip and was returned to the owner.

Two tortoises. Adopted by a volunteer who already had a bunch of them at home.

High grade chemical gloves were a must.

I used to help run a music venue. Cleaning and tearing down after the shows was usually the best because that meant finding items to put in the lost in found; one for the backstage for items left over by bands and one behind the ticket counter for the crowds.

We usually gave the items one month to be claimed, posting about them on social media, before we could claim them for ourselves.

The biggest or most expensive item left behind that no one ever claimed was a entire drum set. It wasn’t uncommon for bands to not come back for their stuff since they usually lived too far away.

If you’re gonna s**t in a cooler please bring it home with you or dispose yourself.

Of course that’s the good stuff, to find that you have to wade through an ocean of destroyed tents and trash, about a million cigarette butts and every bodily fluid a human is capable of producing.

Hahhahah this was a small edm concert organized at our college . I was one of the volunteers to help Clean up after. I found a small wad of cash tied with a rubber band .

Instinctively i was just curious to know how much was there. Turned out to be around $250 if u convert it from my local currency. I probably would have kept it , but sadly it did have a small piece of paper with along with the rubber band and a name .

Unfortunately i knew the person although not close to me. Gave it up at the office and it was returned the next day .

I used to clean up after busy weekends at a UK motorsport venue.

One area of the paddock was a trove of wind-blown banknotes. You’d find something there nearly every shift, sometimes several.

You’d find the occasional soiled nappy, but apart from that the striking thing in my experience was the booze – all that wasted, wasted booze. Bottles and cans nearly full, or even unopened – all of it needing to be chucked. Some days I’d pour away gallons of it.

Apart from that it was mostly napkins, crisp packets, and soda cans.

We did volunteer/crew for a small outdoor festival several years ago. Two days of bands, open ground seating etc.

The main thing I learned was that most people are pigs and a**holes who expect others to clean up after them.

Seriously, what kind of trashy person leaves a pile of dirty diapers on the ground?

I use to be a carney back in the day and our company had a rule that you got to keep all crap that fell out of people pockets on the rides that went upside down if you were the operator that night, like the cage ferris wheel, ring o’ fire, or even the scrambler had good payouts sometimes.

All staff would have to draw straws or we would full out fight to operate those rides every night because we would walk away with some mad cash and all kinds of other “illegal” goodies, like drugs and guns. You also had to deal with vomit on occasion (not as often as you think), so it had its drawbacks. Still worth the extra money.

Found a pretty fresh pair of timberlands that were in my exact size! Still going strong 4 years later.

Good things that were offered: A pop-up tent and a crate of fruit cider.

Awful things I found: A human s**t hidden under a pie box.

Not cleaning up, but I just happen to find a set of keys in the grass after a Fourth of July celebration.

I turned them in to an official, but what a miserable feeling of getting back to your car, fumbling for your car keys, and not finding them, then turning around and looking at the acres of parkland, all in the dark, wondering where to even start looking, wondering if they were found and turned in, who would they have been turned into.

It was a bad night for someone or maybe a family.

(I was volunteering to clean up after a huge concert festival thing in my town.)

Found a sock, and when I went to pick it up and throw it away, It was squishy, and because I was curious for no reason, I looked inside, it was full of what I thought was ketchup and…… white sauce, so I f**king yeeted it, watched, and heard it splat on the ground, threw up in my mouth a little, then noped outta there after that. I’m so glad I didn’t forget to bring gloves that day-

Best thing I found was a bit of dirt weed and some cheap shades that were only moderately scratched.

I think the conclusion to reach here is basically that people are disgusting.