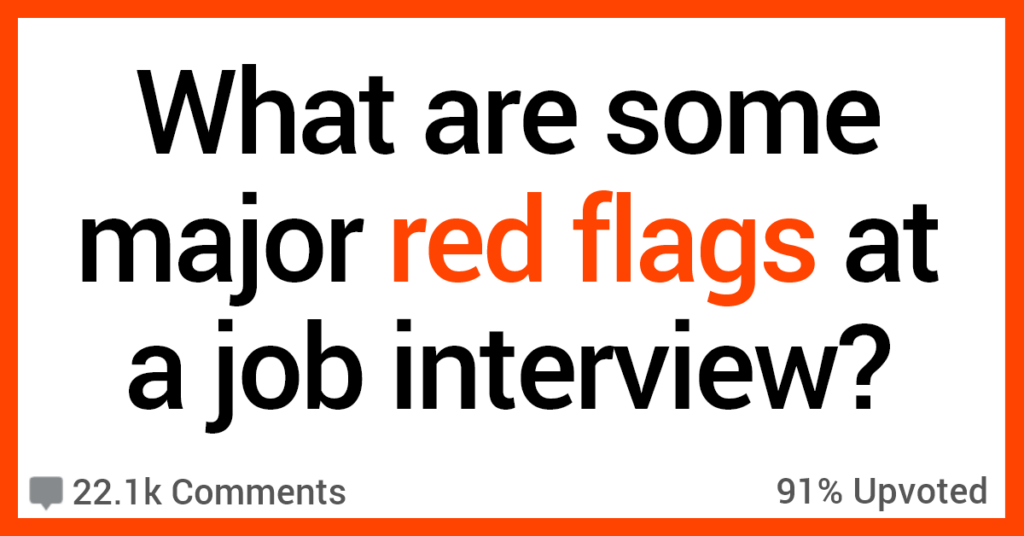 When you go into a job interview as a prospective employee, the feeling is generally that they have something you want and you need to impress them enough to get it.

But sometimes, the moment you go in, you realize you don’t actually wanna sell what they’re buying.

What are subtle red flags at a job interview that say "working here would suck"? from AskReddit

Here are a few red flags to look out for, via the folks at Reddit.

1. Too steep a learning curve

I always ask about training and learning curves. Every job I’ve had that went wrong- I notice that when that question came up they stumbled.

The current job I have, when I asked the question they had sparks in their eyes as they explained the whole process from day 1 of shadowing to the transition to working solo. And even when covid hit they managed to continue without skipping a beat.

Besides always hiring, they seem almost overly eager to say, “Yes, we could do that!” to everything you ask.

No job will have literally everything you want, and if your gut is telling you they seem to be promising a bit more than they can offer, they likely are.

Once an interviewer straight up asked me if I had any trouble working for free on weekends… I told them my free time is more valuable than anything and that the only way that I would work a weekend is if they are paying me and if I felt like working a weekend. She got really mad at me and ended the interview right away.

Biggest red flag I’ve ever seen because they didn’t even try to hide it.

I was once part of a group onboarding for an IT job. They handed us all the one-page new hire “contract” and everyone except me signed immediately. When I read the paperwork, I discovered we were signing a mystery document. Clauses included “I agree to abide by the personal search and seizure security policy (attached).”

Without other pages, there was no way to determine what I was agreeing to.

I kept requesting more and more pages until the HR drone said “ok, I guess [me] is just determined to hold everyone up. We will handle you separately if you’re struggling so much.”

After I walked out and drove home, I called the hiring manager to apologize for not taking the job. He informed me that HR reported I had walked out after refusing to be drug tested

We cater lunch and dinner for our whole team!

Sounds like a positive, but what it means is, “We expect you to be working past dinnertime hours, and there will be a lot of social pressure to never leave, and to socialize with the team well past working hours. We don’t understand that anyone might want a life outside of work.”

Less of a problem now, hopefully, but in the tech bro heyday, this was super common.

When you are signing all the forms they give you and you are taking your time to read over every document so that you can fully understand what you are getting into and people come in and start telling you that you don’t need to read this and that just sign here and so on.

7. Talk to somebody already there

My current boss gave me a great tip on the last interview I had. He said “Ask them if you can pick an employee to chat with about how they like the position you’re applying for. They’ll give a better impression of the place than management”.

I got the job I was interviewing for. I turned it down because the above is the kind of management I want to keep in my life. Also the place undercut my pay offer I found out which is certainly also a red flag.

Jobs where the expectations of the position aren’t clear.

The person hiring you should be able to give a clear idea of your responsibilities are day to day in a practical way.

It shows that the company understands what it wants out of the position.

I’ve worked a couple positions that had a really hard time figuring out who was supposed to do what that lead to a lot of confusion and both of them had this in the interviews.

If the company you’re working for can’t define what success in that position looks like you won’t be able to either.

I interviewed for an independent contractor position on a piece rate. It’s hard to predict how much you’re going to earn on a piece rate, so to attract me the manager showed me some paystubs from his guys. I noticed that:

1) He could easily cherry pick paystubs to show my his best guys best weeks. All that tells me is that I’m likely to make less than what he’s showing me, at least on average.

2) The paystubs were obviously designed to be confusing. They were a full page and absolutely covered in data. He wanted me to be impressed by a dollar amount (obviously not accounting for costs which the contractor has to carry or taxes which the contractor has to deduct and pay) but he took them away before anyone could have deciphered what the pay period, piece rate, number of jobs or kms was.

3) He showed me other people paystubs! wtf??

Another red flag is that they were desperate to hire, because they didn’t have enough contractors to deliver the work contracts they’d already sold. I had two guys from different offices call me after I’d declined the position who apparently still thought I was considering it.

I went into an interview for a low-level admin position, and they made my put my cell phone in a bucket up front, stating “no phones are allowed in the back. it reduces productivity.”

Big NOPE for me.

I came in for a job interview at 7:30 PM. The entire staff was still in the office. Should have known right then that 9 to 5 was not ever going to happen.

One day I worked until 2:30 AM to finish up a big project, and my boss said to me I could come in an hour later the next morning. Gee thanks bro, with my public transport/travel time that gives me a solid 2 hours of sleep instead of just the one.

If they tell you not to discuss pay.

I never ever followed this rule. It’s important to find a way to broach the subject with your coworkers.

If they are of the mind frame that it’s impolite to ask someone their pay then tell them yours and pay very close attention.

Do they smile a bit? Do they look disappointed? Try to gauge from that.

Because “we don’t discuss pay” has always been a way to hold down wages and nothing else.

“do you have a strong personality” meant everyone else who worked there were raging c**ts who i literally got into massive shouting matches with and quit over within 6 months of having started.

The money was good but no ty.

I once turned down a job offer because they mentioned that the previous person in the position had quit after a few months, and most of the people I interviewed with seemed stressed out.

My gf once during interview, whilst touring the business premises (with the director of development) asked “do you do flexible working, or work from home some days”

So just, yanno. Try to avoid those places. If you can.