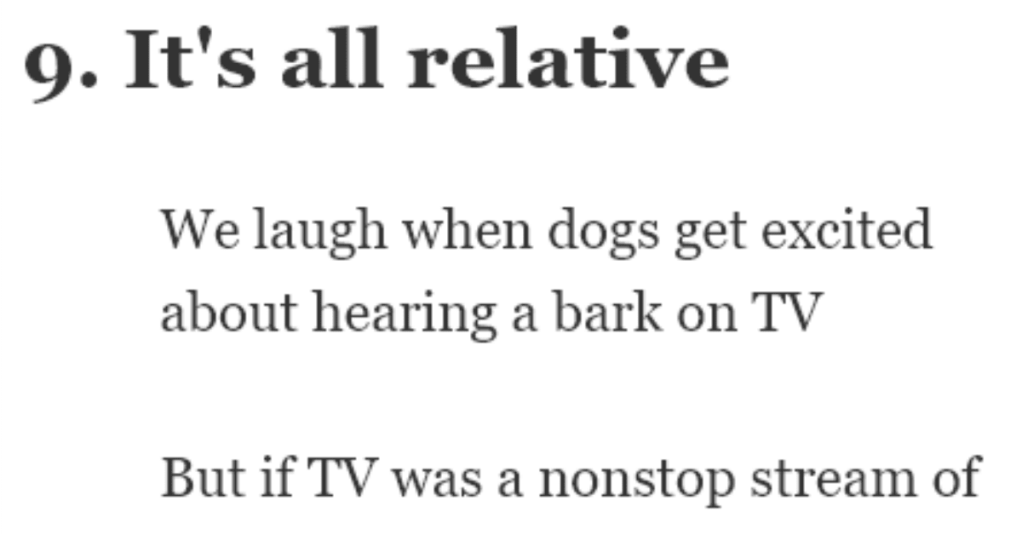 27 of the Most Fascinating Shower Thoughts, Courtesy of Reddit

If you’re looking for inspiration, look no further than r/Showerthoughts, a subreddit with a sort of perpetual prompt: give us something interesting to think about.

“‘Showerthought’ is a loose term that applies to the types of thoughts you might have while carrying out a routine task,” say the moderators, “like showering, driving, or daydreaming. At their best, showerthoughts are universally relatable and find the amusing/interesting within the mundane.”

Here are a few of the best from our reliable Redditors. Let’s become enlightened.

The drink list on a restaurant menu is never at the very front, despite it being the very first question asked at every restaurant.

Pavlov probably thought about feeding his dogs every time someone rang a bell.

The syllables in ‘on your mark, get set, go’ are a countdown.

4. Whoever collected the most wins!

5. And there always will be

There is a number so big, no one has ever wrote it, said it, or even thought of it.

6. They’ll send him to a farm up-galaxy

If Wookies have a 400-year life span, then Han Solo is basically like Chewbacca’s third dog.

Lots of random people own rare, valuable items without knowing it.

When you’re growing up as a kid, you don’t realize you’re also watching your mom and dad grow up.

But if TV was a nonstop stream of unintelligible noises and then someone suddenly spoke to you in your language, you’d be pretty f**king startled, too.

Gummy worms have more bones in them than actual worms.

It’s amazing to think of what he’d be able to accomplish in athletic wear designed for the specific extreme activity he was involved in.

If someone tells you a plot point for a story in advance, it’s a spoiler.

But if the author does it, it’s foreshadowing.

14. Had to think about this one for a second…

Almost everyone will go around the sun more times in their life than around the Earth.

Santa Claus knows exactly where all the evil people are in the world but doesn’t do anything about it.

16. The first shall be last

Being the last person to comment on something is actually a lot harder than being first.

Your password has probably locked you out more times than it has locked other people out.

Anxiety is like when video game combat music is playing but you can’t find any enemies.

All the superheroes appeared in the background of his story.

Your thoughts might actually be in such a personalized, coded shorthand that even if someone COULD read your mind, they wouldn’t understand what the hell you’re thinking.

Light bulbs were such a good idea that they became the symbol for a good idea.

A lemon is not naturally occurring.

It’s a hybrid developed by crossbreeding a bitter orange and a citron.

So life never gave us lemons; we invented them ourselves.

What wisdom do you have to contribute?

Drop it on us in the comments.