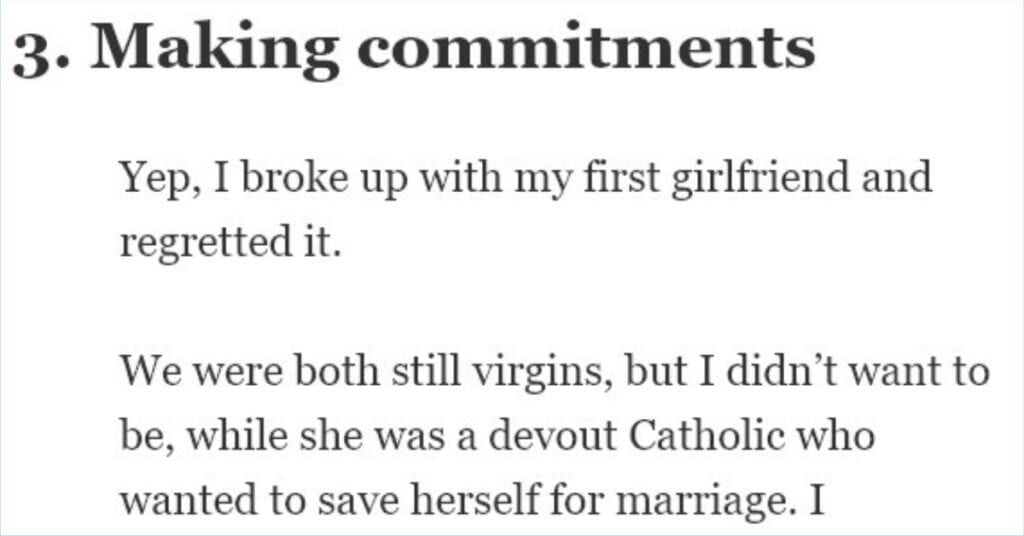 You’ll often hear people refer to “the one that got away.”

Which has always been a little weird to me because it makes it sound like you were romantically involved with a fish.

Is that why we also say there are other fish in the sea? Why are we so obsessed with fish romance?

Have you ever broken up with someone and regretted it later, if so why? from AskReddit

What are the real stories of the ones that got away? Let’s find out.

I didn’t know what other relationships were like for comparison. So when I started dating other girls I realized I screwed up.

I did. I regretted. She took me back. We married.

Take away from that what you want, people.

Yep, I broke up with my first girlfriend and regretted it.

We were both still virgins, but I didn’t want to be, while she was a devout Catholic who wanted to save herself for marriage. I respected that, but 17 year old me felt unhappy feeling like I was ‘never’ going to get to experience sex, though I still happily dated her because she was my first and I was happy enough to be able to tell my friends that I had a girlfriend.

I broke up with her, but after going through that experience and feeling how terrible it was for both of us, first heartbreak and all that, I turned around and won her back. I did it for the wrong reasons – I felt guilty for hurting her, and felt in retrospect like breaking up over sex was a shallow thing to do.

Thing is, the spark was gone after that so she broke up with me soon after anyway. It was for the best – we were incompatible in other ways that became apparent later – but hearing her say ‘I don’t love you anymore’ was perhaps the most savage emotional gut punch of my young life.

And that was how I learned that

a) sex matters, and sexual incompatibility can ruin relationships

And b) sometimes, a relationship can be broken badly enough that it can’t be fixed.

Shortly after the most crushing breakup I had, I found a girl a few years younger than me with two kids just looking for an “adult friend”. I was clear about not looking for a relationship and we started hooking up.

A couple months in I really liked this girl and asked her to make it official. She agreed and I was super into her, but awkward with the kids. She never pushed me to be more involved with them too fast and the kids and I met slowly and then more and more.

We split up “for real”, which lasted about 8 months. Then by fluke I ran into her while visiting my parents and we rekindled. I didn’t even realize how much I had missed her until then. We’ve been doing long distance for about 9 months now and I’m looking for a job back in town. I’ve proposed, she accepted, and she’s constantly sending me links to dream homes we should look at. The kids and I love each other and when she works I’ve been taking the kids to school and picking them up and they both call me dad.

I think the biggest thing that kept breaking us up is that we both went into it refusing to want a real relationship and directly looking to not fall in love, and let our stubbornness and egos (which we both have plenty of) refuse to let us reevaluate or be the first to tell the other we were wrong.

Gorgeous, smart, funny, affectionate, liked everything I did including football and metal. Got me an engraved flask for my birthday with an inside joke written on it.

Broke things off because an ex had come back into my life. HUGE mistake.

Not only did things not work out with the ex but I burned the bridge with the other woman. She blocked me on FB and IG.

No, because it was a long time of neglect, and I couldn’t take it anymore.

7. The routine of it

Yes. We were together four years, she was the first person I wasn’t related to that said that they loved me… I was hooked. I was unhappy for a majority of the relationship, I was cheated on, she made me hate myself.

I missed the routine of it. I missed going to our places. I missed the inside jokes. I missed the friend she was. The friend that attaches to the end of the word “girlfriend”. I am thankful that when she came crawling back 2 years later, married and lonely for me, I was strong enough to say “no.”

She was my soulmate. She understood me, always had my back, and put up with my BS.

So off I went to sew, and when I was finished, she had already settled down, with another guy.

Not really broken up because we weren’t dating, but at the time, she was a close friend of mine. Used to play video games with each other until late 2015, then we started to distance each other for a bit but still kept in contact.

I completely stopped talking to her around early 2017 because I was blindly obsessed with another girl who became toxic to me a year later and it took me 6 months to recover from that.

Last year, with the lockdown and all, I started reminiscing about my old friends that I have left behind and remembered her. Took me a few weeks to consider if I should message her again because of how long since we last talked, even though we never ended on a sour note.

Eventually messaged her and asked if she remembers me, she said not really (although she still had my number saved), but was still really friendly and pretty much the same person as I remembered from 2015. We still are in contact now but we are both busy with our own studies, and I think she may have slowly remembered who I was before. Planning to talk to her more and maybe meet up with her for the first time by the end of the year.

I knowingly dated them while they were in a(n abusive) relationship and before i knew about the abuse, I told them it wasn’t fair for me to have them while someone else loves them, and that the abuser was the better choice.

they came back over a month later covered in bruises and told me about everything, from their partner beating them to cheating and making this person watch, and that they did not feel guilty for coming back to me because I helped them realise that they dont deserve the sh*t their ex put them through. so i got them in the end, but I still feel so awful for sending them back to that h*llhole even if i didnt know. we’re in the process now of getting the abuser to agree to either move out or let them move in with me.

She was a great girl. I was really sick. Got her to break up with me (hello self-sabotage).

I don’t really regret it because she’s doing well, and so am I… but still, sometimes, I do think of her… and the nostalgia hits you.

I learnt so many good habits from her, we had fantastic conversation (she was oozing brains), she taught me a lot, she was really affectionate and understanding. She tried to be there for me, but I never really let her in. She had her own issues, but overall, she was a fantastic human being, and someone you could grow old with.

I do regret that I am never going to see her, and I am not going to get an opportunity to apologize for the way I was.

Reddit, if you have something to say to someone, say it. Trust me, just do it!

Immaturity, mostly. Combined with my own doubts and insecurities. Then life sometimes just gets in the way of your plans when you’re young.

You sometimes don’t understand what you want or need in life. It’s for some, not until you’ve lived a little, (laughed, cried, smiled) a little, until you kind of understand who you are and what you want. Everybody has the story of the one girl who got away. Question is, did you miss out on an idealistic version of a person you knew, or did you find a person who helps you to be an ideal version of the person you would like to be?

Regretted not getting back together when she offered. We broke up on a camping trip July 5th some years ago because she was having a hard time with the long distance.

She said she’d still like to be my +1 to my mothers wedding in mid August, and I still wanted her there, so that was the next time I saw her.

I was still too hurt from the breakup to accept at the time (telling myself that if it didn’t work once it would never work).

I guess that gave her the closure to move on, and we grew apart after that. By the time I got over myself and my hurt feelings, it was already too late.

She’s still the only person I’ve ever been in love with.

I don’t regret breaking up with him at the time, but a few years later I wonder “Man, if I was this mature back then, that relationship could have been way healthier.”

She never gave me back my CDs.

I should have gotten them back first.

Heartbreak all around. Especially for those missing CDs.