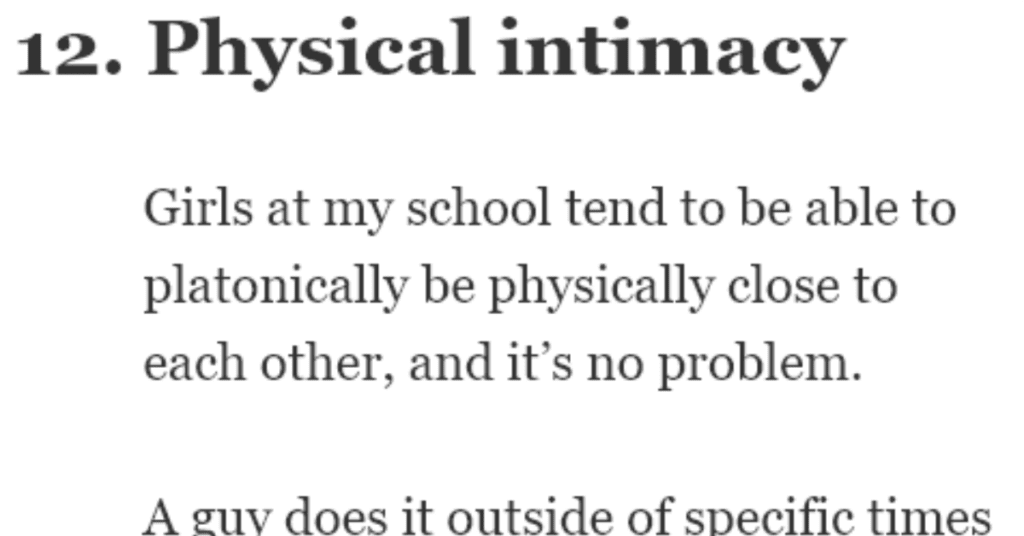 15 Double Standards That Might Just Be Hitting Men the Hardest

We hear a lot about double standards that benefit men over women, but how often does it go the other way?

Actually yes. Of course it does.

What is a double standard that is seen positively when women do it but negatively when men do it? from AskReddit

Let’s see what they got.

So f**kin many man, that girls on social media flex or brag about like it’s normal or okay that they have bad traits.

It’s so annoying to see and get grouped with them.

Guys are supposed to be strong and crush down their feelings at least that’s what I was always taught/forced to understand from multiple sources.

I don’t have anyone to talk to about it because no one wants to hear it.

Everyone wants to tell me their problems but, no one wants to hear mine. It wears on you… hard.

3. When a child needs help

A few years ago a 14/15 year old girl who lived over the road from us, knocked on our door. She was scared as she had just got home, in the dark and her brother was supposed to be home but was out. She thought there was someone else in her house as she could hear banging and shouting. So I went over, she let me in and I hollered and made a load of noise. She asked if we could check up stairs, in her bedroom, so I ran up the stairs with her behind me.

A little bead of cold sweat trickled down my back as my brain cell came into alignment.

What the f**k am I doing – I am in a girls bedroom, alone with her, it’s late and dark and I don’t know her – while my wife is over the road. So I asked her to leave and go sit with my wife while I searched the house. Everything was fine, the house was empty and the girl was grateful. Her Dad even came to thank me the next day and mentioned that it might have been awkward.

When my son was little, I was a parent, but my husband, if I left him alone with the child he helped create, he was “babysitting” (according to anyone who asked me where my son was).

Also, I always got comments like, “Oh, your house is going to be a mess when you get home! Did you tell him what to feed him?”

I know it’s been said before but the double standard for female p**os is insane.

While men are condemned and ostracized (rightfully so I should add) the women p**os get a slap on the wrist and the boys they abused are congratulated and even seen as weak or un-masculine for speaking up.

Not saying we should be allowed to body shame, but that a lot of women do it even tho men get socially executed when we do it

I find it pretty dumb that it’s totally fine for girls to hit/slap/punch whether joking or not, physical assault is totally fine and no one thinks anything of it because often times “the guy can handle it if it gets out of control” but if the guy were to handle it, he’d be charged with assault and lose his job and friends.

When someone posts pictures of their kid daughter / niece / granddaughter on Facebook, all the comments are from women only.

Not one comment from men, because you know. Inappropriate.

I haven’t even commented on my sisters’ pictures because I’m an uncle. And we all know the uncle, from newspapers, is the obvious candidate to be a predator.

Taking young children out in public.

Sometimes I have to babysit my little cousins and I sometimes take them out for ice cream or a movie as any fun caregiver would do.

If you’re a male, people will give you nasty looks and act suspicious and gossip out loud about the “p**ophile”.

Body and self esteem issues.

“That’s an job” when something they don’t want to do needs to be done.

If a man suggests something is a “woman’s job” he is vilified but if a woman says something needs to be sorted out by the man that’s fine.

Girls at my school tend to be able to platonically be physically close to each other, and it’s no problem.

A guy does it outside of specific times (fighting in sports), and it’s suuuuper uncool, and generally looked at as gay.

Given, I’m bi, but I’m super fortunate that I have both boys and girls who I’m able to physically close like that.

Continuing to hit on someone when they clearly don’t want it.

People will take issue with women who go really far too far, but they get a lot more leeway before it’s seen as sexual harassment

Owning/using lotions, facial cleansers, hair wax, and other personal products of that sort.

God forbid I want to look and smell nice.

Sure if a woman owns a bunch of cats she may get the “crazy cat lady” stigma but I’ve had friends (early 20s) say they wouldn’t date a man who owned/loved cats.

So weird to me.

It’s just another animal to love and hold, I am not a cat person myself but I understand they’re cute and cuddly when they want to be.

And much easier to house in apartments at our age compared to dogs.

I’ll love cats all day, I don’t even care.

What do you think of these examples?

Give us your opinions in the comments.