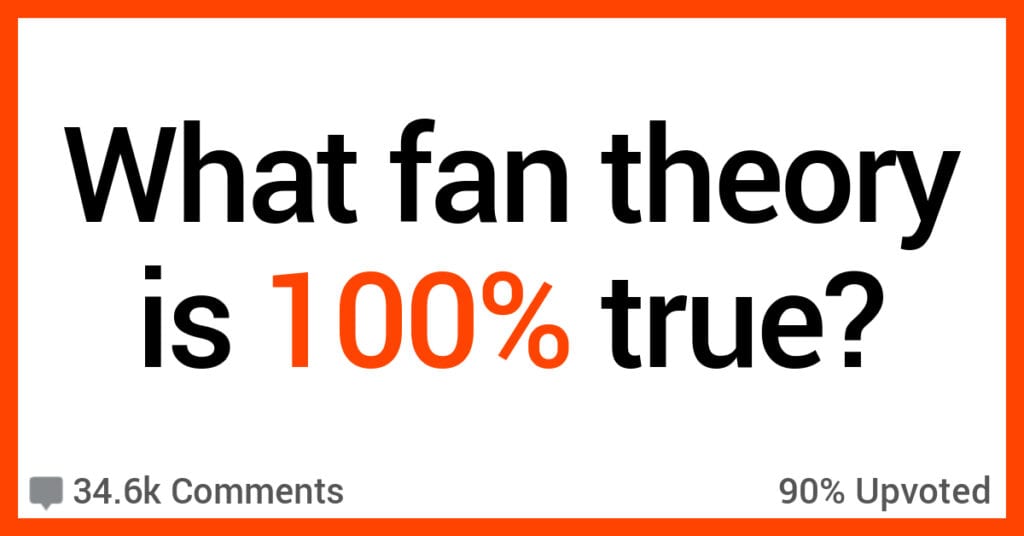 The stories we take in through movies and TV can become such a big part of our lives that they take over our imaginations and push us to create more within those worlds than is even available to us.

What fan theory do you 100% accept as true? from AskReddit

So, what’s unofficially official in the minds of Redditors? Let’s dive in.

Kevin Malone, if not actually a genius, is certainly much smarter than he lets on.

Clearly he’s lazy, and gluttonous, and blah-blah-blah, but after the merger with Stamford, and its reveal that Martin had served time, Kevin realizes that he needs to give plausible deniability to any sort of financial maleficence that the accountants have been doing, and flanderizes himself in front of the camera.

Occasionally he slips up and reveals himself to be something a math genius, and has to backtrack, and play it off as some kind of Food-based idiot savant.

Its how he was able to afford ownership of the bar at the end of the series, I’m sure he made a bit just cashing in all those free drinks, but actually enough to buy a bar? I don’t believe it.

The reason each It’s Always Sunny in Philadelphia episode starts with a date and time is because they’re all testifying against each other in court.

3. The Road to El Dorado

Miguel and Tulio may not be gods, but the armadillo that follows them around absolutely is.

In Disney’s Ratatouille, the old lady in the beginning of the movie living in the house next to the river is the food critic, Anton Ego’s, mother.

In the flashback scene where he eats the ratatouille you can see similarities of the house from the beginning, her face and I think the bridge.

The town from Footloose is the same town from Tremors. The ban on dancing wasn’t a puritanical attempt to control the youth. The town elders were aware of the graboid threat, and banned dancing out of the fear that it would cause rhythmic vibrations waking up the creatures sleeping below the town.

Kevin Bacon’s character in Footloose stayed in the town, growing up to be his character in Tremors, at which point he has to try and contain the danger he inadvertently released.

The monsters in Courage the Cowardly Dog are regular people but seem monstrous from Courage’s perspective (since he’s cowardly).

Also they live in the middle of nowhere because his owners never take him out so that’s how he views the world.

The “real world” in the Matrix movies is just another layer of the Matrix, designed specifically to appeal to people unwilling to conform to the normal Matrix.

Humans in this outer Matrix have confirmation of their belief that something was wrong, and get to indulge in the fantasy of being a heroic freedom fighter against the faceless evil machines, thus choosing to accept this false reality.

The anomaly of the One is that he’s capable of rejecting both realities, which is the reason why he had powers in the real world.

That the book Rory writes in the Gilmore Girls revival is the original show – that explains why the characters are so different from the show vs revival miniseries.

She’s looking back at the past with rose colored glasses

Dale knew about Nancy and John Redcorn, but feigned ignorance.

Both to keep his home life stable, and because he knew Joseph would be raised as his son rather than Redcorn’s.

Mr. Bean is an alien.

That would explain his weird behavior and why he falls out of the sky at the beginning of every episode.

My own theory that in The Office when Andy proposes to Angela the people playing his parents are different actors because they are literally actors. As in he hired them to pose as his “perfect parents” because his own parents couldn’t be bothered to come.

The people in the season 9 episode Garden Party are his real parents, who clearly are d*cks.

Marty McFly develops the inability to back down when called chicken in the second movie and on because in the first film, he creates a timeline where his father has confidence, changing the parenting style of his own background

The PAW Patrol pups are part of a post-AI initiative attempting to train enhanced, but subservient, companion animals to replace the robots that almost destroyed humanity.

Everyone in Adventure Bay/Foggy Bottom/Etc are paid actors who place the pups in coordinated training exercises. Which is why Mayor Humdinger gets away with all his bullsh*t.

Parenthood has melted my brain.

Captain Picard only speaks French, but thanks to the universal translators, no one would ever know.

Jessica Fletcher killed all those people and framed others for it.

No way that a lady just happens to be involved in a murder every week.

Are any of those true? Sure! Why not! It’s all fiction anyway!

What fan theory do you love?