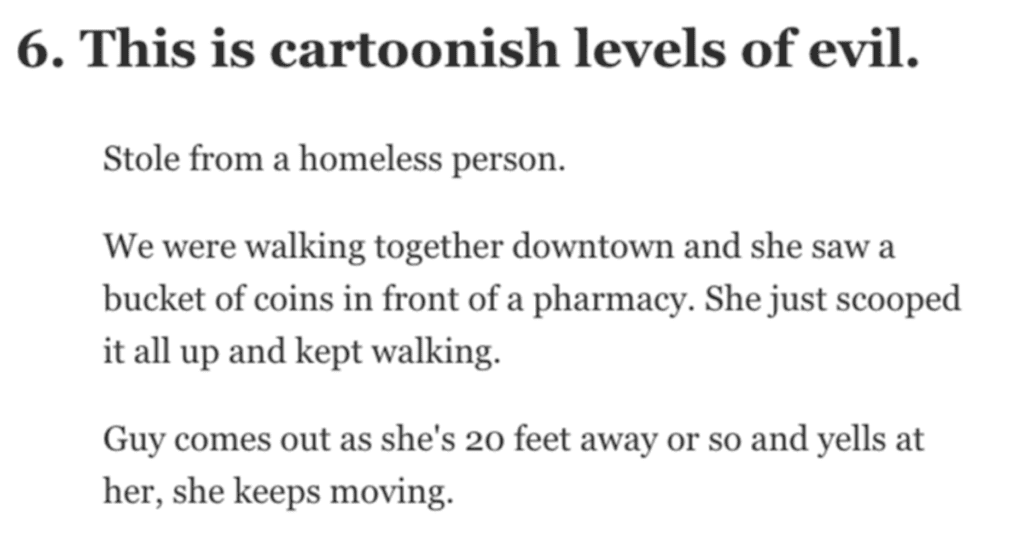 15 Guys Share Why Their Crush on a Girl Evaporated

I’ve had many a crush in my lifetime. The first big one was in 6th grade. Her name was Martha. Except no it wasn’t because if she ever reads this I’ll be very embarrassed, I don’t think she ever knew how much of a thing I had for her.

But while some crushes can burn for years, others can be extinguished pretty quickly.

What did your crush do that absolutely killed your interest? from AskReddit

There are SO many responses, and we’ve covered some of the best/worst ones about guys elsewhere, so today we’re going to go over a few about the ladies. Hold onto your hats, it gets weird.

I was giving her a place to sleep when she was feuding with her mother. After weeks of picking up after her, I dared to complain.

She had a screaming fit, packed up her crap and left.

I was glad to be rid of her, until later it got around to me that she was telling people on FB that I kicked her out for refusing to give me a blow job.

There is a lot I can forgive, but that was the first time I had ever had anyone just straight up make stuff up about me.

Her: Why are you leaving a tip?

Me: Because…the service was really good?

3. People have some funny ideas about betrayal.

I’m Black, she’s Black, our crush was mutual. Then she found out that I was once in a relationship with a White woman.

She then jumped down a rabbit’s hole of my “betrayal” of the Black family, and some other nonsense of my trauma of self hatred.

Never been turned off by anything faster than that.

We were in the process of getting together. She had called over and we spent an afternoon watching movies and sitting close together.

By about 8 in the evening she was considering staying later and I was casually encouraging her. She asked if she could take a shower, and I was like “yeah, sure of course”. Glad that the bathroom was clean and tidy and I had fresh towels.

Anyway about 4 mins later she calls me saying she needs help with the shower, and I give her a moment to get a towel around herself and knock on the bathroom door. She opens it completely naked, and shows me that she’s having trouble with the shower controls. So I’m kinda unsure whether to make the move or start with the controls so, I go with the flow and show her “this is hot & cold, this is pressure, this is rain forest, and this is power jets”.

In the 5 seconds it takes me to do this she has sat on the toilet. Which is kinda a weird thing because I need to be able to make the next move. And she’s . . . Well she’s sitting on the toilet, naked, with the lid up. Looking all disinterested. I’m thinking “ah I’ve screwed it up” when suddenly . . .

And she takes a dump right in front of me.

And then another one.

I was just “uhmmm I’ll leave you to it”.

5. You’ve gotta be kidding me.

6. This is cartoonish levels of evil.

Stole from a homeless person.

We were walking together downtown and she saw a bucket of coins in front of a pharmacy. She just scooped it all up and kept walking.

Guy comes out as she’s 20 feet away or so and yells at her, she keeps moving.

I stood there and just gave him a $20 and didn’t hang out with her anymore.

She said I “smile too much”

8. This sucks on so many levels.

Huge crush on a fellow uni student. I was invited over for what I expected to be a platonic study date (but hey, any time spent is better than just being alone, or so I thought).

Got there and found another student from class also. Ok, study group?

Turns out her mom and her set us up for a full press [multilevel marketing company] pitch. Video, literature, the works. I stayed a bit not to be rude, excused myself shortly, and only talked to her in class just in passing from then on.

She got blackout drunk at a party and violently sh*t her pants.

She invited me over to her place (not as a date thing, but just to hang out as friends). Her house was absolutely filthy and the glass of coke she gave me had a hair in it.

She was really cute, had a great personality, and was a genuinely nice person, but as soon as I saw cat shit on the floor near the front door and just dirty everything my crush disappeared and I left in a hurry

Said she was staring up a group for LGBT youth.

I asked her why, and then realized I had been barking up the wrong tree.

She ate a live snail.

She physically “shushed” me in a group with her finger on my lips while i was singing along with my friends to a cover band.

She slept with my dad

I’m suddenly counting myself very lucky not to have encountered anything nearly as bad as some of these. What can I say but yikes.