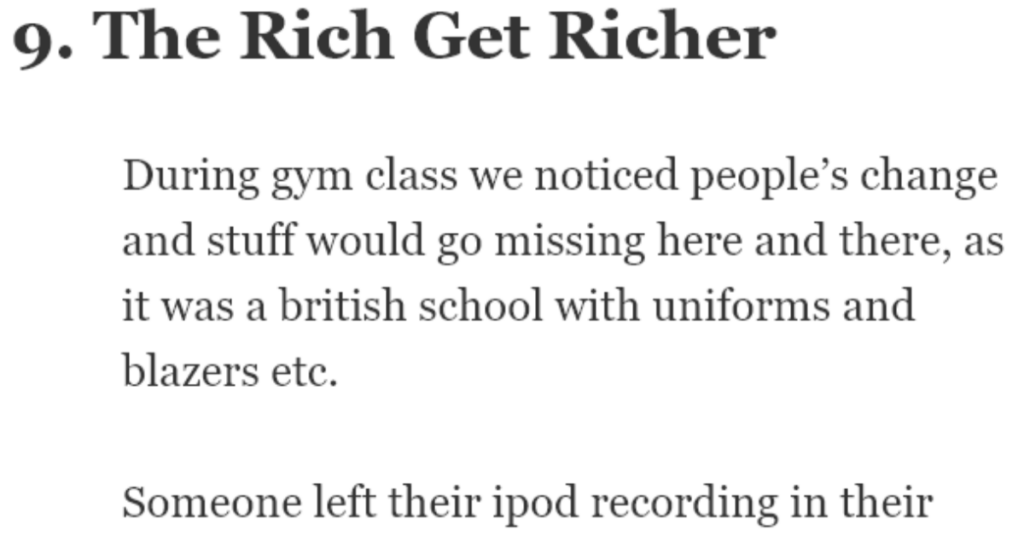 15 High Schoolers Who Went Down In History

Personally, I had a rather dull high school experience. The only folks who might be considered legends from that place were some dumb dumbs who pranked each other a lot.

One of them, for example, put a dead fish in the others’ car air conditioning system. Pretty sure they had to just sell the car for scrap.

What made the “high school legend” become a legend? from AskReddit

Our legend was actually the gym teacher. He became a legend by getting hit by a bus, getting up, getting on the bus and asking if everyone was OK.

~~He ended up getting fired about 5 years after I graduated because he was caught soaking raisins in vodka and then eating them over the course of the day.!!

Our history teacher was ex-military, and he was absolutely JACKED. Like this guy would bike ten miles every morning to school, kept an ab roller in his classroom, would eat salads and beans for lunch every day, the whole shebang.

Anyway, one day he gives our class a pop quiz. Jeff, the strongest, biggest guy in my class, goes up to him and asks:”If I can punch you in the stomach, and make you flinch, the entire class gets a 100 on the quiz.” My teacher took him up on it.

He was created by a group of my friends as a mid-year transfer student with a totally fabricated deep background that was so smooth ‘Joe’ even made the yearbook with a “picture unavailable” caption.

It’s pretty stupid but a friend wore a Walmart hot dog costume and for some reason everyone thought it was funny, started chanting hot dog kid and he won the best Halloween costume award of that year.

Next year he wore a penguin costume and as he stepped up on stage he ripped it off to reveal the hotdog costume underneath. Everybody f**king lost it. Sadly we have a rule that you can’t win 2 years in a row so while he didn’t get the prize we all knew who had the best costume that day

He cut his thumb off on a third floor window 5 minutes before final bell and busses.

Getting all of us locked in the school of an hour as the ambulance arrived took him away and the school cleaned everything up.

In ninth grade, one of our teachers got sick so we got a sub. And this kid just starts talking in a strong Spaniard accent (like super well) and convinces the teacher he is from Spain. And he talks this way FOR THREE MONTHS. It was hilarious.

And when another kid tried talking as a Spaniard too, he got really upset and accused the other kid of mocking his culture etc. Then when the year ended we had to do a presentation and our teacher who got sick came! So the kid just nodded through the whole presentation while his group mates talked. It was hilarious.

We had a carbon monoxide leak at my high school one day in which the entire school was evacuated to the football field. The leak was taking so long to fix, that eventually local news cameras started showing up. At about the 3 hour mark of waiting on the football field, one of the seniors ran naked across the entire length of the football field, IN FRONT OF THE ENTIRE SCHOOL. He ran straight at the cameras that were pointed at the field, hopped the fence, and ran across a busy intersection… butt a** naked.

One of the funniest things I’ve ever seen. Every single person, including the teachers, was laughing hysterically.

Kid became a legend that day for sure.

When I was a freshman, there was a senior on the last week of school who thought it would be legendary to streak on campus. He was 18. He was unable to receive his diploma on stage and had to register as a s** offender.

9. The Rich Get Richer

During gym class we noticed people’s change and stuff would go missing here and there, as it was a british school with uniforms and blazers etc.

Someone left their ipod recording in their blazer pocket and we caught the girl who’d been stealing our change red handed LMAO.

It was so crazy bc she was like the richest kid, she was actually a semi-successful child actor who’d been in several shows.

Guy was the running back for the high school football team, which I was also on. Tackling him was like trying to tackle a dump truck. It regularly took multiple opponents to get him to fall over.

One particular play, I was trying to block for him and he just ran over / through me *and* the guy I was blocking and went to score a TD.

Had to do a 1v1 tackle drill against him in practice once… I was a WR / CB, I never stood a chance.

He was a kind and soft-spoken guy though – he was a star athlete but he was humble.

He went on to be ranked 1st or 2nd in olympic wrestling in the country. A few years after high school he was working a job as a bouncer and was shot and killed.

Religious school. Until the principal’s niece (2 years older than me) got pregnant her senior year, the school had a rule that they would expel pregnant students.

After that, they changed it to “pregnant students are not allowed to walk for graduation if they are showing, but they are no longer expelled”. A girl my class got pregnant her senior year and was not showing 2 weeks before graduation, when the school had to decide if she was allowed to walk. She did not look pregnant then, but then POPPED in those two weeks and looked super pregnant at graduation.

But, they had already said she could walk, so she got to participate.

This guy never lost a wrestling match. Ever. Local, State, National champ as a sophomore. He was amazing.

My high school had about 220 total students in the middle of f**king nowhere Oregon and this 98 lb ball of muscle and hustle was getting TV crews to come out and film us practicing and s**t.

13. This is How Politics Work

I had a friend in Highschool who was cool as h**l but looked like an awkward Korean kid. (I mean he sorta was). Our HS had TVs in every classroom, and we needed a new class president. So the first person goes on the TV (Keep in mind, around 1400 kids were watching) and talks about why he should be class president, what they’d do.

Then the 2nd candidate goes up and talks about why they should be president and all the good things they’d do. Then my friend goes on TV, and proceeds to just sing the song “Zombie”, by the Cranberries, completely acapella. Including the “Zomb-BAYEE, BAYEE, BAYEE, BAYEE, OOOahhh, OOahhh, Ooaaah, OOYAYAYAYAYAYYAYA” part.

He won the election by a landslide. (But got replaced 2 weeks later cause he really didn’t care about it).

We had a teacher who was infamous for not letting you go to the bathroom no matter what. I mean so much so that if you accidentally started your period in class, she’d make you wait. (This happened.)

So there was a girl who we’ll call Katie in class, who tended to be a bit of a troublemaker. Katie hated that teacher, because she’d begged to go to the bathroom and got shut down every time.

At the end of the year, Katie asked one more time to go to the bathroom, The teacher said no.

Five minutes after that, Katie asked again, but said that the teacher was not going to like what happened if the teacher didn’t let her go. The teacher hit the roof and said that if she said one more thing, Katie would be sent to the principal.

Katie shrugged and said “This is on you, then”, and p**sed on her seat, right where she was.

The teacher sent her to the principal, who called her parents, one of which was a urologist. Her father yelled at the principal. The teacher ended up in deep s**t. According to other kids, she never denied another kid the bathroom again.

Katie was a f**king legend.

The high school was near both a grocery store and a petco, so someone bought sugar, a loaf of bread, and a hundred crickets.

They soaked the bread in sugar water, tossed it up into the drop ceiling, and let the crickets out into the ceiling as well.

They bred like crazy and the chirping was constant and echoed into the loudest possible brrrring noise I’ve ever heard.