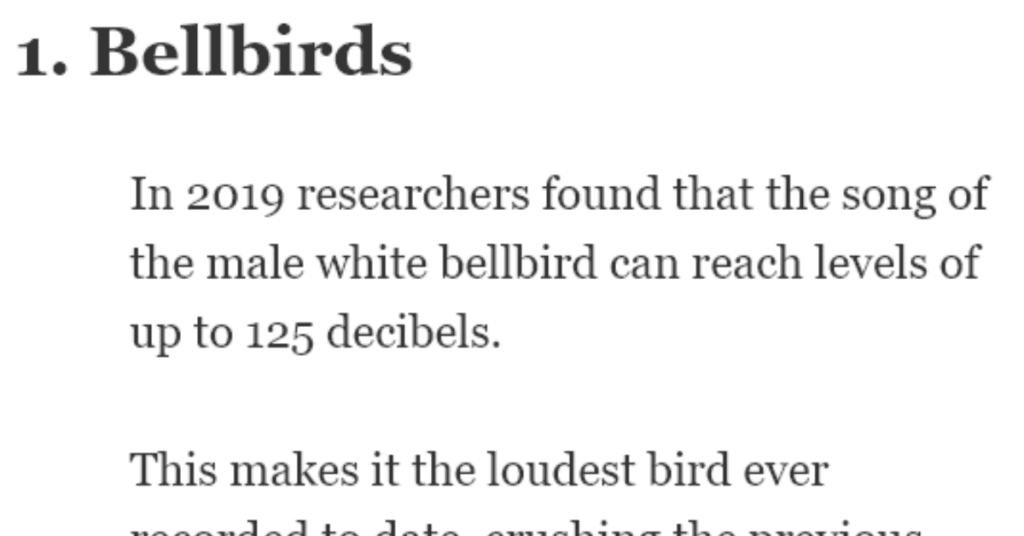 15 Mating Rituals That Would be Super Strange For Humans

One of the strangest writing jobs I’ve ever had was – no joke – an annual infotainment show for a zoo in which my partner and I wrote a series of sketches about weird animal mating rituals.

I have learned things I never wanted to know, and my search history is forever scarred.

What is an animal’s mating ritual you’re glad humans don’t have? from AskReddit

And now it’s time for you to join me in my forbidden/cursed knowledge. Behold, the words of Reddit.

In 2019 researchers found that the song of the male white bellbird can reach levels of up to 125 decibels.

This makes it the loudest bird ever recorded to date, crushing the previous record holder, the screaming piha (which has been recorded up to 116 dB).

The worst/best part (depends on how you look at it) is that it performs at its loudest when the female is on the same branch, screaming right at her, which is enough to even cause hearing damage in the female. Imagine walking into a bar, and just screaming at the top of your lungs, popping the eardrums of every girl in the bar, just to announce that you’re single.

The males repeatedly headbutt the females in the bladder until they p**s themselves, then they taste the urine to see if the female is in heat.

I’m sure some of you freaks are into that but still.

They make a ditch, fill it with p**s, trample around to make some delicious p**sy mud then splash around so it covers their whole body.

Females are humongous compared to males, so rather than doing it the old fashioned way, the male will bite onto the female, his insides will slowly turn to mush, and he eventually fuses with the female, depositing sperm in the process.

They’re born in freshwater, swim sometimes thousands of kilometers to get to the ocean and live out most of their lives, then when it’s time to mate they have to make the same journey back to where they were born except this time upstream against the current.

And on top of that, the majority of salmon die after spawning.

Imagine living your entire life knowing it all leads up to you making a grueling several thousand km journey just to bust one nut and die right after.

Male Antechinus refuse to eat or rest during mating season; they will smash nonstop until their body begins eating itself.

By the end of their mating season, the corpses of ragged males litter the breeding grounds.

Many garden birds have a ritual in which the male pecks the female’s cloaca empty of the sperm of previous mates before having his own go.

Imagine if men would suck out previous partners’ sperm before having s** with a woman. I have imagined and I am very sorry I did…

Evidently they do some some complex mating ritual, which eventually results in them locking claws as they fall to the ground.

Much fewer fatalities than the bee thing, but there’s still a chance of making birdie pancakes, rather than baby eagles.

A male will force about 50 females together on a beach as his harem, and will mate with them while biting them to keep them from fleeing.

Usually other males will be attracted, and the beachmaster will rush over to fight the newcomers, potentially rolling over and crushing some of his own offspring. They’ll slam and bite each other bloody, and the winner grabs a female and mates in triumph.

They are hermaphrodites and in order to determine which of the two individuals will be the male seed, they gnaw at each other’s penis until one of them snaps off.

Dogs get stuck during mating because of a process called a copulatory tie. It is also one of the main stages in the process of intercourse.

The male dog has an organ called the bulbus glandis, which is responsible for keeping him tied up with the female. The dog breeding tie basically keeps the semen secured inside the female dog.

The bulbus glandis expands and gets locked in the uterus, and the female dog gets higher chances of getting puppies.

You could never pull out! That’s the true doggy style

So much erect penis pee spraying and screaming, and then of course the risk of the act itself.

The only good part is they do it once a year instead of frequently, but still.

They live underground as larval nymphs, sucking xylem from tree roots, for years. Thirteen or seventeen, depending on the species. That’s all they do.

Then, a brood emerges from the ground, thousands or millions strong. Each one climbs a trunk or branch, molts one final time – and then the males begin to sing the song of their people. Nonstop, for the rest of their lives. The males and females mate, the females usually once, the males as frequently as possible.

The females lay their fertilized eggs, and then the adults (the ones who have not been eaten by predators or crushed by human accident) all die. When the eggs hatch, the new generation of larval nymphs burrow into the soil and the circle of life continues.

There are monkeys which hierarchy is based on having sex.

That means if you are a young male monkey, you got to hold your a** out for the elders, to be in better standing

The Suriname Toad keeps its eggs in its back the eggs infuse with the skin.

When the eggs hatch the tadpoles will live inside the skin of their mother until they have matured into young frogs and squeeze out.

Yeah, I’m glad we don’t have to do any of that.

What’s a weird animal fact that you know?