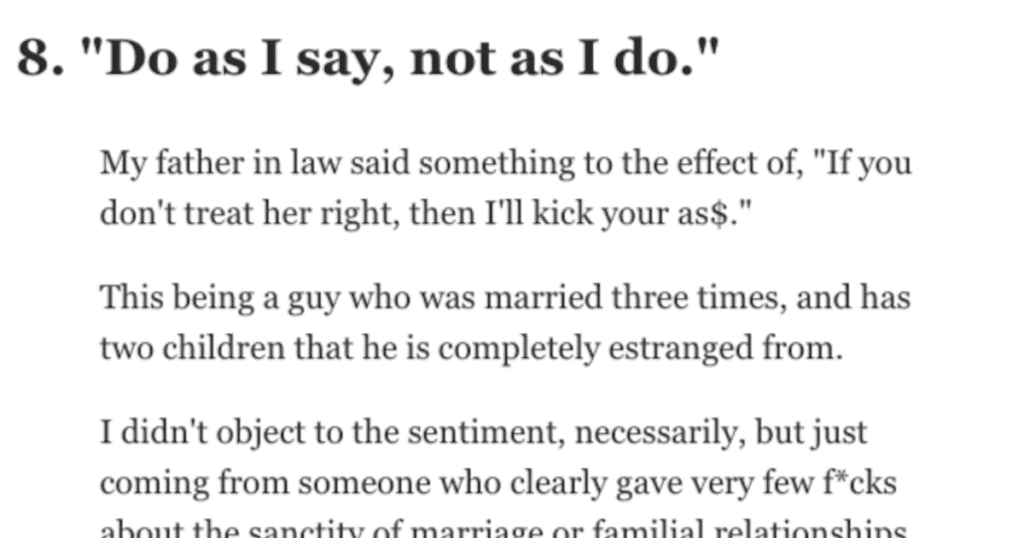 15 Men Share the Weirdest Marriage Advice They Ever Got

Even though I’ve never been married, or have even seriously discussed it with anyone, I’ve still somehow managed to get marriage advice. It’s as though it’s in the water supply. Everyone on the planet wants to tell you why you should, why you shouldn’t, what to expect, what to do, it’s exhausting.

I can only imagine how much that must amplify as you approach the alter itself.

There have been nearly two thousand replies, but here are just a few of the bits of advice received by men in particular:

“Don’t forget to work the cl*t, she’ll be a happy bride forever”

I miss the days when my grandma would only give gardening tips or baking tips.

Mom: Son, your sister and your Brother In Law use the rhythm method.

Me: You realize they have six kids, right?

Our father-in-law gave us this key like plaque thing with “remember the secret” engraved on it, and apparently gave us a good talking to at 1am.

We still have the plaque but no idea what the secret was.

I got “She’s your problem now. Good luck.”

Comparatively tame, but the “She’s always right” sentiment of a lot of older couples is insane.

Like, Donald, you spend 6 hours a day away from home because you can’t communicate with your wife and you refuse to actually treat your daughter like a person with her own thoughts.

Don’t pretend like your advice is worth jack sh*t.

One of my cousins got married when he was 30ish.

My aunt/his mom (one of the most awkward people I’ve ever met) decided the morning of his wedding was finally the time to explain how s*x worked and gave him some quack drops that were advertised to make his p*nis bigger.

She made the assumption that the drops were needed based on his dad/her ex-husband.

The cousins were never supposed to know about this, but his brother overheard and immediately texted all of us.

When I was dating my wife, a few months in I was working with her dad for some extra spending money.

I went to lift something and my Father in Law says “Careful with those nuts of yours. You’ll need those.”

I almost dropped what I was lifting.

My father in law said something to the effect of, “If you don’t treat her right, then I’ll kick your as$.”

This being a guy who was married three times, and has two children that he is completely estranged from.

I didn’t object to the sentiment, necessarily, but just coming from someone who clearly gave very few f*cks about the sanctity of marriage or familial relationships, it tickled me.

When I got married I asked my grandpa for advice since the man’s been married for like 6 decades.

He said, and I sh*t you not, “f*ck around every once in a while. It’ll keep things fresh.”

Needless to say I did not. Then again, we got divorced 3 years later so, maybe I should’ve heeded his advice. Not sure.

I don’t know if this is creepy to everyone, but it was creepy to me. An old uncle pulled me aside and said, “listen, I’m going to make your life very easy.

Just let her make all the decisions!” I was like f*ck that. I didn’t get married to be a doormat, or to have a doormat, for that matter, either.

I married a person.

Not necessarily creepy but bad advice. I was a virgin prior to getting married but one of my best friends advised me not to wear a condom because it “feels better” which was true but let’s just say being a virgin meant that I didn’t last long and my pull out game was quite weak.

Felt the consequences of that advice when I found out my wife was pregnant lol.

My dad drunkenly leaned in and said “men only want respect and women only want attention, then everyone’s happy, that’s all you need to know”.

But things took a turn when my mom cheated on him because he wasn’t “Paying attention to her. “ they promptly divorced. 26 years down the toilet, babyyy.

Not creepy, but the day after I got married I mentioned to my father that I was pleasantly surprised that my uncle had given us a check for a generous amount of money as a wedding present.

My dad said “don’t tell your wife, just keep it for yourself.”

“Don’t sh*t in her pillowcase for a laugh, it doesn’t go down as well as you might think.”

My grandmother pulled us aside and said, “kids, everyone is going to ‘give you advice’ about how to be a married couple. Smile. Nod. Say, ‘Thank you, so much!” Then, go right ahead and do whatever in the hell you were going to do.”

My wife and I (had been loving together 8 years at this point) looked at each other, then we looked at her, smiled, nodded, and replied, “Thank you, so much!”

She just laughed and hugged us.

I really miss her.

I couldn’t have said it better myself, Grandma. 🙂