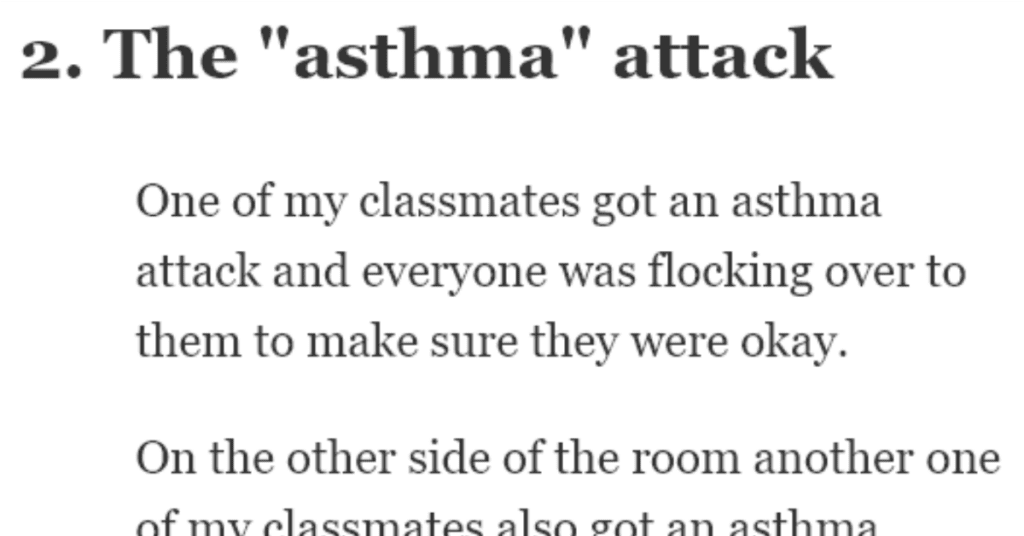 15 of the Weirdest Things People Faked for Attention

We all need a little attention sometimes. But how far are we willing to go?

For some, the answer is clear: WHATEVER. IT. TAKES.

What was the weirdest thing you’ve seen someone fake for attention? from AskReddit

My grandmother faked a heart attack because she and my dad got into an argument at Thanksgiving.

Grandfather was so embarrassed.

One of my classmates got an asthma attack and everyone was flocking over to them to make sure they were okay.

On the other side of the room another one of my classmates also got an asthma attack, even though it was common knowledge that she didn’t have asthma (there were very few people in class that had asthma and we all knew just in case it was an emergency). They faked the hard breathing and exaggerated gasps.

It was weird that someone would do something like that just so they would have attention.

One of my friends friends pretending to be hallucinating.

She even had the nerve to ask me “how long do hallucinations last?”.

She was doing it to see how her boyfriend would react.

A girl in my class faked a seizure after someone got injured in baseball practice, she loved the attention.

Being possessed by the devil.

He would ask people to hit or slap them to prove that it didn’t hurt him as if that proved he was possessed.

This went on for like 3 months until he got bored and just started acting normal again.

6. The center of attention

There was this one dude, Jake, hated it when the attention wasn’t on him.

This was roughly 12 years ago but once after a party ended he was deemed too drunk (he had a beer and 2 shots of sour pucker liquor) he stayed the night them pretended to sleep and that he was a soldier during nam and was running all over the place with his eyes closed.

One of his buddies ended up tossing a bucket of water on Jake but that didn’t wake him up. That same buddy tackled Jake before he ran outside to make a scene and that magically woke him up.

Whenever there were get togethers he would saying he’s gonna hurt himself when people weren’t interacting with him.

People stopped paying attention cause he would say it every single time and when he realized it he’d start throwing a tantrum that everyone hates him and that he has no friends so no one would care.

I responded, “the police will care. Let me call them” he stopped that act real quick

In high school I had a toxic, controlling friend. She once set me up with this classmate of ours, essentially pushing for it to make us both just feel cornered.

A week or so later, he breaks up with me (didn’t really give a s**t, really) and then not quite 12 hours later, she calls me and confesses that he loved her all along and how guilty she felt but this is the man for her.

She’s just going on and on. His sisters are supposedly pressuring him to confess that he’s gay but he denies it, says he and my friend have s** all the time. So she runs with it, allowing this ongoing lie that they’re having all this s**, they’re so in love, just really laying it on thick.

Dude later comes out as gay and they were both still virgins. I just don’t get the point? She further ruined a s**tty friendship for a guy that was gay. But for what? People are f**king weird.

A girl said to me she has cancer 3 days after I rejected her proposal.

I still didn’t accept her in my head I was feeling terrible that I am such a bad person but 2 days after that she said she got cured.

So either I am crazy or there must be some fastass super effective chemotherapy out there.

A chick I went to high school with always faked pregnancies, did this multiple times.

It got to a point where she stole her sisters ultrasound pictures and posted it everywhere… Her sister ended up calling her out on her bs.

Then she claimed she had a miscarriage..which she also lied about multiple times.

I was in an argument with a girl in elementary school and she was being antagonistic.

She picked a scab and squeezed it until it started bleeding. She started crying as if I’d hurt her.

I’m an aerial instructor, some of my students are young girls, between 9 and 14 yo..

One of them once said she broke her back and she wouldn’t be able to climb on the silks.

Then she spent several minutes crawling on the floor asking for help.

She had absolutely nothing, she always does that kind of thins the get attention

A pupil with a grudge against a teacher at my school deliberately broke his own finger by slamming a locker door on it and then accused the teacher of slamming his finger in a door in a fit of anger, just to get him into trouble.

Of course, the problem was it was his index finger and he could not have had it so badly damaged without severely bruising/cutting/breaking the fingers on either side.

we had a girl fake asthma (for years, she then became a smoker so), a couple faked mental health s**t like anxiety, depression, panic attacks and tics.

My personal favorite is this one guy faked having a record label sign him even though he was 12 and he would leave class on fake phone calls with his “producers” lol.

A friend of my classmate faked her death once.

My classmate went on for five years believing that her friend was dead.

Turns out, the girl was just in prison.

Her grandparents (who she had been living with her whole life) told everyone that the girl had died and everyone believed it.

They even had a fake funeral for her. I don’t know much about it, but that’s what I do know.

In second grade this girl everyone loved said her sister threw a plastic headband at her and it scratched out her eyeball, so she had to go to the ER and they dug through a bucket full of donated eyeballs to find one that matched her iris color.

However lonely you get, try to never be this person.