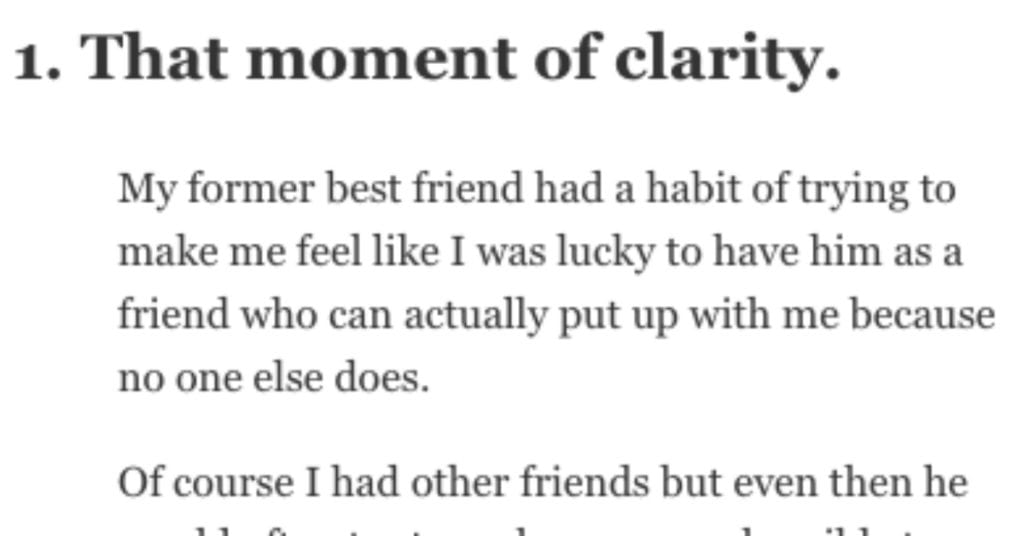 15 People Share the Last Straw in One of Their Friendships

In many ways, friendships are harder to lose than romantic relationships. We sort of expect the latter to fail, but the former we look forward to having throughout our lives.

The truth is that not everyone in our lives is there to stay, though, and sometimes – like in these 15 situations – we’re the ones who just have to call it quits.

15. So many friendships died this way.

She kept peddling an MLM and I told her multiple times it was a bad idea.

She got her feelings hurt when I told her the bald faced truth about it, and I told her she can talk to me when she runs out of friends and family to sell makeup to.

14. I think that would do it for anyone.

The guitarist for the band I had been in for five years, had befriended a sh%t head. A big time hard core druggie. No biggie. Until after a show one night.

We go out for drinks. My wife, her friend, a couple of us. We all have one or two and get ready to leave. Her friend, the druggie, and a buddy stay for one more.

Wife’s friend doesn’t show up to work the next day. Call around, she’s not home, not at work. Find out she’s in the hospital in a coma.

Druggie put GHB in her drink, drank himself real drunk and tried to drive her to his house while she was OUT in the back seat. He wrapped his car around a electric box. She cracked her skull open. 2 plates put in and she eventually woke up.

Investigation and convicted of drugging her and driving drunk. Dude does 6 months in county. Flash forward a couple years.

Wife’s friend comes to visit for her birthday. Guitarist who was NOT INVITED, brings the druggie to the birthday dinner. I almost laid him out, out front after he yelled “he did 6 months, what else do you want!!!!”

I especially dont want you to bring that a$shole to her birthday dinner.

F%ck that guy, f%ck the other guy, never spoke to them again. Both those guys can rot in hell.

High school besties boyfriend at the time sexually assaulted me.

She took his side.

I’m a happily married woman. A female friend, who’d recently left her husband for another man, invited me to her house for dinner. Cool, sure, sounds great.

She said there would be a surprise waiting for me. Without much prompting, she said she’d arranged for a male friend to join us. ”You know, you really need to loosen up and have an affair.” Yeah, that’s a hard pass for me. We never talked again.

I didn’t see her that week, and for the first time in months I didn’t have a panic attack that week. So I went another week without seeing her and low and behold, no panic attacks.

It made me really reflect on our friendship and recognize how toxic it was and how much it stressed me out. That was when I finally started to see how manipulative she was and how she was always subtly putting me down.

I cut things off and all of a sudden my mental health improved dramatically and I almost completely stopped having panic attacks.

10. Sometimes it hits you like a ton of bricks.

When I didn’t recognize the person I was talking to anymore.

“Friend” who was friendly with me when I ranked first in the tests, and then cut me off when I became second after another guy coming into the class.

8. What a nightmare of a person.

My husband’s best friend‘s wife. I attempted to be friendly with her and welcome her into our group when no one else seemed keen on it. She then proceeded to go around saying how desperate I was to be her friend and that I was a loser.

She then constantly proceeded to taunt and put down every social media post I made, and when I asked her about it, she told me to “stop my yapping”.

Guess who needs a job now and is not getting any help from the yapper.

I had a “best” friend from first grade through to the beginning of our senior year. She used to always criticize any ideas I had, what I wore, how I thought (she was super “religious”, I wasn’t). I stupidly put up with it because I thought she might see things differently and know what’s best. She would also get super jealous and knock me down because I ended up being better at certain things.

She always talked shit about other people she would hang out with (I wasn’t allowed to hang out with anyone else but her and her friend group) to me.

The final straw was when I found out by a different (real) friend, she would talk shit about me and everything I’d do to everyone else at school/outside of school.

I stopped talking to her midway through senior year and hung out with the other friend and her friend group. I was instantly happier and less stressed.

To this day I found out (small town living, yay) she still talked shit to others and made up rumors about me when I moved out with my ex after high school (because I wasn’t married and that’s a sin), and she’s currently doing that right now “but it’s ok because since she’s religious god understands”.

Sorry to go on a rant, the older I get the more I realize how toxic she is/was.

6. I think this was an episode of Seinfeld.

This dude was a habitual liar. Lied about everything, even stuff he didn’t need to. Things like what his favorite drink at Starbucks was. Everything. Eventually he lied about having cancer.

I thought he wouldn’t lie about that, I was wrong. I grieved for my friend. Turns out that he was not above lying about cancer. I wasn’t going to let my grieving be for nothing either.

I had a friend who would constantly make fun of the town I grew up in, my education, my job, and the way I dressed, among other things.

I always just thought “well friends rib each other” but the last straw was when he made a fake twitter account of me saying I grew up “in da hood” and tweeting how I’ll be a “virgin for life.” It was just in low taste and it helped me realize that true friends draw the line somewhere.

Always had money for weed, but always complaining about not having enough money to pay rent. Also, couldn’t hold down a job for more than 2 weeks.

It’d go from being the best job in the f%cking world to everyone is out to get me, and then “F%CK YOU ALL I QUIT!”

3. This story just hurts my heart.

Growing up out in rural Nebraska and being.. not exactly white.. had its challenges, but I always had a good group of friends. One in particular had been my absolute best friend since 3rd grade. We went to a small country school until 8th grade.

When I say small, my 8th grade class consisted of me and 3 others, one being the aforementioned best friend. Then came high school, and i got my first real taste of how viciously racist my peers could be, especially freshman year.

My best friend basically abandoned me to deal with it on my own, I guess maintaining his own rep was more important, but whatever, still I managed to make a lot of friends and even those who, were in all honesty just being asshole kids with no real malicious intent became friends after they got to know me. But my “best friend” was a different story.

I actually gained a bit of popularity and was generally well liked by all, even though some would still flip me shit for having some darkness. He, however, was socially awkward and had few friends. I always tried to include him, but I could tell something was off. One day out of nowhere, while we were all bullshitting between classes, he just up and calls me a dumb n****r in front of everyone.

Now, by this point (2 or 3 years into high school) I was used to racist shit from other people, but fuck it hurt extra coming from him. That was it. I didnt say another word to him, just walked away while he just kinda quietly laughed to himself. My best friend for almost a decade.

Had a college friend, we call “buddy” to each other and literally went through all those college life stuffs together. But in this friendship, I’m usually the one listening and asking questions and she’s the one getting to talk only about herself. It’s my personality to be such so I was okay.

Until a few years later, we went to different countries far apart, and she run into some issues at work, got into depression. Still, I got her back and offered comfort and help as much as I can. Then she stopped reading my messages, for months, so I stopped sending message thinking I might look pushy.

After a week or so, I saw her social media account, with all our mutual friends there, talking how bad of a friend I was for “abandoning” her. A long speech about me. She even mistook that I blocked her (actually i just changed my name so she might have not recognized that). But like wtf. Even if I stopped messaging her (because she wasn’t responding anyway), I would check on her social media updates all the time, I would think of her all the time. If I had a means to I’d hop on the plane and get to her. And yet she talked as if someone I dont know. But that’s not the last straw yet.

I messaged her immediately, apologized for the feelings she had, and asked politely if we can talk. I got ignored again, but at least she took down her post. I messaged her again and made her throwback video posts on her birthday. Nothing but a cold whiff. And then my birthday came around and I didn’t hear from her even a single thing. That’s it. That’s the last, slowly burning straw. I have no regrets.

1. That moment of clarity.

My former best friend had a habit of trying to make me feel like I was lucky to have him as a friend who can actually put up with me because no one else does.

So anyway I became friends with someone and of course he didn’t like that and started being passive aggressive to her, naturally I asked him what was wrong and he went on this long rant about what a horrible person I was and how I probably don’t even like my new friend as a person or something like that so I was like f%ck it, why do I put up with this shit and blocked him on everything while avoiding talking to him in real life

This happened to me once when a girl I’d just started hanging out with answered a call in the movie theater. What even.

Tell me you story – I want to hear it!