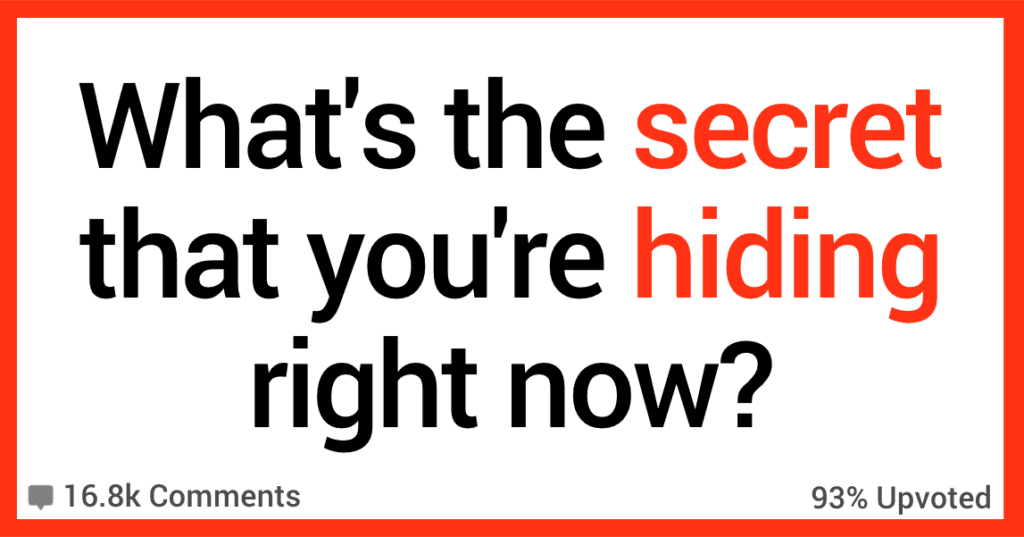 In this life, we live and learn. Sometimes the lessons come from a well-heeded piece of advice, sometimes from an injury sustained.

And sometimes, we learn our lessons through the weird little experiences we date not tell anyone about.

That is, unless that person is a stranger on the internet. Like this one, who posted the following question to r/AskReddit:

What is the most disgusting secret you’re hiding right now? from AskReddit

Here are some of the weirdest answers, and what we can learn from them. (Spoilers, a lot of them are about poop for some reason.)

1. Careful where you aim.

One morning i couldnt be bothered making my breakfast AND a coffee, so i added instant coffee to my cereal, mixed it into the milk and ate coffee cereal

That I am sat in my office at work, surrounded by a team of socially distanced staff, and I’ve just sh*rted

4. What is hidden will be uncovered.

In biology class we were dissecting a pigs eyeball and my hand slipped and the eyeball fell on the floor and me being extremely lazy I kicked it under a cabinet and it lay there for 2 years until someone finally found it.

5. You choose your legacy.

I drew a massive penis on the ceiling in my art classroom probably a metre long and its been there for years, i asked friends who have brothers and sisters there and they say its still there.

After prom I had a party at my parents cabin just outside of town. Later that night I found my boyfriend having sex in my car with my volleyball co-captain.

I didn’t confront them but instead went to his car (which was only 2 or 3 weeks old) and took a sh*t in the passenger seat.

I wiped with some napkins he had in the glove box and put them in his cup holders.

I went back inside and kept drinking.

7. Get that crap away from you.

As a teenager I was abroad with my class. I shared a room with two other girls.

One morning I went to the toilet and take a dump. I was shocked as I saw that the toilet flushing was not strong enough to wash it away.

I panicked. So I grabbed it with toilet paper, wrapped it around and throw it as far a I could out of the window.

I once found a chocolate bar in a trash can when I was waiting at the bus stop… I ate it.

9. A fool and his money are soon parted.

I spent money on Boom Beach, that shitty mobile game.

I tried to smoke a cigarette with my *ss .. a friend helped me put it there .. it didn’t work

11. You can have your cake and eat it too, but at what cost?

Last week I said I was going out for a drive to clear my head but I actually just bought a cheesecake and ate the whole thing in the car.

first time i jacked off was in the epcot ball :/

My vegan cousin just celebrated her 5th year of veganism for moral reasons.

Two Christmases ago I was in charge of putting together vegan posole for her and I put chicken bouillon in it on accident and I’m gonna carry that secret with me forever.

I’m in a meeting with a large defense contractor wearing absolutely nothing.

I love working from home.

15. If you see something, say something.

Remember to always be willing to learn from your mistakes. Even if they’re super duper weird ones you’re surprised you made in the first place.

What secret are YOU carrying around?

Unburden yourself in the comments.