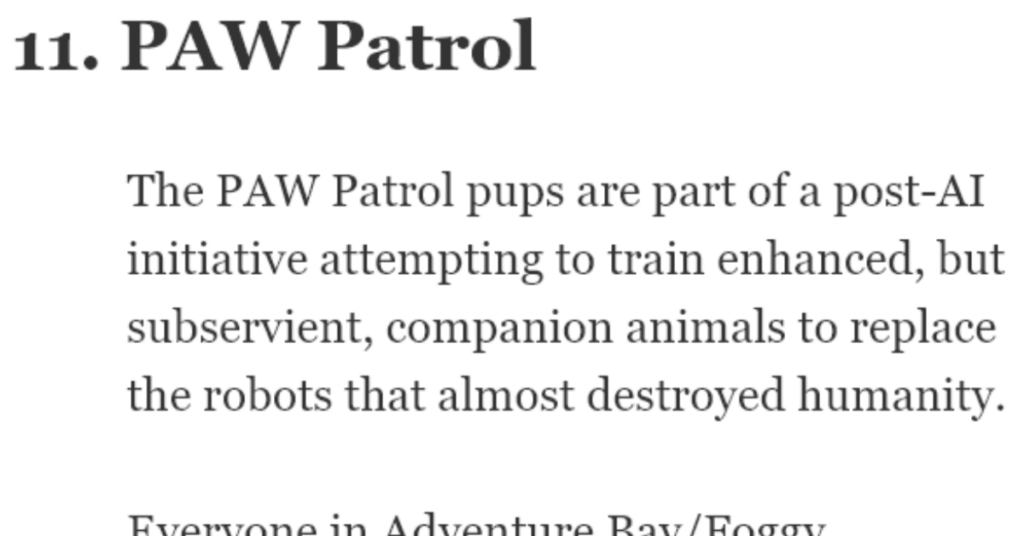 If you’ve never been involved in the writing of scripts – I’ll let you in on a little secret:

There’s almost never a grand plan from the outset while constructing a narrative. It all comes together in pieces. And usually, the background details are largely ignored.

Which is why it’s so interesting to watch fans pick up the pieces and form background details that, most likely, the writers themselves absolutely never intended.

What fan theory do you 100% accept as true? from AskReddit

1. Star Wars: The Empire Strikes Back

Admiral Ozzel is a rebel spy.

Everything Ozzel does in his brief bits of screen time is to the detriment of the Empire. When the probe Droid finds the rebel shield generator, Ozzel tries to dismiss it as smugglers before Piet speaks out of turn and gets Vader involved. Later, Ozzel orders the fleet out of hyperspace too quickly, giving the rebels plenty of time to activate the aforementioned shield generator that Ozzel knew about.

“Clumsy as he is stupid” or Rebel sympathizer who gave is life to give the Alliance as much time to evacuate their base as possible? I side on the latter.

That Loki was controlled by the tesseract more than he let on.

His eyes glowed multiple times and he shed a tear when Thor tried to talk sense into him.

in the final two parter of Capaldi’s run on doctor who Missy makes a joke that the doctor’s real name is Doctor Who.

this isn’t a joke and Missy is being truthful. The Doctor originally called himself Doctor Who but got embarrassed by it later in life shortening it to “The Doctor” to sound better.

The Jetsons and the Flintstones are living at the same time in a dystopian future where the ‘haves’ live above the clouds and the ‘have nots’ are stuck on a wasted Earth.

The signs include that Flintstones celebrate things like Christmas and other holidays which doesn’t make sense and The Great Gazoo alien appears in both series.

James Bond’s primary purpose is to be a distraction to keep attention off the spies who actually spy.

Villains and other spies know him, he rarely takes an alias, he makes his presence known early on and keeps messing up operations for the villains, but other spies have already infiltrated their ranks and work while Bond does as much visible damage as possible to keep the others safe.

The monsters in Courage the Cowardly Dog are regular people but seem monstrous from Courage’s perspective (since he’s cowardly).

Also they live in the middle of nowhere because his owners never take him out so that’s how he views the world.

The “real world” in the Matrix movies is just another layer of the Matrix, designed specifically to appeal to people unwilling to conform to the normal Matrix. Humans in this outer Matrix have confirmation of their belief that something was wrong, and get to indulge in the fantasy of being a heroic freedom fighter against the faceless evil machines, thus choosing to accept this false reality.

The anomaly of the One is that he’s capable of rejecting both realities, which is the reason why he had powers in the real world.

I 100% believe the two men accompanying the woman in the original “Blair Witch Project” planned and successfully executed a plan to murder her while they were deep in the woods. Too many factors point to good old fashion murder than a supernatural occurrence.

That the book Rory writes in the Gilmore Girls revival is the original show – that explains why the characters are so different from the show vs revival miniseries.

She’s looking back at the past with rose colored glasses

My own theory that in The Office when Andy proposes to Angela the people playing his parents are different actors because they are literally actors. As in he hired them to pose as his “perfect parents” because his own parents couldn’t be bothered to come.

The people in the season 9 episode Garden Party are his real parents, who clearly are d**ks.

The PAW Patrol pups are part of a post-AI initiative attempting to train enhanced, but subservient, companion animals to replace the robots that almost destroyed humanity.

Everyone in Adventure Bay/Foggy Bottom/Etc are paid actors who place the pups in coordinated training exercises. Which is why Mayor Humdinger gets away with all his bulls**t.

Parenthood has melted my brain.

The movies and games all have different narrators and different takes on Max because they’re all stories being told by people in the wasteland.

All of these great deeds and accomplishments are being attributed to one man who may or may not have ever really existed.

Barney from How I Met Your Mother isn’t actually as much of a womanizer as Ted says he is. Ted’s an unreliable narrator and could’ve presented this image of Barney to his kids either because he was jealous of Barney’s relationship with Robin, or because he wants Barney to look unsuitable for her.

This is 100% my own theory, but it makes sense. Never hear of any students getting pregnant, and it’s a co-ed school where kids spend most of the year together…

Magic or not, kids are idiots and will f**k up any sort of birth control, even if its a simple wave of a wand. SO I think the founders built it into the school wards. No one can get pregnant on school grounds.

Avatar the last Airbender takes place on a much smaller planet with lower gravity.

This is why all of the characters can jump double/triple their height and fall multiple stories without grievous injuries.

I think the simpler explanation for some of these is just “the writers didn’t think that through,” but y’all are more fun.