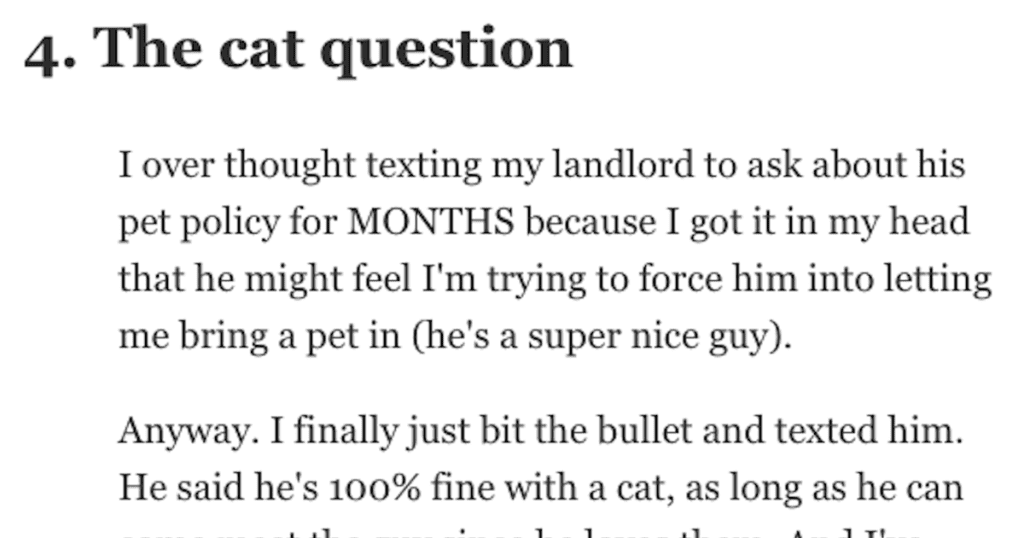 It frustrates me to no end that our brains, which are supposed to help us navigate the world around us, instead turn into these overactive simulation machines just running through every single possible bad thing over and over even though nobody asked them to do that.

In other words, I’m definitely an overthinker.

If you are too, then you’ll probably identify with these things that other of Reddit folks can’t get off their minds.

I don’t have the energy to do anything today. So I’ve been feeling guilty of that, because obviously I’m wasting away my whole life when I spent an hour laying on the bed watching YouTube videos.

Oh and I spent the entire morning cleaning my home because my parents visited for an hour.

I’m going to swing by a wake, husband of a new girl at work died suddenly. I barely know her, and I didn’t know him, but it’s incredibly sad and I wanted to go just to show some support, and I’ve been struggling with what I should wear.

It’s f**king stupid because it doesn’t matter much what I wear. I think it’s partly that I just hate going to wakes, and I’ve had to do it like 6 times in the past year.

How do I reply to this question? Is this good enough? Funny enough? Truthful enough? Original enough? Too long? Too short? Did I make any spelling mistakes? Punctuation!?

One space between sentences or two?

Maybe I should just upvote and move on. Who would want to read this anyways?

I over thought texting my landlord to ask about his pet policy for MONTHS because I got it in my head that he might feel I’m trying to force him into letting me bring a pet in (he’s a super nice guy).

Anyway. I finally just bit the bullet and texted him. He said he’s 100% fine with a cat, as long as he can come meet the guy since he loves them. And I’ve been wanting a cat. So it works out perfectly and I could have stopped stressing months ago.

In the span of a few hours after talking to my landlord I have found a cute little blank and white kitten and have him reserved to come home with me!

What if when i fell back asleep i just suddenly died?

What if this stuff im standing over falls on me and kills me?

If I have a heart attack at work, how long will it be until someone finds me? Who will pay my bills? Will my wife and kids be ok? Who will pay their bills?

Will anyone come to my funeral?

Will there even be a funeral?

I hate it here.

I woke up before everyone else in my house today.

First crippling thought: So much clutter, I really should reorganize the bookshelf.

Second crippling thought: (I still can’t stop thinking about this one) the ice maker overfilling.

Third crippling thought: the bottle of water on the edge of the table is… too close to the edge.

Went on the first date with a longtime friend, both admitted the connection and attraction and now here I am again overthinking Was he genuine about his feelings What if I did something on the date and he’s no longer interested

why tf is so hard for me to talk to this one specific girl, and like when I finally had something to talk to her about, my mind went blank and I think I made her more worried about her test than I wanted to. But like, it’s not hard to talk, I do it everyday, sometimes I don’t even need anything to talk about, I just do a face and make the other person laugh and they do a face, but then Herr, im literally just stuck thinking “wtf do I say” and like it’s not like I even have a chance, cause she has a bf.

So like yeah, idk wtf, and I feel like I over think every encounter but idk how to stop, I just freeze and turn around every single time

I an afraid im losing control.

I keep telling myself that my hard work will pay off but in the mean time it feels like I am losing some of my best friends.

can’t stop thinking about how big i f**ked up breaking up with my ex.

I’ve grown a lot since then, and I sent a handwritten letter yesterday apologizing and saying how if she gave me the chance, i’d be all in.

But every second I have to remind myself to let go of hope, and her, because in all probability she has already moved on.

We only had a couple conversations over a couple of weeks at church but we both seemed interested and I kept forgetting to ask for his number.

Anyway he popped up on my Instagram this week so I messaged him and now I’m worried I ruined things.

My brother in laws wife is very obsessed with babies in a very unhealthy way.

My wife’s preggo with twins. She has basically latched onto her.

Mine would be how to kindly tell her to leave us the f**k alone.

Whether I am a burden to friends who had to wait 10 minutes for me for an online meeting..

Yup, I can totally understand getting caught up in any of those.

What have you been overthinking lately?