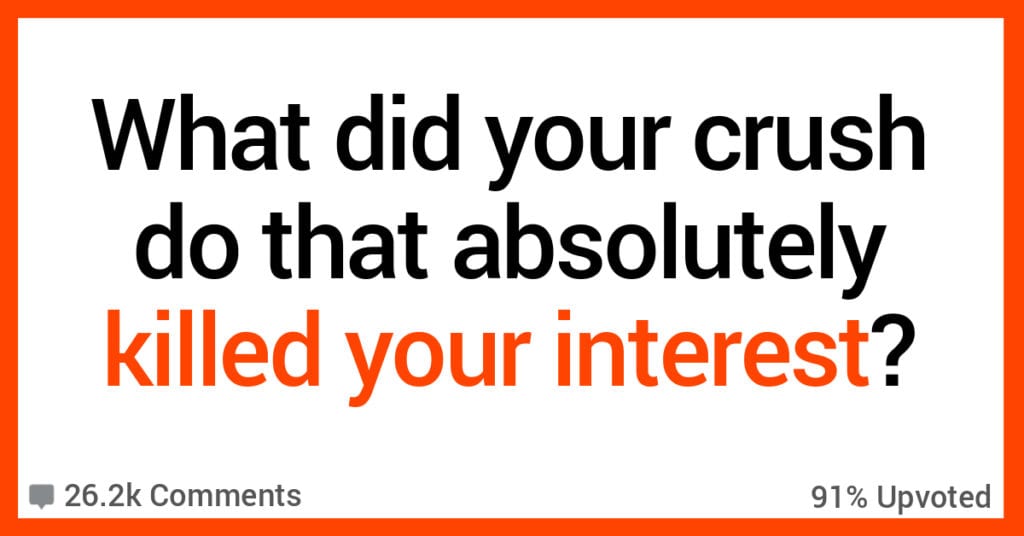 15 Times a Crush on a Guy Immediately Disappeared

Just because you’re a crush doesn’t mean you’re going to crush it.

It’s amazing how absolutely infatuated we can be with someone and then experience that all melt away as soon as they reveal something distasteful about themselves.

Take this collection of stories on Reddit, for instance.

What did your crush do that absolutely killed your interest? from AskReddit

There are over 26,000 comments so we can’t go over them all, but here are some of the best (worst?) ones about guys specifically.

1. There was this guy, who did NOT turn out to be a cheap date…

This was in college, we were acquaintances and had a few classes together. He was cute, funny, and I totally had a crush on him. He asked me out to dinner and a movie.

At the restaurant he ordered the most expensive things on the menu. Apps, drinks, lobster, and even dessert. When the bill came he said “You got this, right?”

I was so embarrassed I paid. Then I said I’d skip the movie because I wasn’t feeling well and he asked me to give him $20 for gas and for wasting his time.

I didn’t and just left. Ugh!! After that he couldn’t seem to understand why I didn’t want to go out with him again.

2. This rebel without a cause, or a brain…

Bragged about drinking and driving.

He told me that he and his friends have a “nothing under 100” club, where they drink and then drive on the interstate going 100+ mph and have to send a full-length snapchat video of the speedometer to each other.

Two of my friends had been killed by a drunk driver 3 months prior.

3. Any guy who uses the word “conquest” for sex should be avoided.

Revealed his list of conquests. “Not even my brother knows how many women I’ve slept with.”

Then he offered to take my virginity in the back of his pickup truck.

4. Talk about letting the cat out of the bag.

He talked about how he and his friends used to abuse farm cats.

They talked about one that was buried and then run over.

I did a quick 180 and absolutely hated him.

5. No kink-shaming, but you gotta communicate, dude.

He tried to discreetly take photos of my feet… Nothing against people who are into that, but the way he was going about it was super creepy.

6. When you’re addicted to pretending to be addicted.

We were teenagers, he lived in a different province, and we used to chat on skype. He wanted me to think he was a “bad*ss” or something and would always talk about his drug use.

He ended up faking a heroin overdose when we were on chat together. I was hysterically crying and freaking out thinking I was watching someone dying and was trying to figure out how to call 911 in another province when he “snapped out of it” and told me he was actually okay.

I didn’t talk to him much after that.

7. He shouldn’t just be off your list, he should be in prison.

His sister actually approached me and let me know that he was once arrested for locking their other pregnant sister in their basement, went on a coke binge while she desperately tried to get out, and went outside to beat their unsuspecting neighbors van with a golf club.

That was a big’ol nope.

Tried to convince me to quit my job and put all my savings into gold bars; then demanded I let him read my Tarot cards to see if we’d be a good fit.

10. This dude has got some serious hang-ups.

When I was a teenager we worked together as lifeguards. I adored him so much until one day he just starts talking about this random woman (that he didnt know and wasnt even there) that was wearing shorts.

He said he was fine until she sat down and had some cellulite on her thighs. And he kept being angry and talking about How she should be doing squats to be more appealing.

Like, his rant was angry and long and no one was adding to his conversation. Just silence.

After that I took off my rose colored glasses and saw that he was, in fact, a huge douchebag.

Blamed the world for all his problems.

Nothing was ever his fault.

12. When every single person around you is incompetent, you’re probably the problem.

We work together and as I got to know him more I learned he talked badly about everyone.

Nurses that are amazing he’d belittle, talk about how certain people don’t know what they’re doing because they asked for an ultrasound IV as they were struggling getting a vein on a heroin addict.

The paramedics were worthless, doctors don’t know what they’re doing, who he thought was hooking up and it completely turned me off.

He’s in his early 40s and into gossip more than my teenage daughter.

13. Talk about getting trashed…

He picked me up for our first date and his car was disgusting. Not talking a few trash items, the entire backseat and floorboard was completely covered in piled up trash, even up front.

I had to step on empty McDonald’s bags, old soda bottles, wrappers ect to even get in. And all he said was, just move it around with your feet. No sorry or anything.

Told me he liked dating broken girls so he could fix them.

I’m not sure what the moral to any of these stories is other than “Hey fellas…try not to be a train wreck.” Yeah, that seems right.