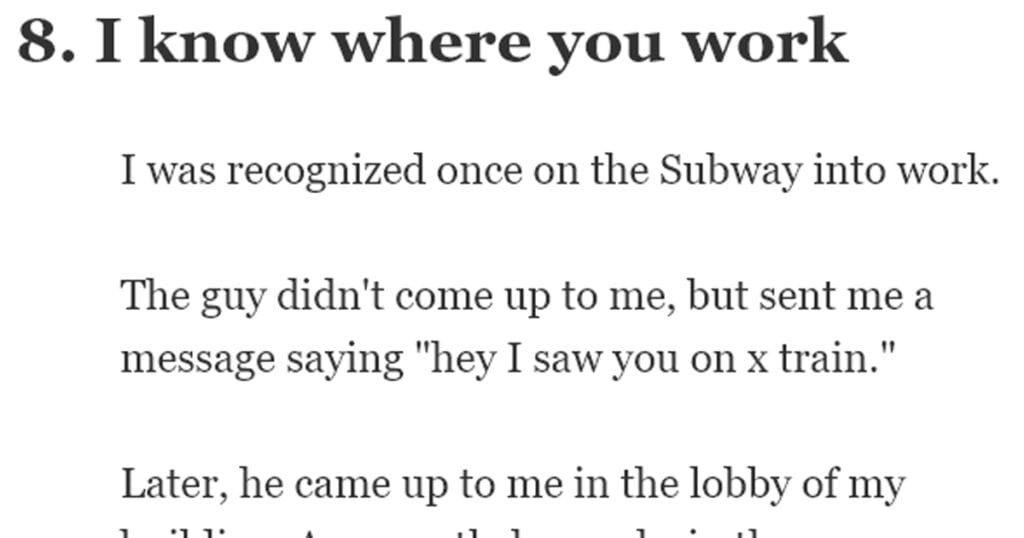 14 Times Adult Entertainers Ran Into their Fans in Real Life

People talk a lot about OnlyFans in sort of hushed or jokey tones, but the truth is this platform – whose bread and butter is adult content – is just an example of the latest iteration of a very old tradition: selling sexiness.

But of course, the creators behind the content are just people, and it might be a little odd when the folks who recognize you from your closed-off work are the same that recognize you in the grocery store.

People with OnlyFans, have you ever been randomly recognized in public? If so, what happened? from AskReddit

How does this type of thing tend to go? Let’s see what stories Reddit has to share.

I’ll add my story. But it wasn’t OF. I did post on Reddit for one year, I also made some friends via Kik.

Guess I gave out my town one day, because I started getting scary messages. He said I looked really good that day at the grocery store! Then he mentioned that I must love books since I visit the bookstore once a week. So that was the end of that! Blocked, scared out of my mind. I had my child with me every single time!!!! So getting noticed for nudes is a bit awkward, but being stalked was way worse!

Ps: I stopped going out for a few weeks and then I only went out with a group.

2. Wait, why is your attorney doing that?

I worked with a nurse who was a high level administrator and a bit of a hottie. Her husband was an attorney who helped set up p**n sites for one of his clients.

We were at a conference once and after a few drinks she admitted that her butt was a banner for several of the sites. I’d never been to them before but when I looked at it it sure looked the shape and color one would expect to be hers. Tame photo and just the one.

The next time we got drunk she told me the same story.

I have a facebook friend that I worked with at a fast food joint when we were teenagers.

I forgot all about her until she came across my feed with a post that was actually advertising her OF.

She is super open about it and posts semi explicit content to her fb page.

Not sure, but I saw a crush I had in high school on P**nHub awhile ago.

Surprised the h**l out of me, and i haven’t talked to her since she graduated (before I saw)

5. I think it’d be illegal to fire her over that, so

There’s a girl I work with the intentionally gives out her OF info where she works at.

She did it at her prior job as well.

I think it’s either to control the situation or for the added revenue stream.

But it spread like wild fire in a place that employs 1200 people, and I’m shocked she still works here.

Yes, once when I was visiting Dallas a guy came up to me and said he recognized me by the shirt I was wearing (I had wore the shirt in a public nudity shoot I did).

It was creepy because after he said hi, he followed me around the mall. I managed to lose him in a forever 21 lol.

I hope I never experience that again.

I had a guy recognize me, thankfully he was pretty chill.

He low key followed me for a bit, then split ways then sent me a message on OF saying he saw me. And that was it.

Half of my family know what I do (found out), but almost none of my friends.

8. I know where you work

I was recognized once on the Subway into work.

The guy didn’t come up to me, but sent me a message saying “hey I saw you on x train.”

Later, he came up to me in the lobby of my building. Apparently he works in the same building.

TBH it freaked me out a lot but thankfully nothing bad ever came of it.

No, not in public. But I did have a fan tip me and say “hey insert my real name I know you from work”.

It freaked me out a bit since I don’t tell many irl people about it and it could have been a creep, but it turned out to be a cool guy I actually had a crush on haha!

Recently in my day job I had a new client who I was having Zoom meetings with and she was adamant she knew my voice. She keeps bringing it up every week, asking if I have done radio, podcasts, V.O. work. She keeps joking she will get to the bottom of the mystery somehow.

After she brought this up I checked my Patreon subs and she subscribed to me 9 months ago with her work email.

I honestly am just waiting for the penny to drop.

I saw an Snapchat/Instagram model I follow at Trader Joes who I only recognized due to her gigantic, amazing a** and then her voice.

I knew she lived near me, so it wasn’t totally out of the realm of possibility that I could have seen her.

I messaged her on Snapchat later and she confirmed she had been there that day. She liked hearing that her a** was recognizable

I’m on another camming site.

Not in public but on Grindr once a guy that was 3 miles away recognized me and said he saw my show.

Offered to give me a laptop actually.

13. The past follows you around

Not me but a coworker.

Apparently while this coworker was in nursing school she did hard-core p**n prior. A couple of male paramedic/firefighters recognized her and it quickly got around the ER that she was a p**nstar.

She had a fake name and people were sharing it. This nurse was mortified and I may have been one of the only select few who didn’t treat her differently after this.

Well it got back to my family and other people in the small town I’m from. It’s still hard to be seen in public there and my family disowned me for a number of years due to the shame and embarrassment.

All because I was struggling to make ends meet.

If you recognize someone like this, PLEASE just don’t be a creep. Remember, it’s just a job. Enjoy the work, leave the human alone.