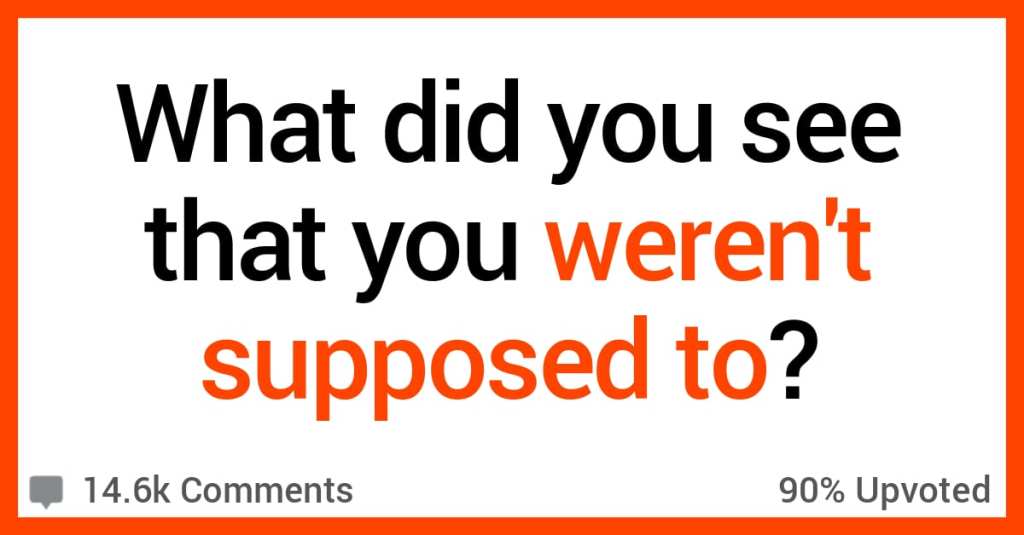 One time I did that mistake where I meant to text ABOUT someone, but I accidentally sent the text TO that person, and they read it, and it was really awkward.

But that sort of “wrong eyes on this” experience is absolutely nothing compared to the ones in the comments of this Reddit thread by BK_2_times:

What’s something you saw that you weren’t definitely supposed to see? from AskReddit

Fair warning: a lot of this is pretty graphic.

A text from my wife to someone else, “I can’t wait to feel every inch of you deep inside me.”

i was a nosy child and i was looking through my grandmother’s address/phone number book. she had little post-its tucked in random places.

i came across a note that was a list of things she wanted to do to be happy and one of them was “find a man that loves me.”

my grandfather had died a while back, probably eight years previous.

it didn’t make me sad then but it really does now because she has dementia and can’t remember things that happened a few seconds ago.

I was living with my girlfriend and her parents.

One day I run down the stairs real quick to use the bathroom to see her parents getting down and dirty under the blanket on the couch.. at this point it was too late to turn around so I just ran past them.

In the seventh grade I was walking out of the locker room. I heard the girl’s locker room door open, and me being a human responded at a sudden noise and looked over to see one of the girls walk out.

We make normal human eye contact. At this point everything is normal, but in the corner of my eye, I was somehow at a perfect angle to see one of my classmates with her pants down.

Needless to say I worked hard to consciously not look in that direction again.

I needed a USB drive at work one day, and asked one of my coworkers if I could borrow one.

Living out in the country, when I was 10 years old, my parents went to the local video rental place and brought back a few VHS.

They told me to pop in Planet of the Apes. I did and whoever had it before didn’t rewind it and it started mid video…and all you heard was moaning and all I saw was an eyeful of d*ck and vagina.

And I stared glued to the TV, and my parents freaked out and ran to turn off the tv.

Apparently the small video rental store back then doubled as an adult video store as well and somehow they accidentally grabbed a copy of Playmate of the Apes by accident.

She had a small note pad that she kept in her dresser drawer. It had her planning on trying to make it look like a accident so my dad could collect the insurance money.

She almost even went through with it one day but from my understanding my brother unexpectedly came home early from either school or a friend’s and she didn’t go through with it.

My mom and her male “friend” f*cking in our barn when I was 9 yrs old.

After that our parents divorced and never spoke with each other again.

After he passed away in the hospital, I went straight to his room and purged it.

Borrowed my (now ex) husband’s laptop one evening while I was at home and he was out with his friends. Browser was open to his gmail account, including an ongoing gchat with his mistress. He must have been chatting with her from his phone, because their convo continued on the screen as I looked on in horror.

I scrolled back through the previous several weeks of their chat. He mentioned having a wife. He sent her d*ck pics….SO MANY d*ck pics. He gushed over his feelings for her, but she mostly seemed to want to hit him up for money.

It was horrifying, of course. But also a terribly sad look into that douchebag’s inner life. Divorced now, thankfully. Good riddance to bad rubbish!

When I was younger I was at a friends house sleeping over playing video games on the n64.

We wanted a late night snack and went downstairs to get some cookies and we saw his mum with another man kissing (wasn’t sure if it got to the other point) on the lounge as he cried and said “you’re not my dad” and sadly this was the last time I spoke to him because he had to move away with his father.

Just a couple days ago, I was trying to find the power supply of a monitor I haven’t used in a couple months.

My brother and I were very curious children..

One day he pulled me into our spare bathroom all excited because he had found a “huge surprise” in the garbage can beside the toilet. Inside the garbage can there was a tortilla chip bag with a whole bunch of rolled up things inside…

We opened it up thinking that they were surprise toys (like kinder surprise) left inside the bag by accident. Nope, they were my mom’s bloody pads.

Ok, I’m gonna go wash my brain out with soap.