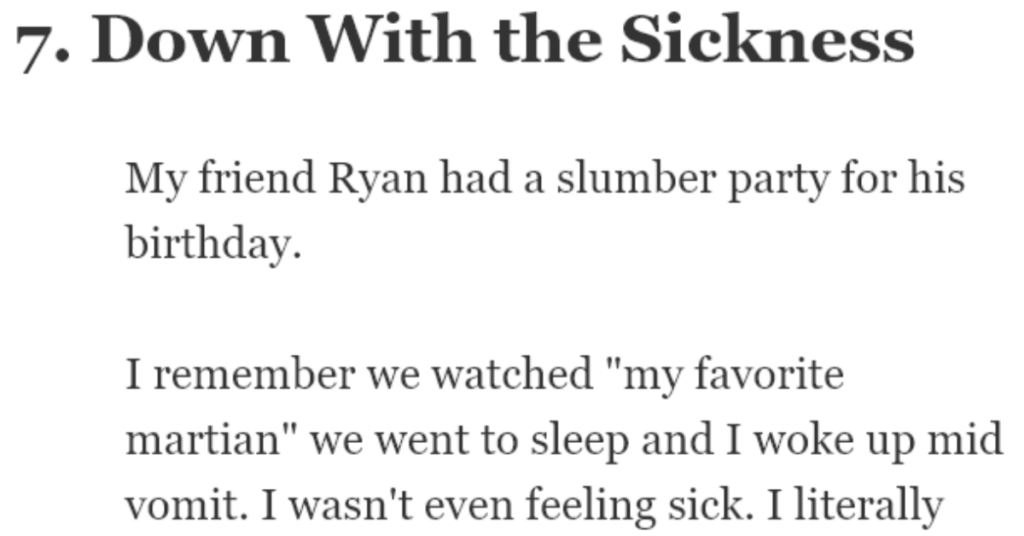 Most of my sleepover memories involve a lot of N64, watching movies I’m not supposed to watch, and drinking enough soda to make your brain hurt.

But not everyone’s memories are quite so rosey.

What was your worst sleepover experience during your childhood? from AskReddit

Warning: some of these tales from Reddit get into VERY serious and dark territory. Reader discretion advised.

My friends older brother(22m) had a gun out.. me(8m) and my friend(8m) were playing Nintendo.

The 22m thought it would be funny to scare us so he pointed the gun at us, we screamed and said to stop, he laughed and said it wasn’t loaded, pointed it at my friend and pulled the trigger, shot him in the face from point blank range and killed him.

I have nightmares still about it. Im now 40.

Went to a girl’s sleepover where there were three of us. The girl’s dad put an audio recorder under the teddies on top of her cupboard when he came in to hand them out. Would have been about 8 years old? We were talking about crushes at school and such.

Next day he played the recording out loud to wake us up, laughing and listening closely to what we were talking about, in front of us. They moved away eventually. 14 years later the girl messages me and asks if I remember anything weird happening at that sleep over.

I told her what I remembered and it turned out she was being s**ually abused by him.

Friends mother and her boyfriend were arguing in the kitchen after we went to bed, he started talking about how he would “kill the kids if I have to”

I was about 7 or 8 I guess, so it didn’t really sink in that much at the time, but my friend wasn’t really in a great mood for the rest of the time I was there.

Think it was around grade 3 or 4, I had a best friend with a big house and two parents who later divorced a couple years after. I’ll say his dad was a HUGE garage dad. As in the guy had his own brand new fishing boat he cleaned every day in there, all his trophies, life relics, everything was in there. The floor of the garage was nicely carpeted, and legit everything in there was spotless. Anytime I went over, his dad spent most of his waking hours in that garage.

My friend, his brother and I somehow got into a “water battle” with the garden hose / super soakers. I can’t really remember how or why it started but as you can guess, we moved our “battle” into the garage and left the garden hose running inside. We must’ve left it running from lunch time, and his dad didn’t come home until 5 or 6.

I’ll never forget the absolute hysterical screams and wails my friend and his brother made to their mom, who was closing her eyes crying, begging for her to do something while their dad was dragging them into that garage. The screams and yelling from the dad inside the garage continued for the entire hour it took for my parents to pick me up. They were beaten so bad, I don’t think my friend could sit down for a solid week.

I stayed over at my elementary best friends almost every week. Their grandmother lived with them and everyone treated her like a burden. They told me she was crazy and mean but she was always very kind to me and because I was raised to be nice to my elders, I was kind in return.

One day, when my friend had to go talk to her mom about something the grandma asked me into her room. I had never been in there and it was decorated completely differently, I could tell she had moved an entire house worth of stuff into one bedroom.

I can’t remember the whole conversation but basically she said I was kind and she really loved talking to me every week, and that her family didn’t really let her talk. She gave me a little metal Noah’s ark bracelet but asked me to hide it from the family.

I was scared to wear the bracelet because I didn’t want my friend to get mad and every time i looked at it, it made me so sad for Nana.

Had my first ever sleepover with my best friend in the first grade. Things at night were awesome. When I woke up the next morning everyone at his house was super distant, and they called my mom to get rid of my asap.

His father had an aneurysm that night and passed away.

After everything settled he and his mom moved away and I never saw them again.

7. Down With the Sickness

My friend Ryan had a slumber party for his birthday.

I remember we watched “my favorite martian” we went to sleep and I woke up mid vomit. I wasn’t even feeling sick. I literally woke up throwing up at 5 in the morning.

They took me home, I slept in till noon.. and I remember thinking I wasted a whole day because I had never slept in that late before.

I was invited to a birthday party in elementary. Everybody kept talking about the slumber party afterwards.

I assumed I was also invited to the slumber party, so I brought my sleeping bag and pajamas. Turns out, nobody actually wanted me there. I cried in the hosts room alone for an hour or so, then faked being sick and had my grandma come pick me up.

When I was like 14(?) I was at a big group sleepover with my friends. The mother of the girl who was hosting it was really strict about health and she told us that we couldn’t order any pizza until we’d eaten the massive fruit platter she’d prepared for us.

No one was touching the platter other than taking a few pieces to snack on. It was getting late, the pizza place would be closing soon and her mum was not budging about her rule. Someone needed to step up. That someone was me.

I started absolutely devouring the fruit platter, shoving pieces into my mouth and swallowing them without chewing. This was a platter for like eight people, but I was a woman on a mission.

We did end up getting pizza, but I got so sick I spent most of the night throwing up in the toilet. I couldn’t even enjoy the pizza cause I was so full

Girls sleep over when I was in elementary for a friend’s birthday. Had a great time laughing and telling scary stories before bed.

Woke up the next morning with a fever and terrible nausea. Went home and I was only getting worse. I had a huge spot on my leg in-between my ankle and knee, right in the middle. It was hot, puffy, and red.

Went to the hospital and it turns out I was suffering from a really bad staph infection. The night before, we were playing on the stairs when I slipped and scraped my leg. The doctor initially thought I was bitten by a spider.

The infection was spreading fast and was eating away at my flesh. I had a tunnel up to my knee cap that had to be packed with fresh gauze everyday. Almost lost my leg.

We were 13 I would guess. Normally I would always stay at my friends place but this time we stayed at mine. My parents took us to the bar which was something people did at the time. Well my father decided to get black out drunk and us two 13 year olds were stuck in a bar from 8pm until 1am. It was getting pretty uncomfortable between the parents and even some of the other people in the bar, cause well kinda sh**ty to have a couple of 13 year olds in a bar on a friday night at 1am.

So when my father got up to use the bathroom my mom grabbed us and we ran out to the van. He came out screaming threw a beer and was banging on the van screaming all sorts of obscenities.

Well we get home, get some dinner finally and my mom goes to bed. My friend and I decide to watch who framed roger rabbit in the living room which I never got to use, but hey dad is gone. Well an hour later he shows up. And he just sits on the couch and smokes pot until falling asleep an hour later.

And that was the last time I ever had a friend over.

Friends decided to set up a mock game of Survivor, based on the reality show.

Which turned out to be an excuse to vote out the friend nobody likes first.

Guess who was the friend nobody liked.

It was like 6 or 7 of us at a friends house. Hot summer night so we’re camping outside in sleeping bags. It’s pretty late/early and we’ve been f**king with each other all night tossing little pebbles running around dragging each other around in sleeping bags the usual.

Well I feel a nudge when drowsy and just waive it off. Then I feel a nudge inside of my sleeping bag and immediately hear a squeaky screech. I scream And everyone Immediately pops up. I’m zipped up in a mummy style sleeping bag so when I stand it’s still wrapped and so is the screeching in my bag.

A quick witted kid named cayde runs overs and shakes my a** out of the bag and a huge f**king bat flies out.

I later harness this fear and become Batman

When I was 8 I had a sleepover at a friends house who lived in the bush. They were living in a dilapidated house on the property while their proper house was being built.

Unfortunately this house didn’t have an inside toilet, rather, a long drop out the back. Double unfortunately that night was a thunderstorm. It was a rule that I had to go to the toilet before bed but one look outside at the rain, thunder and their horse standing between the door and the long drop… I skipped that step.

I ended up wetting the bed that night and her dad wasn’t too pleased with me. I remember her brother coming home in the morning say “ah you’re the one who wet the bed”. My friend also told all our other friends at school.

Not horrific but it certainly affected me.

In high school I went to stay over with my buddy at one of his friends houses and it turned out that it wasn’t really his friend it was some dude from Xbox live that lived in the same town but was for sure older, had to have been in his 20s when we were 16.

Smoked some kind of seed mix that he claimed had some kind of hallucinogenic property, I believe he called it yopo. Anyways, honestly not my worst night but my mom would have f**king died if she knew what I was up to lol

Makes me want to never let my kids go to sleepovers, yanno?