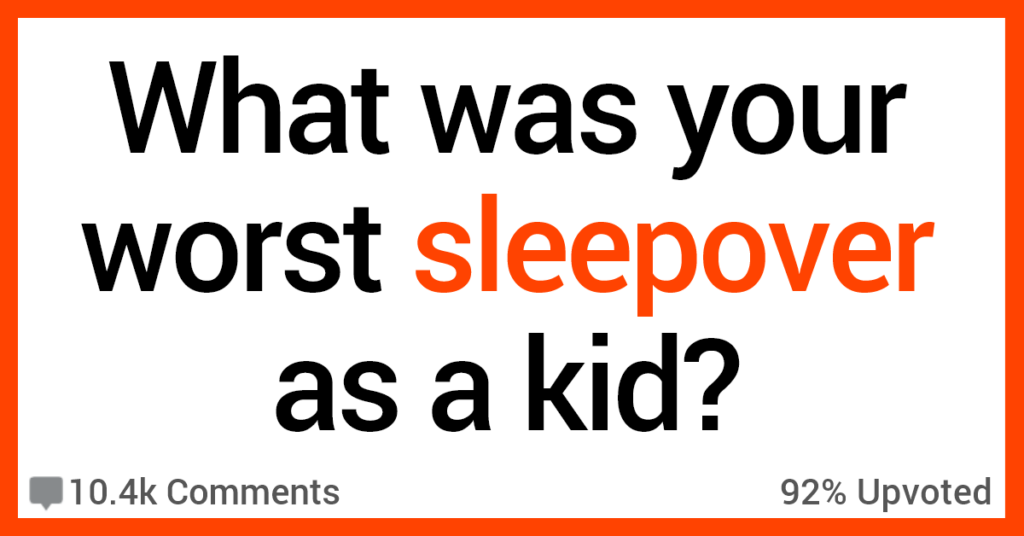 Remember sleepovers? The fun, the excitement, the nerves, the gossip, the Mario Party of it all?

Good times. Except when they’re decidedly not…

What was your worst sleepover experience during your childhood? from AskReddit

Fair warning, some of these sleepover horror stories from Reddit dive into very serious and disturbing territory.

I went over to a friends house. She lives with her grandparents.

Suddenly she refused to let me out of the room. She wouldn’t let me go downstairs, she kept making excuses and wouldn’t let me exit at all. I got creeped out and almost called my Mom but she begged me not to go. Eventually we sorta slept, she had the tv on all night so I couldn’t sleep well.

Years later it was discovered her grandfather was m**esting her. And it turned out that night she noticed he was eyeing us both so that was the explanation for how the night went down.

The next morning we woke up and his mom made us cereal, the milk tasted hella sweet, even for my child taste buds. Something about it all seemed off. Just as my buddy finished his bowl of cereal, his mom came over and turned the bowl on its side to pour the leftover milk from the cereal bowl into a milk carton. The mom then did the same with hers. I felt my face turn red with shame and embarrassment and my stomach turn. Horrified and confused I asked “what is that? What are y’all doing?”

Turned out this sadistic f**k and his ENTIRE family poured all of the leftover milk from each bowl of cereal back into a separate milk carton, specifically for cereal. I drank this entire family’s backwash.

went to a friends birthday party in 4th grade. about half way through the night we decided to play hide and seek.

maybe 30-45 minutes later (all i know was it was a long a** time) i come out of my hiding place to find them playing on the wii in the living room.

they’d forgotten about me and thought everyone was found so they moved on to the next thing without me.

Friend and I went to another friend’s house to sleep the night. We were all mucking around like most 10 year old boys do, to the point our friend’s Dad started yelling at his son. Was a little bit awkward and tense, and then my friend told his dad to “shut up”.

So his Dad decided his son needed some old school punishment and made his son pull his pants down, and made us watch as he whipped him a few times on the bare cheeks with his belt.

I was about 7. I went to a friends place just as his dad got home after accidentally shooting and killing his friend.

I was too scared to leave and it was a big place and i guess we kind of just kept out of the way. His screams of anguish kept me up all night.

was a dark night.

She had ended up behind a 7-foot tall bureau that was placed diagonally in the corner of the dining room. She pushed it over. It was full of plates, glasses, fine china etc.

My parents sent me to spend the night with my friend.

When I got home the next day my mom told me my dad moved out and they were getting a divorce.

I didn’t see my Dad for three years.

Slept over at a friend’s house when I was 9. Her family was wealthy and I was envious of everything she had.

The party was really fun but at 11 pm we heard her dad come home very drunk. After a little while I went upstairs to get some water and saw him pushing my friend’s mom against a wall and threatening to hit her. She seemed so scared.

I went back downstairs and never spoke about it with my friend. But I definitely learned something about appearances that night.

9. The Cat in the Corner

My friend had a poster of the live-action Cat in the Hat in her room and the thing scared me so bad at night that I couldn’t fall asleep and I just sat there on the floor the whole night.

Went to my friends house for the first time. She always wanted to come to my house not the other way around. But never told me why.

So I get there and after the first hour it all goes down hill. The parents had strict rules about eating at the table. Proceed to insult me about my weight (I have always been skinny but not unhealthy so) to the point I nearly cried. After that they do 21 questions about my race and family. By the time night comes I found out they basically have a lock down rule in their house. We weren’t allowed out of her bedroom until morning and I didn’t know that. So I got lectured the next morning. And the end finale was I didn’t know I’d be forced to attend their church in the morning before I could go home. So that’s how I figured out why she always wanted to stay at my house not the other way around.

Bonus. At one point I overheard her parents talking about me when on the phone with her. They called me a few nasty names and slurs for always inviting her to hang out and go places with my family and putting ideas into her head apparently. I will never forget these people.

I was 12. My supposed best friends 17 year old brother played his music very loudly and then shook his junk in my face.

My friend and her brother then tied me to a chair and made me watch a final destination movie that freaked me out.

They then proceeded to laugh their a**es off when I woke up in the middle of the night screaming from a nightmare.

I’m not friends with her anymore.

Had a big group of girls round for a sleepover when we were like 9/10. Slept in a tent in my garden. One girl brings my slightly special cat into the tent for the night. Cats loving it, he’s purring getting loads of attention from this girl and he falls asleep on her.

Wake up the next morning to find a s**t on one of the other girls hair. Turns out the cat had got up in the night, walked over the the second girl, done a poo and then went back to the first girl and fell asleep on her again.

It was my birthday party, I was around 10. I invited all my friends, about 4 of them.

A couple hours into the sleepover, I found out the hard way that none of them liked me, and they had just came to my party to hang out with each other when they kept excluding me from everything and they finally told me.

I spent the whole night crying in my room, but at least they all had to sleep in the floor without blankets or pillows because they didn’t know where to find them

I bled through my underwear and pajamas ALL over my friend’s bed. I was mortified and too embarrassed to tell her.

I cleaned up in the bathroom before anyone else was up.

I then made the bed up before anyone could see it.

I still feel so terrible and embarrassed about it almost fifteen years later.

In a carpool from soccer practice with a teammate/classmate with whom I shared a lot of mutual friends, her mom casually mentioned her upcoming birthday party. The girl angrily shouted at her mom, and in front of other girls in the car, “Thanks for bringing it up, mom, now I HAVE to invite (me)!”

I’m young, so when I got the invite, my mom makes me go. I don’t remember too much about the party, except for when someone decided all us girls were going to relocate our sleeping bags from the basement to the upstairs living room to watch a movie, the birthday girl went down to grab everyone’s sleeping bags. When she brought them all up and everyone was snuggled in, mine wasn’t there. I went downstairs into the basement, and she had purposely left only mine down there. :'(

Well that was a rollercoaster of funny and horrible.

Do you have a bad sleepover story?