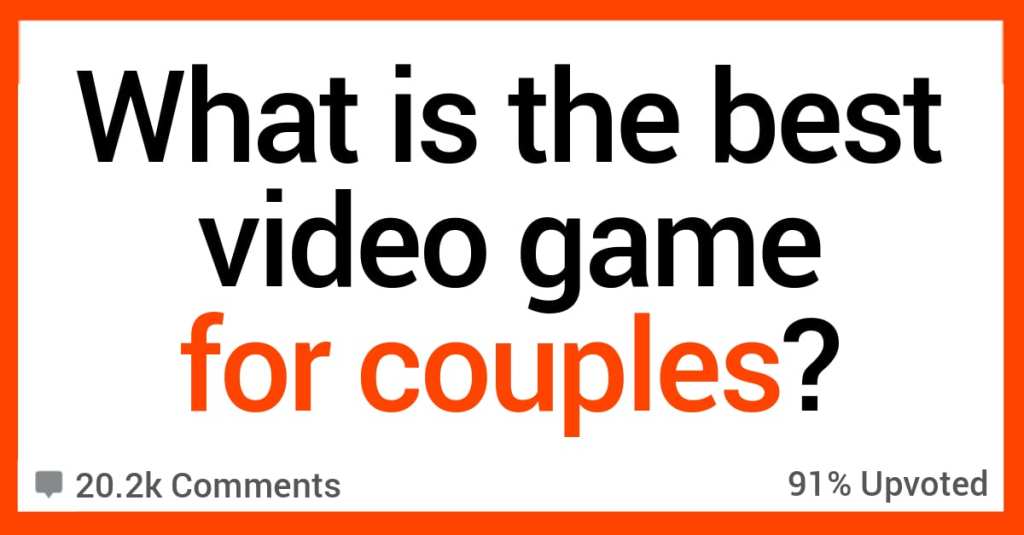 Here Are the Top 10 Games for Couples, According to Reddit

Video games bring us together, and also tear us apart if we rage quit enough times. But there’s often friction in a relationship in which one person commits a lot of time to games and the other is uninterested. It can create a divide, and that’s no fun. Which is why answering this question can be so crucial:

What is the best video game for couples to play? from AskReddit

This was posed to the experts at r/AskReddit and tens of thousands of comments followed. We’ve ranked the top ten responses according to popularity and provided some trailers so you can get a peek for yourself if you’re looking for something to play with your SO!

My wife and I play Dont Starve Together a lot on the PC.

We both have our own PCs and it is such a great time.

Terraria is our go to game to play together.

My wife never got into 3D FPS controls, but grew up playing Mario and DK, so the 2D approach in Terraria is great for her.

It’s a lot of fun, and it works well using phones / tablets as well.

If one of you is a gamer but the other isn’t: Surprisingly, Pokemon GO.

Go for a walk, talk to each other, catch critters.

It’s for two people and it’s where people work together.

Overcooked, if you love a cooperation challenge.

It could also ruin your relationship.

My boyfriend and I played it single player on ps4 and just alternated days in a “takesies turnsies” fashion and had a great time with it!

Trust me you will laugh yourselves to death.

3. Lovers in a Dangerous Spacetime

You both pilot a spaceship and have to cooperate to complete the levels.

It’s super fun and the music is great.

My wife doesn’t really like video games but she loves playing co-op Lego Jurassic Park with me.

So I think most of the LEGO games would work. They are also great if you want to play with your kids.

My husband and I have never laughed harder when we were playing the Boom Town level and one of us kept setting off the bombs.

If you’re seeking a nice fun game to pass the time with your partner at home, check out some of those titles! Game on!