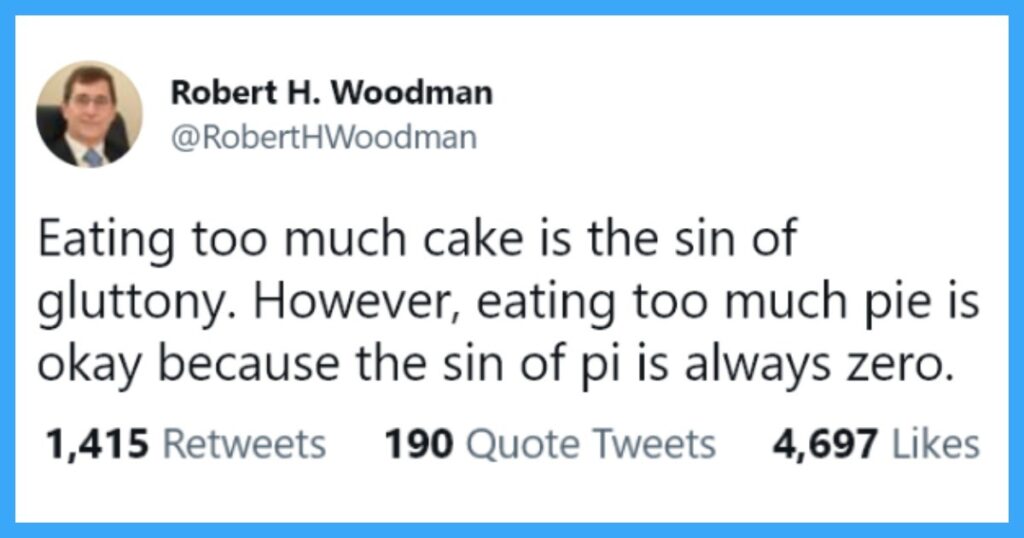 15 Tweets That Are True in the Weirdest Way

Mind you, they’re not right in a way that’s likely to change your life or open your mind to new worlds and perspectives and possibilities. They’re more right in the way that’s going to make you groan and wish nobody had ever invented the internet.

But they might also just make you laugh, and that’s really what we’re here for, isn’t it?

“Oh hey maybe we should stop treating homelessness exclusively as a joke.”
– the kind of thing society eventually realizes

Lmaooooo facts RT @DeionGottaSTFU: Oscar the Grouch been living in a trash can for 49 years https://t.co/z0YFO7LgJd

I’m sure I’m wrong about this but it REALLY looks like she’s taking pictures in front of a urinal.

They probably have no exposure to a BUNCH of diseases we’re aware of, which is why y’all gotta LEAVE THEM ALONE.

You know who probably doesn’t have 1 case of Covid? That Island of people who shoot intruders with arrows on sight. God bless them and I hope they are doing well. pic.twitter.com/nLfjsvZ2RK

Hey, the math is never wrong.

I agree with this, but as an American, I must remain committed to formatting everything stupid.

DD/MM/YYYY
Other formats can be confusing really https://t.co/q56WEQrVdB

Will he give me Wall-E, though? I really much prefer that one.

Nobody: What’s your favorite paradox?

Me: If you ask Rick Astley for his copy of the movie UP, he cannot give it to you as he will never give you up. However, in doing so, he lets you down. Thus creating the Astley Paradox.

Man that is a level of drunk most of us can only aspire to.

Sometimes I think about the guy at my poker table in Vegas who was kicked out after the pit boss said he was too drunk (high bar). Security came over, asked him to say the alphabet starting with “M” and he replied:

He was escorted out of the room.

I don’t know what I expected.

LMAO IM AT MY SCHOOL TALENT SHOW AND DUDE SAYS

“Before I begin, I want to make sure this mic is working”

“If your name is Michael, please stand up”

Then a couple dudes stand up

And he goes “That concludes the mike check”

I think Reading Rainbow might have been a little less magical if they’d have phrased it like this.

And make sure you scream it really loud, that’s the key.

When you ask for someone's name, you're essentially asking them what noise you should make to get their attention.

And you gotta put SO much effort into it.

A diss track is just two grown men sitting in separate rooms, writing poems about each other.

i got botox and i asked the dr “how many years younger will this make me look?” and he was like “zero. you’ll just look like the other girls your age who have also gotten botox.”

My 11 year old just told me that once we get our bunny Hazelnut neutered we’ll have to call him Hazel. 🤣🤣🤣 I hate that she made me laugh because I keep asking them to stop being vulgar.

Boss makes a dollar, I make a dime…

This is called "having a job" pic.twitter.com/jmsim07VP1

Ridiculously correct through and through.