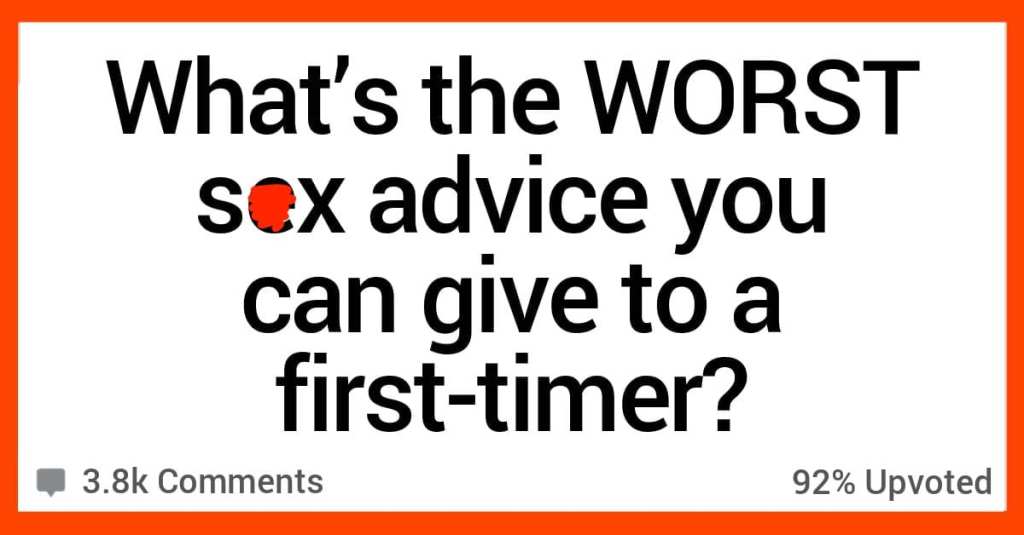 Having s*x for the first time is pretty scary. You don’t know what to do and you don’t want to do anything stupid and embarrass yourself. And it can be hard to figure out what advice is good and bad out there, right?

Here’s what folks on AskReddit had to say about this. And remember, under any circumstances, DO NOT do any of the following things. And, just so you know, this article is NSFW.

“Be friends with her first, then she’ll feel obligated. Be super nice, chivalrous, and buy her flowers. After you pay for a nice dinner, she has to put out: it’s in their biology. Also, the more you spend, the better the s*x.

Don’t be that guy who expects good s*x from $10 and a coupon at Arby’s. Spend at least $25 on her. I knew a guy who spent $50 on steaks and s**t, and that girl was so ready when the bill came, she slid out of the booth like a greased pickle and practically drowned him with hot spidermonkey love.

Girls go for kinky stuff these days. Pull off her shoes and suck on her socks. Slap her knees. Lick the inside of her ear; the sounds of a wet mop in swamp mud will lubricate her lady parts through the Eustachian tubes! Don’t neglect the elbows and spaces between her fingers, either. Cosmo tells them to expect this.

The penis gets automatically sucked and fitted perfectly into the vagina by kegel magnets. If you have to use a hand to aim right, she’s already thinking about your replacement. Just slam it in there, nature will take care of the rest.

Now, don’t come too soon! The longer, the better. Most average men last about two hours, but at three hours, you and her will suddenly go into a euphoria where she will be addicted to you like a narcotic.

Once you’re done, ask her to cook you breakfast and fall asleep.”

“The best way to get laid is to send her a picture of your dick.

Once she sees that, it’ll be all she thinks about.”

It’s awful. Just get it over with.”

“You’re supposed to put it in flaccid.

And if you’re not flaccid? let her stomp on it. that’ll make it instantly flaccid.”

“To impress a chick, helicopter dick.”

“In order to get her aroused, you should strip down to boxer shorts with cartoon characters on them and a pair of black socks.

Then do an interpretive dance for her while playing Taylor Swift’s “Shake It Off” on the stereo.”

“Make sure to douse your private parts in Axe Body Spray before receiving oral.”

“Foreplay is for losers.

If you need lube, it’s because she’s not really attracted to you.

Whatever you do, don’t pee right after s*x. It might sting!”

“Don’t worry about them – focus entirely on you.”

“Your vagina is a Cracker Jack canal.

Place objects in there for him to find during the act!”

“Treat the penis like you’re trying to start a fire with a stick.

Lube’s for losers. If it ain’t dry, they’ll cry.

“Always scream “YAHTZEE” as you orgasm.

Alternatively, scream “UNO” one stroke before you orgasm.”

If there is a question, use more teeth.”

“You’re to maintain a stare in their eyes with no smiling while making no noise throughout.”

“Ask if they have orgasmed every minute.”

“I’m really not the best person to be asking on that.

If you really want to learn, you should have your parents demonstrate for you first.”

Well, there you have it, folks.

Now we want to hear from you!

What would tell people to absolutely NOT do if they were going to get busy for the first time?