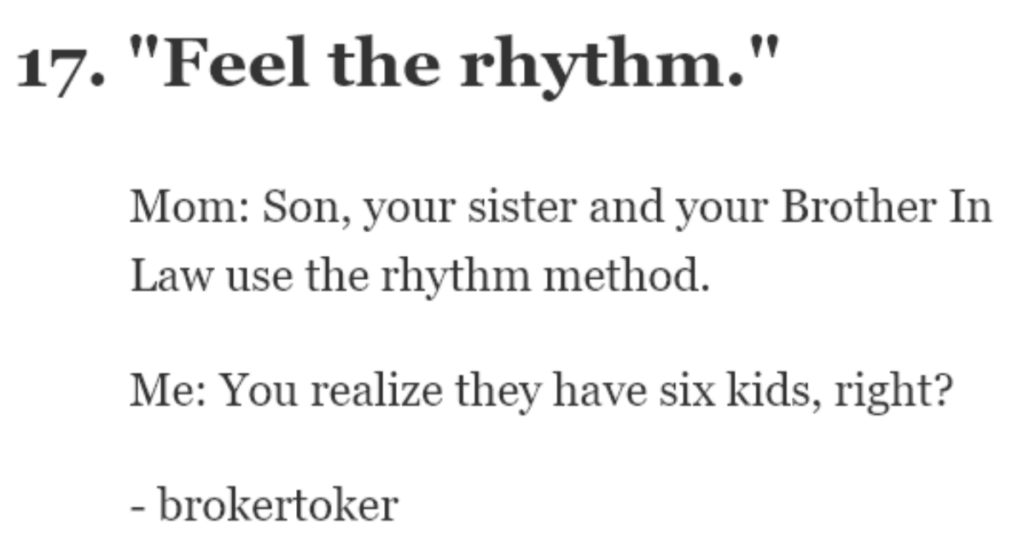 30 of the Worst Pieces of Marriage Advice People Ever Got

For some reason, when you decide to get married, everyone in the world seems to crawl out of the woodwork to offer their unsolicited advice, regardless of whether their own marriage has been any good, or whether they’ve even been married.

That’s an experience a lot of people can relate to. For instance, the folks in this thread on r/AskReddit:

Many of the responses recorded were indeed creepy, and some were just strange.

Here are a few of the “highlights” of advice given to the soon-to-be-wed, courtesy of Reddit.

Cast iron pans are best for beating your husband.

Advice from my aunt.

My MIL told me if I keep “acting smart” it wouldn’t last long and the secret to her 25 years of marriage is always act dumb around the husband.

Met her husband’s mistress few years later. She was a successful lawyer with a PhD.

Not me but at my friends wedding.

She has a SUPER religious section of the family, like of the five siblings, one is a priest, one is a nun, and one is a volunteer youth pastor on the side.

The priest uncle said “just because you’re married now, doesn’t mean you can be lustful. Just remember that s** always under the eyes our lord.”

Her husband is a s** toy designer.

My sister’s in-laws told her to “be understanding if at one point their boy had a GF, it’s something men do when they don’t feel loved or cared for at home, they have different needs and as long as they still provide for their home, it’ll be OK”…

My grandmother gave my husband and I a casual speech on why oral s** is sinful and we shouldn’t do it.

I have no idea where it came from, and I honestly think I blacked out for the majority of it because I have no idea how I responded.

We were just like, “ok cool sounds good moving on…”

LMAO not creepy so much as f**king stupid, but my ex MIL said “a daughter is always her parents’ daughter, but when a son gets married, he becomes his own man and head of his own family and no longer belongs to his parents” so I asked if that meant they’d stop asking us for money since he “wasn’t their son anymore.”

They didn’t find it funny but they also didn’t stop asking for money.

I was told that Jesus was a third “partner” in a marriage and it would be good to have a picture (representation) of Jesus in the bedroom.

A friend told me to take painkillers on my wedding night because “s** is so painful.”

And my SOs friend told him you have to use lube every time you have s**.

We were both really glad we had already had s**, but both felt bad for our friends s** lives.

Not married, but my MIL figure (boyfriend of several years’ mom) told me that I don’t have to use birth control if I “know my body.”

I’m glad I was smart enough to ignore her advice, especially considering that she gave birth to my boyfriend unplanned at 19.

I was present at a marriage (circa 2006) where the sister (22?) of the bride (28?) was giving a prayer to the married couple in the church as part of the ceremony.

She said: “Dear God, please help [Jane] submit to [Steve], so that they might have a happy marriage.”

Eye-opening to say the least.

You know how in most religious ceremonies the pastor/priest sticks some kind of little sermon or message in the middle somewhere?

At my rehearsal it was, “And then I’ll say a little something…”

At the actual wedding it became, “Let’s talk about an important part of marriage…S**UAL FULFILLMENT.”

And we got 5 minutes of that which I’ve blocked in my memory forever.

Not me, my husband. He got given viagra ‘to make sure the marriage is consummated all night long’.

Needless to say, I lost my s**t and made him throw it away.

He was 26 then, with no problems standing to attention so it was pretty dangerous.

My husband is 8 years older than me.

I was told he was only using me for the ego boost of being with a younger woman, and it was only a matter of time until he came to his senses and got with a woman closer to his own age, so I’d better enjoy it while I could.

“Whenever he tells you how to do stuff, you say ‘yes, dear’ and then do what you want.”

Advice from my aunt. I guess it worked on her husband bc he wanted to be the man of the house but wasn’t very smart.

I didn’t even try it, my man is smart and we are partners – we make all decisions together (been married for almost 23 years now).

My mom gave me 2 peaches as a wedding gift and told me “you’ll figure it out.”

15 years later and I still don’t have a clue.

“Don’t forget to work the cl*t, she’ll be a happy bride forever”

I miss the days when my grandma would only give gardening tips or baking tips.

Mom: Son, your sister and your Brother In Law use the rhythm method.

Me: You realize they have six kids, right?

Our father-in-law gave us this key like plaque thing with “remember the secret” engraved on it, and apparently gave us a good talking to at 1am.

We still have the plaque but no idea what the secret was.

I got “She’s your problem now. Good luck.”

Comparatively tame, but the “She’s always right” sentiment of a lot of older couples is insane.

Like, Donald, you spend 6 hours a day away from home because you can’t communicate with your wife and you refuse to actually treat your daughter like a person with her own thoughts.

Don’t pretend like your advice is worth jack s**t.

One of my cousins got married when he was 30ish.

My aunt/his mom (one of the most awkward people I’ve ever met) decided the morning of his wedding was finally the time to explain how s** worked and gave him some quack drops that were advertised to make his p**is bigger.

She made the assumption that the drops were needed based on his dad/her ex-husband.

The cousins were never supposed to know about this, but his brother overheard and immediately texted all of us.

When I was dating my wife, a few months in I was working with her dad for some extra spending money.

I went to lift something and my Father in Law says “Careful with those nuts of yours. You’ll need those.”

I almost dropped what I was lifting.

My father in law said something to the effect of, “If you don’t treat her right, then I’ll kick your a**.”

This being a guy who was married three times, and has two children that he is completely estranged from.

I didn’t object to the sentiment, necessarily, but just coming from someone who clearly gave very few f**ks about the sanctity of marriage or familial relationships, it tickled me.

When I got married I asked my grandpa for advice since the man’s been married for like 6 decades.

Needless to say I did not. Then again, we got divorced 3 years later so, maybe I should’ve heeded his advice. Not sure.

I don’t know if this is creepy to everyone, but it was creepy to me. An old uncle pulled me aside and said, “listen, I’m going to make your life very easy.

Just let her make all the decisions!” I was like f**k that. I didn’t get married to be a doormat, or to have a doormat, for that matter, either.

I married a person.

Not necessarily creepy but bad advice. I was a virgin prior to getting married but one of my best friends advised me not to wear a condom because it “feels better” which was true but let’s just say being a virgin meant that I didn’t last long and my pull out game was quite weak.

Felt the consequences of that advice when I found out my wife was pregnant lol.

My dad drunkenly leaned in and said “men only want respect and women only want attention, then everyone’s happy, that’s all you need to know”.

But things took a turn when my mom cheated on him because he wasn’t “Paying attention to her. “ they promptly divorced. 26 years down the toilet, babyyy.

Not creepy, but the day after I got married I mentioned to my father that I was pleasantly surprised that my uncle had given us a check for a generous amount of money as a wedding present.

My dad said “don’t tell your wife, just keep it for yourself.”

“Don’t s**t in her pillowcase for a laugh, it doesn’t go down as well as you might think.”

My grandmother pulled us aside and said, “kids, everyone is going to ‘give you advice’ about how to be a married couple. Smile. Nod. Say, ‘Thank you, so much!” Then, go right ahead and do whatever in the h**l you were going to do.”

My wife and I (had been loving together 8 years at this point) looked at each other, then we looked at her, smiled, nodded, and replied, “Thank you, so much!”

She just laughed and hugged us.

I really miss her.

Now I’m going to be thinking about that last one for the rest of the day. Were they supposed to plant the peaches? Eat them seductively at each other? Smush ’em together?

So many questions, so few answers.

What’s some weird relationship advice you’ve been given?