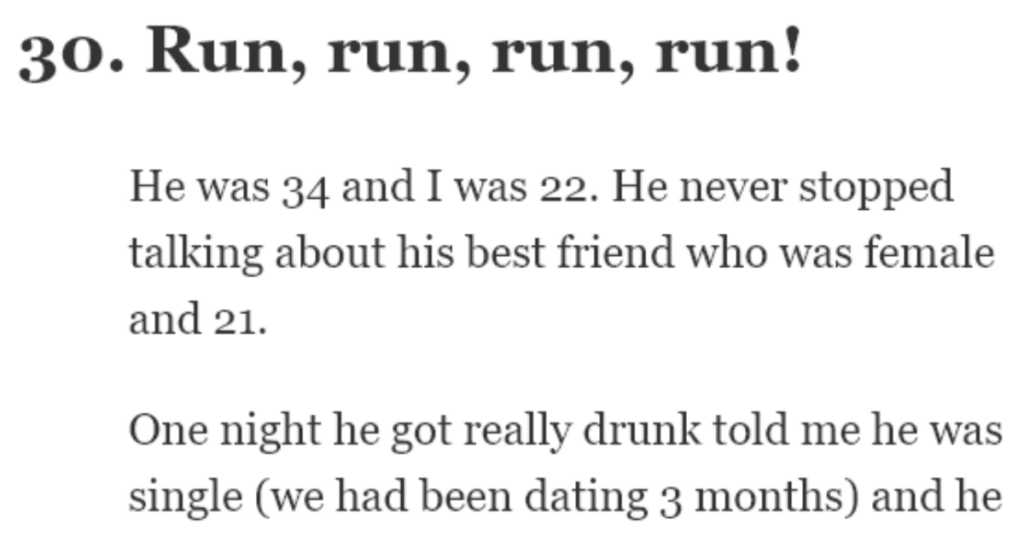 As early as the 16th century red flags have been used as as indication of danger – a warning that something bad is about to go down. I live in Chicago just a couple of blocks from the beaches of Lake Michigan, and when I see a red flag on one of my walks, I know that means “Stay away from the water, it’s not gonna go well for you.”

Sometimes the signals we encounter in our relationships are just about as clear – and yet we might be tempted to just keep swimming anyway. Take for instance the thousands of stories that came flooding in based on this prompt from silver_foks on r/AskReddit:

What’s the biggest red flag you’ve ignored because the sex was good? from AskReddit

Here’s what just a few of the top comments had to say about red flags they’d encountered with their partners. (A lot of this is NSFW – you know how Reddit gets.)

She was married and divorced 3 times by 27.

2. You’re not always the protagonist of the story.

Probably the plethora of empty wine bottles around the apartment, and the knowledge that she’d just gotten out of a long term relationship.

Somehow it never dawned on me that I was the rebound guy.

3. It doesn’t get much more direct…

She basically told me she might cheat on me if she had the opportunity with her ex.

It was my first relationship and I was as stupid as can be.

4. You can read it loud and clear.

We were in a hotel and she would just keep screaming at the top of her lungs.

I kept telling her to quiet down, but instead that only turned her on more.

Only continued because she was my girlfriend at the time and it was pretty good s** for me as well.

5. I need a diagram for this one, please.

She was my ex-wife’s, husband’s ex-wife…

Had an affair with a married woman, she left her husband for me, married me, then cheated on me.

If that isn’t karma idk what is.

7. Simple things can be very telling.

She got annoyed because I told her about a coworker who felt bad about cheating on her bf.

She said “just keep s**t on the DL… Nobody has to know if you keep your f**king mouth shut.”

Immediately knew someone else was deep in her guts.

She stared at herself in the mirror during s**.

Fully moaning, and c**ming, but would never break eye contact with herself,

She cried when I just wanted to make out after our first date. She said I wasn’t serious if I didn’t want to f**k her.

So I f**ked her. And the s** was great, but she was f**king crazy and I bailed after about 5 months.

She called me the n word all the time. We are not black.

All of the lying and bragging about how good she was at it, manipulations, caught her in a lie then caught her cheating and I still didn’t wanna let go.

That s**t hurt deep for a long time.

It must of taken her hours to do all the issues

Always said she was joking but I later found out she was entirely serious.

Obsessiveness, narcissism, codependency, overt stupidity, laziness, lack of ambition, all kinds of stuff.

15. And then there’s this simple entry:

She kept f**king my friends

was hooking up/very casually dating a guy (an idiot) I’d met on tinder. i had a cat at the time, and was leaving for a long weekend so asked him to feed the cat.

i came home and he had moved in to my apartment. like fully moved in. his clothes in the closet, his sheets on my bed, he’d brought furniture from his parents house, and he put his high school hockey trophys on display in the kitchen (we were 26 and 27).

i regret to say it lasted several months, but it did not end well. what a d**k, pun very much intended.

His “ex” kept showing up at his place.

Come to find out months later, they were still together and just fighting.

And I was the unwitting other woman. :\

His savior complex with everyone around us, when we could barley manage.

He would let his garbage overflow and never take it outside. His kitchen was gross. So much drug abuse, he was a plug.

Dated again, within a week he was sending me pictures of him slitting his wrists and saying he could get anybody killed.

He told me he didn’t smoke cigarettes when we met and then a week later he did because “his friend started up again and needed emotional support because he didn’t want to smoke alone” (????)

He also told straight-up told me that if this one friend didn’t like me than I wasn’t “allowed” to be his girlfriend. It red-flagged a bit in my mind because I was like what’s up with this control-freak friend and why do you obey him?

And then I just ignored it for 6 months. His friend would almost never speak directly to me but I was always getting, “friend says you don’t have to hang around if you’re not going to play beer pong for 3 hours for the 4th time this week,” or “we don’t have enough controllers for the Wii U, so if you want to play, friend says you have to buy your own controller because we can’t share,” “friend says that you and I can’t hang out today because he’s upset about something.” etc.

…anyway, whatever the deal was with this friend the smoking thing was definitely in part an excuse, because it quickly became clear (another red flag that I ignored) that he was an addict. He literally needed to smoke something (either cigarettes or weed resin, but usually weed.) like every 45 minutes to an hour and we couldn’t go anywhere because he’d start getting cranky. Not like he ever had money to go anywhere because he had like a dragon’s horde of weed to maintain.

Anyway, he ghosted me, because his friend told him to, I’m sure. I was devastated lol

He legitimately believed his butthole was self-lubricating…

His tattoo of an anthropomorphic pickle smoking a joint.

He liked to put me down.

He’d tell me I was stupid or that I didn’t matter, in a tone that walked a fine line between joking and laughing with me and not joking at laughing at me.

I should have left him sooner but D**N, could he work a c**k

25. That must have been killer good.

I jokingly told him only serial killers and married men don’t have a Facebook and that’s when he told me he was wanted for murder in the U.K.

So I fucked him one last night and stopped answering his calls.

26. Sometimes the red flag also has a little white and blue.

The giant Confederate flag on the wall

Was really pro misogyny. He wanted a girl to save herself for him.

Didn’t want to use condom, but I forced him.

But the s** was good and he was generous with me.

29. A rose by any other name would still have thorns.

He lied about his name. We were just casually seeing each other (FWB) so I never thought to question things.

Finally found out about 6 months in by looking at his license.

Turns out he lied because he didn’t trust having his personal information on the internet (tinder) and never thought to correct it after we started seeing each other. Super weird. I stuck around for a while because no one likes a dry spell but it wasn’t as good after that for some reason.

He was 34 and I was 22. He never stopped talking about his best friend who was female and 21.

One night he got really drunk told me he was single (we had been dating 3 months) and he was mad his best friend told him she loved him but wouldn’t break up with her boyfriend.

He also once mentioned about how her doing a cartwheel when she was 17 turned his d**k into “jelly” I don’t even know what that means.

Remember to listen to your common sense. And let that voice be louder than…yanno…others.