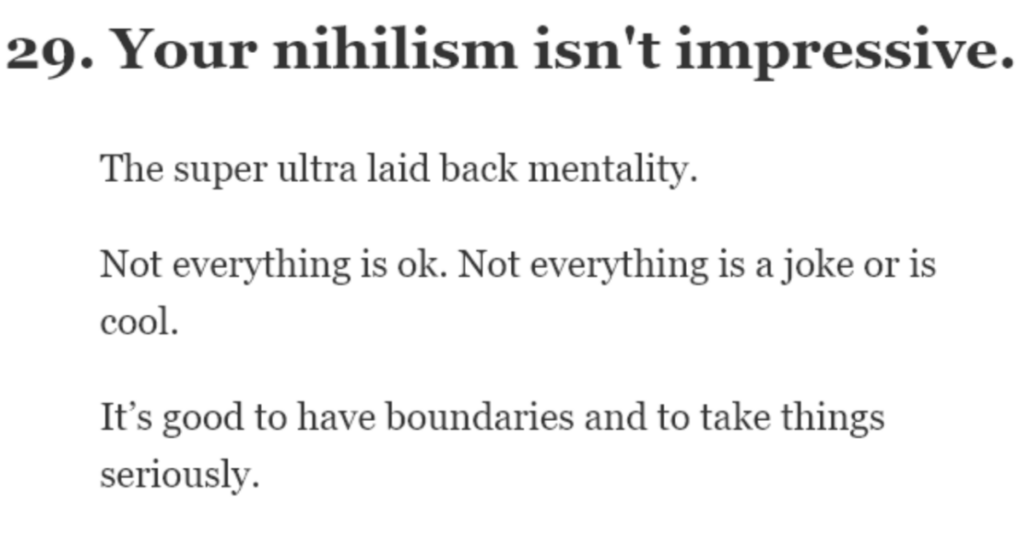 30 Personality Traits that are More Toxic Than They Seem

Today, we’re gonna get all intellectual and raw and talk about morality.

Parsing out what is noble and ignoble behavior is definitely nothing new. It’s been the obsession of religion and philosophy for pretty much as long as we’ve been able to put thoughts into words.

But as time goes on, and fields like psychology become more robust and accessible, the discussion around what’s good and bad behavior has stopped being the exclusive realm of a few, and has become more democratized, with a larger conversation opening up in the general public. A great example of that phenomenon is this post on r/AskReddit by user darkwulf1:

What is a toxic behavior that is disguised as virtue? from AskReddit

It’s a great question, and it prompted a lot of pretty thoughtful answers.

Here are some of the more interesting ones to consider. Take it away, Reddit.

1. I’ve heard this referred to as a sort of martyr mentality.

I had an in-law who talked constantly about how generous and compassionate she was.

She could be both… But she had a tendency to get carried away by what she wanted for you rather than what you actually wanted.

She was the kind of person who would throw a big party for you when you explicitly told her you didn’t want a party, and she would talk constantly about how overwhelmed she was planning the party and how you should help in all these ways because, “I can’t do this on my own.”

Mum says several people on her facebook are ANGRY that they were told their services weren’t needed when they signed up to the towns volunteer service to help folk during this crisis (we had an amazing number of people come forward).

The ones we know who are helping are getting on and doing it. Odd picture or post but certainly not what these people would be doing.

Supporting a person to a fault. In other words, being an enabler.

When people get involved in and regulate other people’s relationships.

They try to act like they’re helping but they always make it worse.

5. Romanticism has given us a lot of bad ideas.

I teach high school and it’s crazy how many times you see a kid basically bully their crush into being with them.

They make this huge public display and the kid is too shy to say no in front of everyone. It’s embarrassing and distressing for that poor kid.

6. As a former academic over-achiever, oof.

Over-studying, over-burdening, and excessive academic anxiety/self-doubt does not make for a dedicated pupil, but an unbalanced and miserable human being.

7. Suffering is not a contest.

When you tell people about how you’re feeling (to vent or when they ask how you’re doing in general) and they one-up you to make you feel like you don’t get to feel tired or sad or stressed etc cause they’re clearly having it harder than you are.

I was tired from school and work one day and I told my old roommate that I was feeling a little tired, and he hits me with “Oh YOU’RE tired? I only had 5 hours of sleep and I had to wake up early this morning cause I had PT (he’s in ROTC)”

8. Don’t validate yourself at the expense of others.

9. As a freelance artist: SCREW. THIS.

This one gets me because companies use it as an excuse to not pay someone or not pay them the amount they deserve.

They claim “exposure is your payment” but last I checked exposure doesn’t pay the bills.

The entire “I hAvE sTrOnG pErSoNaLiTy” kind of people

11. The American worth ethic in a nutshell.

The rise and grind mentality, saying if you’re not working towards something you’re wasting your time.

It’s important to take time to just relax or pursue a passion without monetary gain.

But society as a whole has deemed this as wasting your time.

I grew up thinking that I had a very close extended family until I realized just how sh^tty and miserable most of them were.

I have cut them out and feel so much better about it.

13. Not all that glitters is gold.

Toxic positivity, ie: people who try to find the good in everything.

There’s a lot to be said for having a positive outlook but it quickly becomes toxic when you start defending abusers (I’m sure your parents still loved you in their own way) or trivializing people’s sadness (so you got fired – it just means you get to pursue a new opportunity!).

Sometimes the appropriate answer to a situation is to just acknowledge that things suck.

14. Corporate morality is literally “what can I get away with?”

Yes, you’re saying all the right things and everything checks out if read back on a transcript, but you and I both know you’ve simply found a way to abuse the rules for your own gain.

15. You’re not special for being mean.

People who say ” This is just the way I am; If you can’t handle that, oh well”.

I understand to an extent that if people don’t like you for being yourself, they can go f**k themselves; BUT, if you are a person who seriously does not know how to speak to people or are just rude in general and claim “that’s just how I am”, you’re wrong.

People need to know it is not okay to be rude or obnoxious and that you should be able to know the difference of being yourself and just being a d%ck.

It’s fine to work hard at something you love, but not at the expense of everything else.

It’s always sold in Rom-coms and in relationships.

But usually your persistence is a complete lack of respect for other people’s boundaries or holding onto things that aren’t working out.

People that do good deeds so they can brag about it or use it to their own advantage.

“Look at me, I’m such a good person! I do all these nice things, not because I wanted to be a good person or anything, nope!

Just so I could tell everyone about all the good things I do! Repeatedly. Like all the time. Because I’m a good person, remember?

That’s part of why Kylie Jenner’s whole “self-made millionaire” think bugs me. Even IF she came up with her own ideas and did her portion of the work, she never had to worry about financial support to start her brand, or childcare while she was working, or who was going to cook meals for her and her kid or clean her house. Her lip fillers alone, which are a huge portion of her brand, can cost up to 2000 dollars a pop.

You’re not “self-made” if you couldn’t have done it without your parent’s money.

21. This is called being an enabler.

Being the “supportive” friend/significant other who will never say no even if it’s a really bad idea.

22. Nothing special about being mean.

People that say they’re always 100% honest and aren’t afraid to speak their mind.

It’s definitely useful when needed, but all the time just makes the person seem insufferable and rude.

Being offended on behalf of another person without knowing or wanting to know their opinion.

They are literally just trying to sell more sh^t by piggybacking onto whatever is the cause of the day.

Helicopter parenting, that sh^t scars you, makes you unable to function like a normal adult and struggle to make your own decisions when it comes to responsibility.

Constant self-diminishing and downplaying of your abilities as “humility”.

Just accept and recognize that you’re pretty skilled / have a lot of experience in something, instead of saying that it’s easy, that anyone could do the same and the list goes on.

27. Be vigilant around charisma.

Aggressive self-care — sometimes people use this as a hard stop to get out of things that they do not want to do because you can’t argue with someone saying that they need self-care.

But there’s a line between doing what you need to in order to bolster emotional and mental health and being lazy/taking advantage of people who want to support self-care more.

The super ultra laid back mentality.

It’s good to have boundaries and to take things seriously.

Accepting the objective truth in the form of a compromise.

It’s a pretty fascinating thread to get lost in, and there are thousands more comments to comb through if you want to check out the original page. Remember everybody, be kind. Don’t make excuses. Consider others.

What are some other examples of this sort of thing?