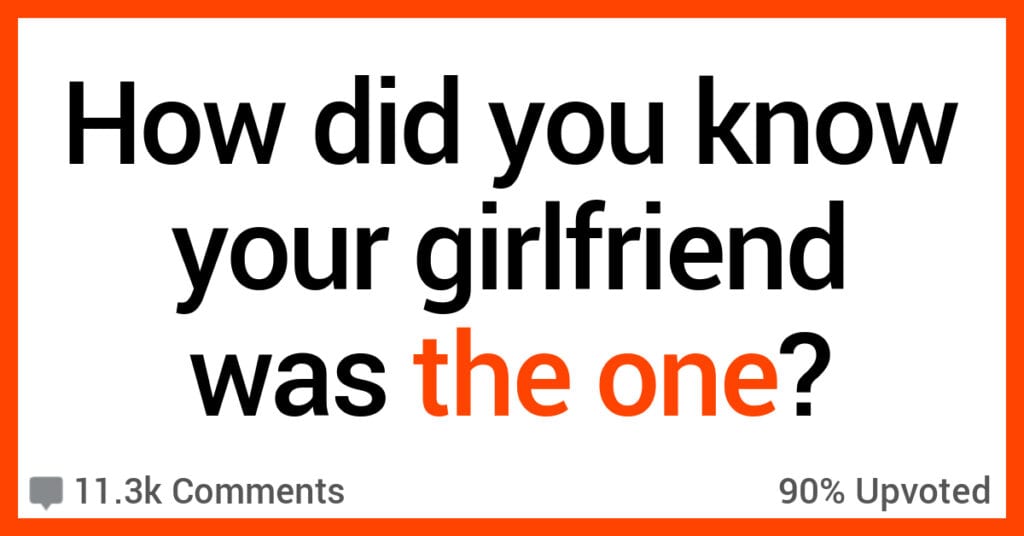 Guys Reveal How They Knew Their Girlfriend Was the One

Finding the right person is hard. It can start to feel like all you’re really doing is trying to avoid bad relationships, rather than pursue good ones.

That’s why it’s nice sometimes to focus on the positive.

Those of you Redditor’s in happy, healthy, and fulfilling relationships, what were the “green flags” you noticed about your partner early on in your relationship with them? from AskReddit

Here’s what Redditors had to say about the things that tipped them off that they were with the right women, specifically.

It was instantly easy to talk to her. I never felt like I had to put on a show for her because she never did with me, and she actively affirmed me in that.

She immediately blew every standard I thought was high enough out of the water.

I hate being tickled, but am very ticklish.

She discovered it early in the relationship, and I asked her once to not tickle me.

She has never tickled me again in the following 10 years.

I have an autistic sister. She’s currently 20 with the mental capacity of a three year old. Not everyone knows how to handle that. Well, 4 years ago when my girlfriend met my family, the two immediately became best friends. My girlfriend has always cared so much for my sister and would even sit with her while i wasn’t home so my mom could go have a life for herself.

To this day, my sister smiles and laughs like a mad man when she see my girlfriend.

I don’t know how much information she can retain but they’ve always loved each other, and i think my gf has had a huge impact on her life

She isn’t afraid to have a different opinion than mine, but she always hears me out and she ALWAYS supports me.

Every time I phrase something about myself in a negative way, she reframes it for me in a different light and more often than not it pulls me out of a dark mood.

In my previous relationship I felt awfully critiqued for just being the person who I was, and that critique would often make me feel guilty for not meeting the standards set for me by my SO. Now that I’ve got a partner who celebrates who I am, I realise all along that I’ve been holding myself back from just doing what makes me happy.

I’ve (26M) been in abusive relationships before this, and it was not until this partner of mine that I really understood what it was like to be in a completely happy, safe relationship.

I knew that I wanted to spend more time with this girl the instant I saw her, and by the time we met a second time, we were already joking about marriage. Soon enough, it wasn’t a joke.

We listen to each other and respect each other. If something is getting too much for me, I still have the ability to tell her and for her not to feel bad about it. She goes out of her way to try the games and shows that interest me, even if they’re out of her comfort zone. She actively asks me what I want to do and she’s perfectly happy to do them, simply because they’re with me.

More than anything, it’s more that we both have this solid idea in our head that whatever we do, ultimately we want to be with each other. There’s no doubt, or suspicion, or feeling that doom is just around the corner. We want each other, and we’re willing to work for it. And I think this is the first time I haven’t had to settle for someone loving me less than I love them. Because when you love someone, it’s not wrong to want them to reciprocate what you’re doing and feeling.

I have crohn’s and was always kinda shame be with someone even if is Just for a night, when i start dating her i thought i won the lottery, zero fear of what she would think because she was always so good to me and supportive, even in the bathroom ahaha best girlfriend ever

Before my wife and I were dating, I very quickly noticed that she always invited the loners to join in the conversation.

If she noticed someone we knew sitting alone she’d always extended an invitation to join or ask their opinion.

If she did something mean or unthoughtful and I brought up that it upset me she would talk it through and if she was wrong, she would apologize.

If it was just something I misunderstood then she would take the time to explain it and the issue was resolved.

Also she brought me my favorite chocolate or other things I mentioned without me ever asking, just because. Man I really love her so much its ridiculous.

Early on, she encouraged me to be more like me.

Things that other people in my life didn’t like about me or things that my ex told me not to do, she would embrace. things like taking risks on new hobbies, seeking attention in conversations, my particular humor; she liked these things about me.

She had a lot of active, long-term, stable friendships. She was still close with several friends who she’d had since childhood, high school, college, etc, despite having moved inter-state multiple times, and she was still making new friends.

Keeping friendships active takes a lot of traits that are important in a relationship partner: good communication, being able to articulate your feelings, empathy, etc.

The only downside in having a partner like that is that their guest list at your wedding is huge!

The green flag that pops out the most is when I biked to the restaurant we met at, she noticed my helmet straps were loose. They’d always been sort of messed up.

Anyways she spent a good 5 minutes fixing them and finally got it to strap properly. It’s silly, but I just loved that she cared enough about my safety to do that.

It’s not perfect, but I knew she actually cared about me on my first birthday with her.

She woke me up before she left for work, left the room, and came back with a sh**ty Walmart birthday cake with a single lit candle, singing happy birthday to you.

This was like a few weeks after we started dating. We got married s few weeks later, she’s the love of my life and we’ve been together for almost four years now.

After cooking me a fantastic dinner after which we watched the playoff game, she asked me to spend the night as we had both been drinking quite a bit.

She made it abundantly clear that s** was not an option and she only wanted to be sure I was safe.

Bruh I’m dating one of my best friends of 11 years, been dating for a year 1/2. Green flag numero uno was the feeling of having such a solid foundation of friendship that any relationship issues we can talk about so easily and not get down each other’s throats.

Any time we’re mad at each other it’s all open and talked about at such a friendly level I love it. Real love man.

We already know exactly who each other are and there’s nothing to hide from, feel like we skipped yeaaaaars of hard relationship work because of it and we can get right to the good stuff and keep on keeping on. Love that girl

First date we were making out and I let out a really gross fart slip out on accident. She deada** looks me in the eye, rips one, and says, “Top that motherf**ker.”

Been married for 13 years.

Don’t it just bring a tear to your eye?