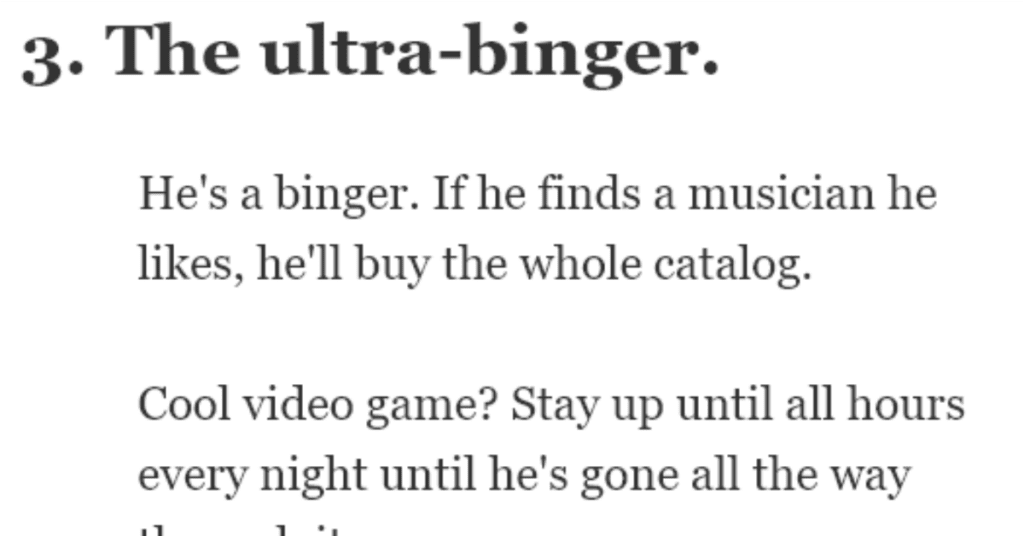 I think it’s probably a very good thing that the stigma of living with someone prior to marriage is quickly falling away in society.

After all, there are so many things about a person you just can’t learn unless you live with them first, and if you skip that step, you’re kinda taking a gamble on the overall compatibility.

I mean, just look at this:

What’s something strange that you disovered about your SO after moving in together? from AskReddit

The people of Reddit know what’s up. Here are their discoveries.

1. Couldn’t you just bundle your socks when you wash them?

We’ve been married a little over 10 years. I just realized a month ago, he lays his socks out every night before bed. Not a shirt, not a pair of pants or his belt, but his socks.

[…] He says he’s been doing it since he was a kid. He hates wasting time trying to find mates. He likes to sleep in as late as he can before heading out the door, this I did know. It’s a time saver. 🙂

We’ve been married for 21 years and I have only heard him burp maybe 2 times and fart about the same. He is also a phantom pooper…. no smell and he’s in and out in record time. It’s so weird.

I’m pretty normal in the gas department but feel like an absolute Neanderthal if I let one rip.

He’s a binger. If he finds a musician he likes, he’ll buy the whole catalog.

Cool video game? Stay up until all hours every night until he’s gone all the way through it.

Good book? Let’s read everything that author ever wrote!

He just tended to binge on something that grabbed his interest.

After I called it to his attention, he became a little more balanced, but he still goes all-in on some things. It’s sorta cute.

I thought he didn’t like my cooking because he would rush into the plate and then not say anything afterwards to me.

Turns out that when he eats something he really enjoys he will eat it REALLY vigorously and then have to recover from his food coma.

She cries all the time.

90% of the time because of the movie/TV show/Podcast she is watching. Other 15% is just random “i’m so lucky to have you” happy crying.

Is both endearing and funny to me.

Her first mistake was when i found out she crys to beauty and the beast music.

Now i will make her dinner and listen to the music while i cook forcing her to come and cry with me or to throw things at me while laughing/crying.

Her adoration of blankets and pillows.

We have far too many for each piece of furniture… And the blankets slowly get accumulated by the dog as bed buddies or humping rags.

My girlfriend is the type of person to get cold easily when going to bed, so she wears socks to sleep. The thing is she never wakes up with socks on.

She takes them off in the middle of the night, and puts them under her pillow.

Since she is sleeping she somehow does not know this. I have looked under her pillow and found 9 separate pairs of socks.

I take those socks, clean them, and put them away for her because she’s hella cute.

8. Why are ya’ll watching each other wipe your butts?

He only uses one square of toilet paper to wipe his a**.

He tears it off the roll, folds it into a triangle (like hotel style) and wipes.

If he needs another piece, he slowly does this all over again.

When brushing his teeth, he doesn’t swish water in mouth using his cheek muscles like a normal person, he vigorously thrashes his head back and forth.

I have been told his older brother does this as well.

At most, she only drinks the first third of any can of pop. Generally, one of the following issues arises at that point:

The center of mass of the can has moved towards the base, making it feel worse in the hand

She is hit harder than any other individual by any volume-based beverage taxes.

Sometimes while he’s sleeping he creeps his way onto my side of the bed.

He also likes to sleep with a fan on but a thin blanket over his head.

So I’ll wake up to a human shaped being two inches from my face.

Wife would make a mistake when cooking, or drop something, and completely melt down in fear of the coming reprisal, furiously trying to make it right.

She doesn’t do this anymore after being married for 8 years.

Everything had to be done exactly her way. Like, if I made the bed and it wasn’t made the exact way she makes the bed, she would complain and make me do it again.

Shockingly, we’re no longer together

Well, my ex, but I lived with him briefly.

He wouldn’t heat up canned food before eating it.

I already find stuff like canned pasta pretty gross, but watching him tear open a can of Chef Boyardee and eat it cold made me gag.

He won’t drink the “basement” of most drinks, he tells me he doesn’t want fries but always eats some of mine instead, prefers occupying the space I’m sleeping in on our bed (“You looked so comfy and warm!”), and is the most adorable drunk person.

He also tries to use dad jokes on me to get his way.. I’m actually not sure what outcome he’s hoping for when he does that.

I’m so confused and scared wondering what a drink basement is now.