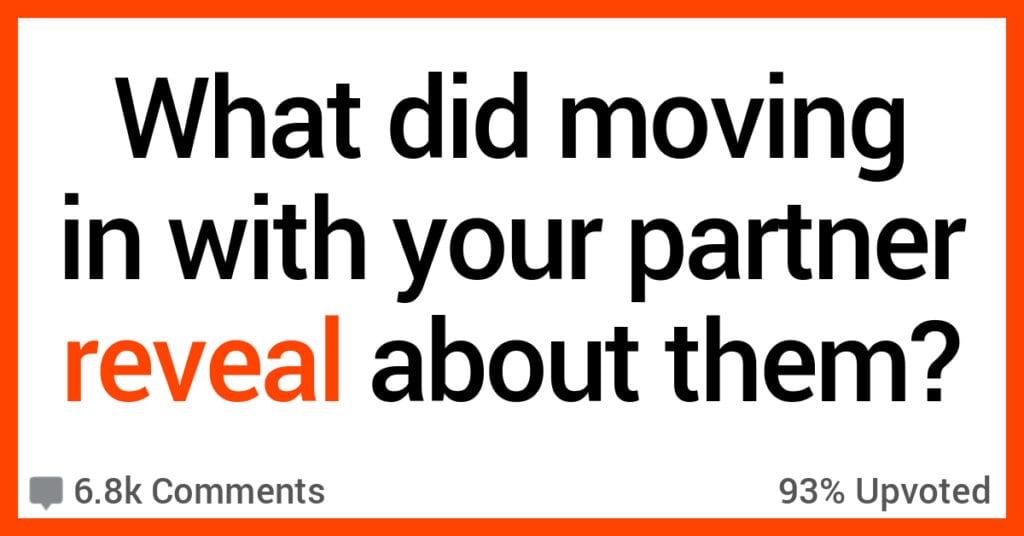 People Reveal What They Discovered Upon Moving in With Their Partner

Moving in with someone is obviously a pretty big step in a relationship, and a lot of folks are understandably hesitant to take it.

After all, what if you do that and you find out something super weird?

What’s something strange that you disovered about your SO after moving in together? from AskReddit

1. No concept of volume.

My husband is deaf (to clarify, I did know this before we moved in together).

The thing is, I had NO IDEA how loud he could be. It should have occurred to me sooner, but he has no concept of his own volume. Listening to him make a cup of tea is like having the cast of Stomp in our kitchen.

The other way around – it had just never come up in conversation that I’m fluent in French.

He seemed skeptical, so he “quizzed” me every so often.

We had dated for about three years before he moved in.

Now he just asks me to translate memes written in French.

3. Get with the program.

He is obsessed with programmable things. Now all of our lamps are programmed so if I walk into a room I have to go “Alexa, turn on the lights.”

It’s like living in some sci fi movie. It’s fun until we get into a fight and then he f**ks with me by doing weird s**t to the lights.

He always brushes his teeth before hopping in the shower. All my life I’ve brushed my teeth after I shower.

It’s obviously a really small thing. But it really stood out to me because I asked him why and he said he didn’t like taking a shower tasting morning breath, preferred a fresh mouth so he could enjoy the shower.

It seemed like such a good reason, in the moment I felt a little dumb doing it my way for so long.

I know the dude has body hair. It’s cute. I like it.

I had no idea that his body hair apparently explodes off him with great violence every time he takes a shower. Shower clogs have gone from a once-a-year thing, maybe, if I do a leg shave after winter, to a monthly thing. It’s all thick, curly brown man-fur.

Is… is this a common thing? Does it happen to other guys?

She opens cereal boxes like Bruce Banner would mid hulk transformation, and she also washes her face by splashing water into her face with reckless abandon.

Bathroom counter looks like the end of a SeaWorld show.

Minus the animal cruelty.

He doesn’t just snuggle me because it’s cute and I’m only over every once and a while, he HAS TO BE the big spoon to something when he sleeps.

Every night he snuggles with me all night, and even when I’m not around when he goes to bed, he cuddles the Pillows, balled up covers, the cat, a piles of clothes…it’s adorable

8. It’s always the quiet ones.

His daughter is the loudest person on the planet, which I already knew.

He’d always say he has no idea how he and babymama have such a loud kid because they’re both so introverted and quiet. Lo and behold, once we moved in together, I’ve quickly discovered that he is incredibly loud on his own, constantly.

Whether he’s shouting/singing literal nonsense at the top of his lungs on the toilet, listening to things on his phone/laptop as high as they’ll go, randomly shouting nonsense close to my head, speaking in obnoxious voices to the cats, or just speaking as loudly as I ever imagined possible for no reason during conversations at home/in the car, he is NOT the quiet person I thought I was dating.

It’s no wonder his daughter constantly yells, he does it all the time for no f**king reason.

When my boyfriend wipes his a** he turns on the faucet wets his a hand a bit (apparently for grip for the toilet paper) and wipe his a**.

She never wants a drink but will always take a sip (gulp) of my drink before I’ve even taken a sip.

If you try and outsmart her and come with two drinks she won’t drink hers.

He combines related words into new words which still make sense because the words he used to combine are obvious. He does it on the fly and does not realize he does it.

12. You can pick your friends…

When she has one or more boogers in her nose. she grabs a f**king tissue, usually sits down next to me, proceeds to pick her nose for 10 straight minutes and starts casually talking to me.

She puts them orderly in a line on the tissue. rarely until her nose bleeds. I´m disgusted and weirded the f**k out by that and she thinks it’s totally normal.

She poops like once for the week which usually results in her clogging the toilet. Then she calls me to help her unclog it! I have become quite adept at it.

If I disturb her sleep at night she awakens and says random s**t. “Chinese restaurant!” And “no I won’t fit!” Are the most recent random things she said while I getting into bed.

When she washes dishes, she fills a dish with hot water mixed with soap, turns the faucet off, dips the sponge to get more soapy water, and rinses all the dishes at once at the end. When I wash dishes, I leave the water on at a low volume, dump soap on my sponge, and wash and rinse every dish before picking up the next one.

Turns out it’s because she’s from California where they learn water conservation habits and I’m from rural MN, the land of 10k lakes and my house had it’s own well-water. Water conservation was a completely foreign concept to me until I moved away from home.

My SO had told me he occasionally slept-walked, but I didn’t know the extent of these episodes until it happened.

One of the first nights we had moved into a room near our college, he kept mumbling angrily in his sleep – no words, just angry noises. Suddenly he jumps off the bed, viciously rips off his shirt, stands for a bit, then turns and falls back into bed.

Next morning he’s very confused as to why his shirt’s on the floor.

A few nights later he apparently wandered out of our room and into the communal kitchen, kinda “looked” in the direction of our confused housemates when they greeted him, then wandered back to our room.

We’re a fun pair because I’m a sleep talker, and he said he once woke up to me reciting a detailed story draft plan (I’m a writer and was completing a creative writing degree at college).

Man, just when you think you know someone.