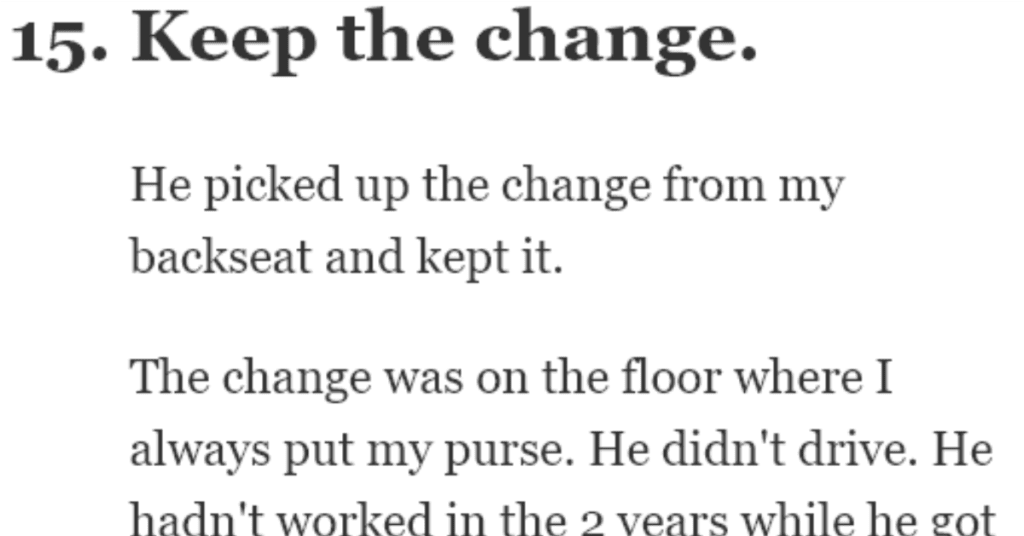 15 Stories About the Little Moments That Finally Broke a Relationship

Some say there’s no such thing as a bad breakup.

The circumstances of the breakup itself might be horrible, sure, but the end result can’t be bad, because it means that a bad thing is now over.

You may find that reasoning a little over-simplistic, but it can certainly help people who are grappling with situations like these:

People whose long term relationship faded, what was the final straw that made you realise it was time to call it a day? from AskReddit

And how DO we finally know it needs to be over? Reddit has stories.

1. The height of materialism.

Her brother was living with us and this was right when WiFi was becoming available to the general public. We couldn’t afford it cuz we were broke a** kids, so her brother would take my GF’s MacBook (it was a gift) and sit on a nearby bus bench and leech off someone’s unsecured WiFi.

Well one day we get a call from her sister and she says we need to get home immediately. Turns out some guys came up and asked him for change for a $20 and when he told them he didn’t have it they tried to snatch the Mac and jump in their car.

He knew it wasn’t his so he held onto it and tried to get it back but they were too much. He had gotten dragged by the car, kicked in the head, and then had his leg run over. He was in pretty bad shape.

As we turn the corner (didn’t know what had happened yet) GF sees cop cars and an ambulance and says “This better not have anything to do with my Mac. We walk in and he’s visibly in bad shape and she is just immediately “Did you lose my Mac?” I’ll never forget his face. He was so ashamed and felt terrible and just started crying. She however started screaming my computer! My computer! And hitting him. To the point where the cops considered arresting her. It was an instant eye opener.

I got to a point where everyday I was alone I’d be rehearsing ways to say “I want to break up” and couldn’t bring myself to do it when he got home. At some point I realized that wasn’t normal and for his sake I should just end it before it goes too far. That was a 4 year relationship

For those wondering, I asked him to meet me in the school parking lot, and I simply said “this is really hard for me to say but it’s the truth, I’m not in love with you anymore and I want to break up”. As the words were starting to leave my mouth, my only thought was “just say the words, don’t do awkward filler s**t you normally do, just say what you need to say and get it over with” best self advice ever lol

My first relationship happened when I was still in university.

I moved in with him a few months before we both graduated.

We started working right after graduation but our jobs had a total different schedule. Mine was during the day, his was in the evening (and often in the weekend).

​We rarely spend time together and I guess we drifted apart.

Then I got the opportunity to go to work in another country and he told me to go for it.

​We still message each other a few times a year but that’s it.

But when she would drink she would get angry at me for not drinking, like I was judging her or lording it over her. Which looking back after years away may have been true. Maybe I was and just didn’t realize it.

But she would get drunk and blackout, I would clean her up and tuck her in and then go home.

Near the end, when this would happen I would call the next day to check up on her and the first thing she’d say was, are you calling to break up with me?

And the answer was always no of course not, until the day I just had to say yeah I think maybe so.

I knew it was over when I cared more about his well being than he cared about his own well being.

I would have moved mountains for him if it made his life easier and he just continuously put himself in s**tty situations. I eventually just gave up.

I can’t be with someone who doesn’t care about themselves. Thank God that’s over.

I was in a long distance relationship and I had this sinking feeling in my stomach whenever the thought of moving came up. Then one day I had a job interview in the city he lived in, which also happened to be a city I had a lot of friends in.

After the job interview I hung out with my friends and had a blast, but the sinking feeling didn’t go away. I eventually realized I wasn’t afraid of moving to the city he lived in, I was afraid of living with him.

He was the kind of guy who was into an ambitious woman in theory, but also wanted her to do all of the cooking, cleaning, etc… I realized that eventually I would become his housewife, because he wanted kids and definitely wasn’t going to help much. That was not the future I wanted for myself.

After 17+ years and she no longer wanted to put in the effort and would rather spend her time on social media talking with everyone but me and ignoring our obvious issues.

So after i finally had enough and took her phone out of her hands and forced a face to face, sit down chat of airing the issues.

In the end it was worth it and never realized how much of a prisoner i felt like in my own home until i had my own life again.

Lesson learned: If you ever feel like your partner has checked out mentally, they likely have and don’t put up with the bulls**t for the next couple years just because you have a long history together. I promise you, it will only keep you miserable

Over time every comment made in their presence sparked an argument.

One day I pointed out a simple deck of cards that I thought were pretty cool and related to an activity we shared and they launched into a tirade about how I was being manipulative and trying to control them.

I knew it was over that day but still desperately tried to hang on for several more months as it only grew worse.

My fiancé and I had discussed having kids and (I thought) were in agreement that we wanted one or two. One day we were having dinner out when she announced she didn’t really want kids after all.

Naturally, I was a bit taken aback and asked if she was sure. She said ‘Well, I’ll tell you what. If we get married and after five years I still don’t want a kid, I’ll buy you a car.”

I have severely limited eyesight. I don’t drive.

That relationship did not last much longer.

I’m still with my husband but I can feel myself getting more and more frustrated with the relationship.

I want more than he can offer me, and I don’t mean that I only want him for what he can provide me. I bring in 70% of our income, I pay 80% of bills and mortgage, I do most of the house work, lawn care, house maintenance. Everything really.

I wouldn’t mind doing all of that If I felt valued and appreciated. I get one full day to be with him and he opted to have a DnD session from 2-10pm. I constantly hear him say he wants to spend more time with me and he’ll call into work, spend maybe 45 minutes with me then go play games or do something else.

I address issues and he’ll change the behavior for a couple days and then go back to it.

I didn’t marry him to have a part time spouse.

He’s a very sweet person, and that’s what I love about him but I just don’t feel that peace I used to feel in my soul when in the same room as him

It wasn’t always drugs. For the first six years it was everything I had wanted. Then meth came along and destroyed us both respectively. Found out she was starting to become a bag w**re, sleeping with people for drugs.

In retrospect, being sober now for a few years, I look back and realize there really wasn’t much substance to us. We were just kind of there, in a sh**ty town barely doing enough to get by. Now I’ve moved and realize all the joys I missed out on

I wanted a nice house, a nice job, a nice life away from people that don’t support the things that make me/us happy. To travel and try new things, to not be stuck to the same 30miles for the next 50 years.

Me wanting more in life and her never wanting to change split us up. I was gonna marry that girl, now I just feel bad for her.

13. Going through the motions.

We’d go out, get dinner, come watch some bulls**t on TV and play on our phones. Started to not be able to have a conversation without forcing it. I hated hanging out with her friends, and she was pressuring me to move in with her which made me realize I had to make a decision and figure out if it was what I really wanted.

This all happened in November so it’s been a lonely pandemic, but I think I made the right choice

I saved up money for a while to take us on a trip to New York City. She was very into fashion, and was obsessed with NYC. We took our trip, had a great time, came back and 1 week later she broke up with me.

Apparently the trip made her realize that she wanted to move there, and she knew that I didn’t want to live in a big city. I was really hurt at the time, but it retrospect it was really the best thing she could have done for both of us.

He picked up the change from my backseat and kept it.

The change was on the floor where I always put my purse. He didn’t drive. He hadn’t worked in the 2 years while he got his MBA, or the 13 months after.

It was clearly my money.

He got upset when I asked for it back. Not angry – upset and confused like a child. That was it for me.

No such thing as a bad breakup? It might be true after all.