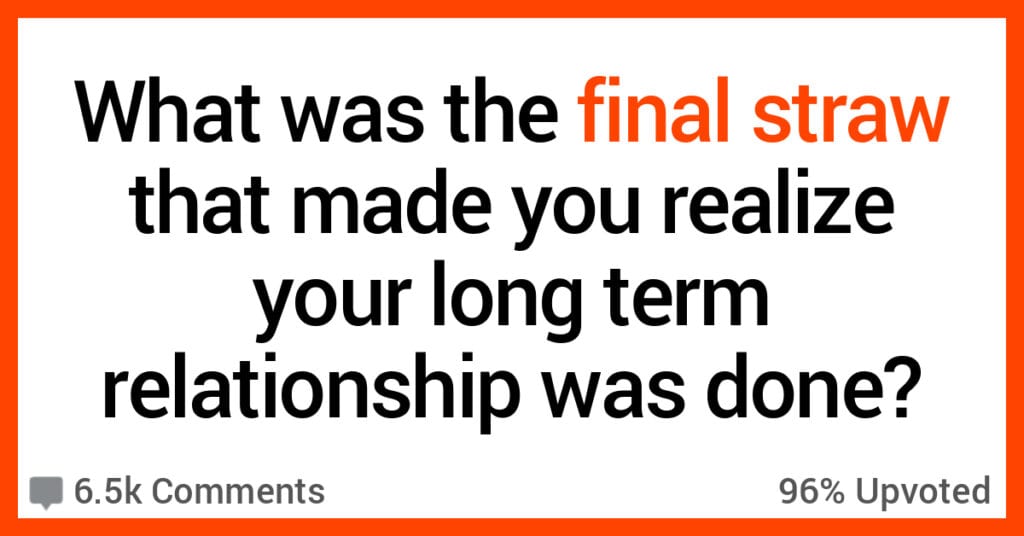 People Reveal the Last Straws That Killed Their Relationships

One of the saddest parts of any relationship is coming to a moment when you realize “Oh, this really isn’t working, is it?”

It’s helpful to recognize those things, as it’s always better to not be in a bad relationship than to be in one, but it can still be extremely difficult to come to terms with.

People whose long term relationship faded, what was the final straw that made you realise it was time to call it a day? from AskReddit

But what are those signs? What are the stories? Reddit’s got tales for days.

We had a long distance relationship and whenever we had an issue or a disagreement, instead of engaging in a conversation with me about it, she would say we were done and shut me out for two or three days before coming back, and manipulating me into groveling for her forgiveness. The last time, I just said no to going back and stuck to it.

She freaked out and tried to drive 6 hours to my place at 2:00 a.m… I got a call from her mom saying she had left in the middle of the night as a head’s up and, upon finally getting ahold of her when she was just a couple hours away, I was able to convince her to turn back.

That relationship f**ked me up for a while but, once I began dating my now fiancee, it was unbelievable to me how wonderful a real, loving relationship with healthy communication can be.

I am a bird watcher (lame, I know) and we were on this trip and I wanted to do this birdwatching tour (it was like a two-hour thing) and he kept putting it off and then eventually I just went alone.

It was by far the best part of my trip. I was really hurt that he didn’t have a few hours to do something I wanted to do, even though I trekked across several beaches to find the “right” surf spot for him.

It was just one of those things were like, he was s**tty, but not indefensible so, and I realized I could do better and be happier. And I am!

Together for 5 years and long distance for 2 of them. I realized one day it felt like just going through the motions when she answered the Skype call. I could see it in her eyes too.

We would sit in silence with our webcams on and barely look at each other. The flame just went out. I eventually just had to sit down and really re-evaluate some stuff. It was a really hard conversation and absolutely broke my heart to tell her, we cried together and had the best conversation we had in over a year.

4. In sickness and in health.

Honestly it was the Pandemic. It really forced us to actually spend time together and I realized we kind of just didn’t do much together at all.

I had spent years thinking it was cool that we kept our own friends and space but once those distractions were taken away it was just really clear to me that we were more roommates than a couple.

I was with someone for a few years but it took a while to occur to us that we really didn’t fancy each other at all and were happy to be just friends and house-mates.

So happy to be just friends that when I bought a flat and moved out, he came with me but to live in separate rooms and have our own lives, while sharing custody of our cats. It worked fine, as there was no romantic or sexual aspect to any of it. Even when we finally went our separate ways, it just happened naturally and calmly.

He’s a lovely, lovely bloke and now happily married with two kids. And to prove how horribly amicable it all was, I was his best (wo)man at his wedding!

The relationship was toxic from the beginning, but we had a kid and leaving would be a big sacrifice.

So I told her that we’re going to take 10 months to really focus on improving our relationship. And if we can’t agree after that time that even one thing has gotten better between us, I’m leaving.

I really worked hard during that time to do relationship work with her, but every time I brought it up, she said all our problems were my fault so there was nothing for her to do. We were in the exact same place at the end of the 10 months, and I started working on my exit plan.

My now ex-husband did some contract work for the facility I work at. My coworker from a different department complimented on how busy I was, and how the hospital was lucky to have me because I did great work.

He said to this person, “well I don’t know how busy she is cause she’s always bugging me. You guys know how it is.”

It crushed me. And made me realize how little he thought of me.

When after going deep in debt, her excuse for not getting a job was that I might cheat on her.

When? Before my first job 75 miles away, or the second I could barely make it to on time after a full day plus driving for the first job?

When she asked where we were moving to, after not being able to pay rent, I simply said I’ve got a place, you are on your own.

We hardly saw each other anymore.

Final straw was: I had surgery and he visited me a few days afterwards.

He brought me a little microwaveable pizza and ate half of it.

We were together for almost 5 years. Lmao

A co worker was talking about a great time he had with his partner and I realized I hadn’t felt like that in years with my partner.

I went home after work and ended.

We both agreed it was for the best.

For awhile, I felt like I was losing my identity to my very controlling boyfriend.

One day, he started hurting a puppy I bought because he didn’t like it. A few weeks later, he choke-slammed me into the couch for leaving a binder under the tv stand. I ran to the bathroom and locked the door. He panicked and tried to take the door knob off. I called his phone so he left to go answer it and I ran out, took his tools, and locked the master bedroom door.

I heard him panicking and calling his mom. He told her that he was afraid I would think it was domestic abuse and report him. She told him that I was just immature and not a submissive enough girlfriend. I realized then that I had been ignoring too many red flags and moved out as soon as our lease expired.

I knew it was over, but a day after my grandfather had passed away and she couldn’t even give me a call to see how I’m doing cause she was at a Halloween party just soured the whole relationship in my mind.

I was worried she was in trouble when she ghosted me for the night, good times.

When I came home from work at 10pm expecting to do homework all night and there wasn’t one single clean pot or dish for me to make myself dinner.

I had just gone back to college after years of putting it off because we couldn’t afford it. I was taking 5 classes and working full-time at a retail job. I was getting very little sleep every night because I just didn’t have time with my classes. My ex worked a regular 9-5pm job with a 15 minute commute and dishes were one of his only two chores (the other was taking out the trash).

When I asked him why he didn’t do dishes, he told me “I didn’t have as much time as I thought he did” and describe how he spent two hours then three hours watching tv. I finally realized I didn’t have a partner and I might as well be alone so I didn’t have to clean up two peoples’ messes alone for the rest of my life.

It was when I noticed that my gf at the time, lied constantly and for no reason.

The final straw is where she made up a situation about a guy are her job trying to hook up with her. I confronted the dude, and he had no idea what I was talking about.

Then my GF acts like she doesn’t know what was going on. At that point I was like, “Is this the person I really want to spend the rest of my life with?”

Dropped her at the spot, and ignored all her calls from that moment on.

Simply put she started becoming something I dread to see. It got to a point where I rather stay at work, something I’m not excited to do, rather than go home.

When she would go visit family or take a long trip, I’d have the time of my life while she was away and it would come to an end when she got back.

I wouldn’t do anything extraordinary the times she was gone just lived life as I normally would. Was my first sign something wasn’t right.

She was having a negative impact on my health all around. That’s when I knew I wasn’t the man for her and she wasn’t the woman for me.

Breakups are never easy, but they are often for the best.