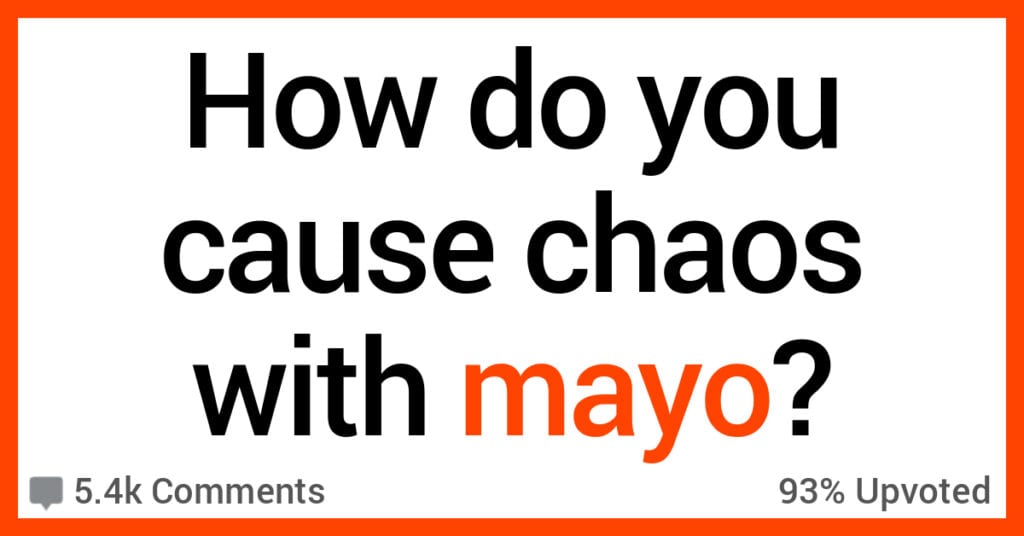 People Discuss How Best to Cause Chaos with Mayonnaise

Yanno, sometimes when I’m surfing around Ask Reddit, I’ll come across poignant inquiries into real social issues that make me think twice about everything.

And then there’s this stuff:

You are allowed to replace any substance with mayo. What do you pick to cause the most chaos? from AskReddit

Agents of chaos, do your thing.

This hits weirdly close to home for me. For a long time my friends and I have measured steam games in “sandwich sterling”.

Which is how many sandwiches you could have bought with the same money. We use it as a comparison of enjoyment. Would I have rather bought two sandwiches and enjoyed them or this one game and enjoyed it? That kind of thing.

Anyway, this would make that literal which made me smile.

No plastic, tires, shingles, no transportation, literally f**k everything over.

I.. uh… You ended earth dude

5. Sperm from a sperm bank

Finally! People won’t give me dirty looks when I walk into a sperm bank with a loaf of bread and ham.

I like it – a bunch of scientists are going to embark on a quest to figure out why it’s just shower water that transforms.

Is it mayo in the pipes? It does it transform in the shower head? What about garden hoses held above your head in a shower-like fashion?

In that case, I’m in possession of a lot of counterfeit

No Patrick, mayonnaise is not an instrument

Gold would make lots of rich people mad, nitrogen would just kill us all

Utah has this incredible thing called fry sauce that is one part mayo, one part ketchup, and then some spices. We eat that s**t on everything.

You would single handedly destroy our entire culture. I promise.

There is no fry sauce anymore. Just seasoned ketchup. Our state would go into immediate lockdown until science could explain what happened.

That tic-tock lady’s hair would be soo moisturized.

These days I bet that’s the most chaos per volume of replaced substance.

Every window, screen and windshield turned to Mayo in an instant.

Almost all electronics become unusable, concrete buildings falling to the ground, and the beaches, oh god the beaches.

Let alone the mayhem under the sea! It’s perfect!

roses are red, violets are blue, i’ve turned clothing into mayonnaise, just to mess with you 🙂

And set construction work back by a few hundred years.

Would cause a massive international crisis..

Watch every government fall overnight, all hail the mayo lord.

But mainly, Mayo in all concrete- that’s a lot of chaos!

All water on earth is now mayo.

So now it rains mayo, we have mayo oceans, and we die because our body is mostly water.

Therefore, we would be mayo.

Society would collapse within minutes

Everything everywhere would be so f**king greasy

Imagine the snow, or Antarctica.

The inuits would live inside mayo.

Probably mayo, especially if everyone is anticipating the change.

The change would have happened, but no one would notice, so every time anyone opens anything they have to low-key expect mayo.

Paranoia will reign supreme as I watch the world spiral into chaos.

What would you choose, and why?

Be weird about it in the comments.