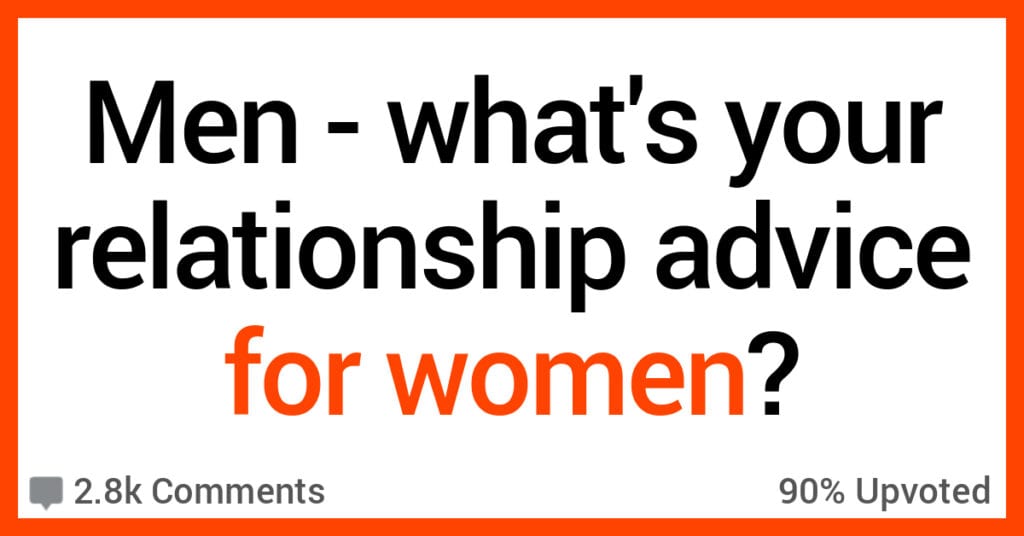 Men Share Their Biggest Pieces of Advice for Women

If you ask me, relationships are all about honesty.

But nobody did ask me, actually.

Men of Reddit: What is the best relationship advice can you give us women? from AskReddit

What say some anonymous men to women in general re: a happy love life? Let’s find out.

1. Say what you mean

Don’t dance around an issue. Don’t make it a game.

Be direct and just come out with it (in a non-a**holish way). You could save yourself a lot of time, potential pain, or the escalation of an argument that wasn’t even on the table.

That’s for both sexes. – SheriffComey

Never think “we should know” what you want or are thinking.

Probably my top advice for anyone in a relationship: DO NOT PLAY RELATIONSHIP GAMES!

Just say what you want, don’t make the other person guess, don’t make them try to win you over. Don’t play the silent game where they have to guess what they did wrong or guess how to fix things.

And, don’t “loyalty test” them or whatever crap. If trust is lacking, tests won’t fix them. Communication and trust will. If that doesn’t work, tests certainly won’t.

Just say what you want. If the other person genuinely doesn’t know and is trying, that’s okay. Don’t make it unnecessarily hard on them.

Longevity in a relationship is about compromises both ways.

If the other one is the only one who always has to bend backwards but you never do, you are not doing it right.

If you go into a relationship with a list of things he does wrong but you want to ‘fix’ in him, neither of you will be happy.

People can make small, incremental adjustments and concessions, but most people don’t make sweeping changes to their personality and habits for the sake of another person.

Both of these things can be concurrently true about people who are in a relationship together.

6. Remember he’s an individual, not just a part of some “man collective.”

Everyone is different, and generalization is so stupid no matter what it is about.

Everyone has different views, morals, motives, needs and aspirations, and people should be aware of that, especially in a committed relationship.

Sometimes men need space to relax and play video games with their buddies.

It doesn’t mean that they don’t love you but giving them some space is so important.

9. Let’s get it started in here

Be the one who engages intimately once in a while.

What I’d give to have a girlfriend reach out and touch me without me doing anything prior. Means a lot to a guy!

If there is a big issue you’re having arguments about with your partner, it sometimes helps to give it a rest and come back to it later.

I guarantee that in that time both will continue to think and come to terms with what’s been said so that upon restarting it’ll go much better.

It’s just not nice to constantly clash over the same thing, non-stop.

And just because it’s not actively talked about doesn’t mean we don’t know it’s there. There is no need to constantly bring it up and bash it in.

11. Our apathy is sincere

Understand that you also have to earn our trust.

In all of my relationships there’s so much emphasis on the guy earning trust from the girl, which is completely valid, but there’s little understanding that it goes both ways.

I also have had bad experiences that close me off, and you shouldn’t take it personally.

Only say you’re “fine” if you actually are.

If you have an issue then say so and we can talk about it, don’t just say you’re “fine” and expect my Neanderthal brain to figure out what you mean.

9 out of 10 times when you ask “what are you thinking about?” And we answer something akin to “how much I love you”

What we really mean is we were thinking of something so random that it makes more sense to just say that instead of explaining for an hour about why aquaman ability to control whales shouldn’t work or possibilities as to why hearing your favorite song play on the radio is much more satisfying to listening directly from your ipod.

Ok well now I don’t know WHAT to think.